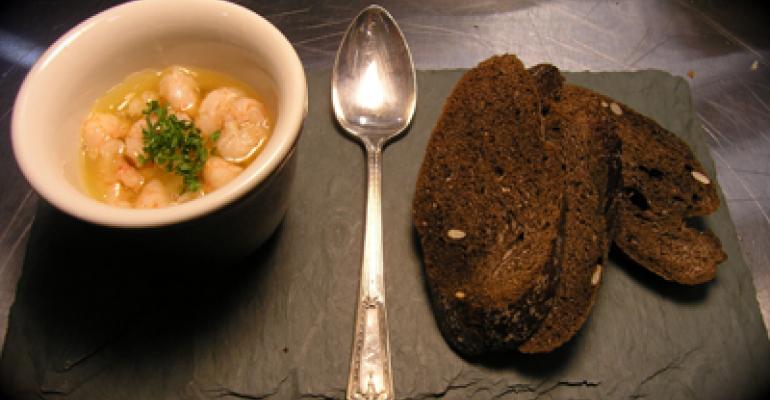 Shrimp dishes around the country

Shrimp is the United States’ favorite seafood by a wide margin. Americans consume an average of 4.1 pounds of shrimp per person each year, dwarfing its closest competitor, canned tuna, of which 2.5 pounds per person is eaten annually.

Most of the shrimp eaten in the United States is farm-raised overseas, but spot prawns from the Pacific Northwest, sweet winter shrimp from Maine, and brown, pink and white shrimp, all from the Gulf of Mexico, add to the variety of available product and allow chefs to promote shrimp from North America.

Shrimp, it seems, lends itself to a wide range of preparations. Here are a few from around the country:

At Jones Wood Foundry, an English pub in New York, chef-partner Jason Hicks originally served traditional potted shrimp, which is a sort of compound butter prepared by cooking shrimp in whole butter with white wine, tarragon and nutmeg. Then, he said, “We put it in pots in the fridge and let it get cold.”

But Hicks’ customers sent it back because they thought it was frozen.

Now, he starts with cooked shrimp and prepares a sauce by emulsifying clarified butter with a reduction of white wine infused with tarragon and nutmeg.

Then he rolls the shrimp in the sauce, presses it into pots, and chills it. The dish is priced at $11.

“Basically, the water doesn’t allow the butter to harden,” Hicks said, meaning it’s not true potted shrimp, but it is more acceptable to his customers.

At Seviche in Louisville, Ky., Anthony Lamas always has a shrimp ceviche on the menu. To prepare the dish for the recent Kentucky Derby, he rubbed wild Georgia shrimp with aji ricoto, a type of Peruvian chile, along with oregano, cilantro, garlic, cumin, coriander and achiote. He let the shrimp marinate for four to six hours and then grilled it.

The shrimp was served chilled with a horseradish chimichurri made with cilantro, parsley, vinegar, garlic, olive oil and horseradish. The dish was garnished with yellow tomato pico de gallo and micro cilantro.

“So it’s a cold dish with horseradish, like shrimp cocktail, but different,” Lamas said. “It’s always a winner.”

Lamas also wraps pickled ginger around shrimp, encases it in a wonton wrapper and deep-fries it to make shrimp flautas. He also prepares flautas by wrapping the shrimp in Serrano ham instead.

At Serpas True Food in Atlanta, chef-owner Scott Serpas serves shrimp a number of different ways. He offers a crispy shrimp tuna roll with mango and avocado; roasts shrimp and serves them with rib eye steak; and prepares a shrimp mousseline that is folded into crab meat and spread on Texas toast that is topped with Parmesan cheese, lemon zest, parsley and chives and then broiled.

One dish Serpas tried that didn’t go over well with his customers, however, was serving the shrimp with their heads on.

He tosses the puree with poached shrimp combined with red onions, scallions, cilantro, diced avocado and diced jalapeño, and serves it in a bowl topped with micro cilantro.

For Subscribers: An in-depth look at shrimp trends