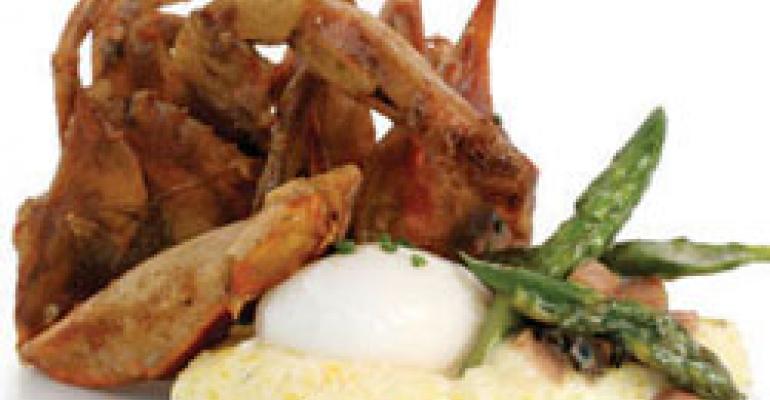 In back of La Provence, a restaurant in Lacombe, La., across Lake Pontchartrain from New Orleans, 30 hens spend their days catching insects and worms and pecking at kitchen scraps—especially carrot and beet peelings, crawfish heads and other foods that will give their eggs’ yolks a deep orange color. They also peck at ground oyster shells, for calcium. At night they go into their coop and lay eggs.

“These birds are specifically designed as egg layers,” says Steve McHugh, corporate executive chef for the four-unit Besh Restaurant Group, which includes La Provence, noting that each of his specially bred chickens gives him six or seven oval orbs a week. They are used as flourishes on such traditional French dishes as frisée aux lardons, $9, and a croque madame sandwich, $14, at La Provence and its sister restaurant, Luke.

That’s a picturesque way to get eggs, and chef-owner John Besh says it pays off in terms of educating his cooks.

“It sounds silly, but how many cooks have reached under a chicken and gotten an egg that way?” Besh says. “Once the lightbulb goes off, and they think, ‘These are sacred,’ it changes how they work with everything. It’s worth it in so many ways.”

But it’s not cheap.

“It’s twice as expensive as what it would take for me to buy an organic egg,” he says. “But even at twice the expense, it’s still one of the most cost-effective ingredients.”

Practically everything that comes into a kitchen is more expensive now than it was a year ago. Estimates of how much more it costs to get eggs into a restaurant start at 15 percent and go up from there.

“In Denver they’ve almost tripled in price,” says Jennifer Jasinski, chef-owner of Rioja and Bistro Vendôme in that city.

But many chefs say eggs are still among the most economical ways to add a touch of luxury.

“They’re so rich and delicious,” Jasinski says. “I like any excuse to put eggs in dishes.”

Bistro Vendôme’s brunch menu has a pulled-chicken crêpe Provençale. Jasinski pulls the meat from roast chicken leftover from dinner and sautés it with tomatoes, olives, capers and basil. She mixes that with hollandaise sauce and fills a crêpe with it. A sunny-side-up egg goes on top. She charges $7 for it.

“The yolk adds a great richness to things,” Jasinski says.

“To me, an egg on a somewhat rustic dish adds a refined touch to it,” says Chris Parsons, chef of Catch Restaurant, which has locations in Winchester, Mass., and on Martha’s Vineyard.

This spring he’s serving soft-shell crab on polenta with asparagus, morel mushrooms and tasso ham. The $27 dish is finished with a poached quail egg topped with fleur de sel. The yolk breaks and oozes over the crab.

“It really brings the whole dish together,” Parsons says.

Mark Estee, the chef of Moody’s in Truckee, Calif., takes a similar approach.

“We’re big believers in the egg out here,” he says. “An egg adds so much flavor to a dish, and I love using the yolk as a sauce.”

He makes a rich, cheesy polenta, spoons sautéed seasonal mushrooms over that and tops it with a sunny-side-up egg.

“I get the edges all crispy,” while keeping the yolk runny, he says, adding that he tops it with pepper and Maldon sea salt.

He also cooks pig trotters overnight, picks the meat and binds it using the gelatin from the trotters. He shapes that into fritters, griddles them and tops them with a poached egg and a gribiche sauce.

Estee gets his eggs from local farmers who raise a variety of fowl. So sometimes he uses eggs from chickens and sometimes from ducks, which are a bit larger and have a much larger yolk.

He can pay as much as $5 for a dozen high-end, superfresh eggs, but even so, the mushrooms in his polenta dish contribute more to the food cost than the eggs do.

North Pond, a fine-dining restaurant in Chicago, has had some sort of egg appetizer on its dinner menu since it opened ten years ago.

“It’s a wonderful start to a meal,” says executive chef Bruce Sherman. “It’s European, it’s classic, it can be paired with so many things. The possibilities are endless.”

Lately he has been putting a soft-boiled egg on a purée of morels, fava beans, shallots and tomatoes in a crispy potato nest. He finishes that dish with baby greens and shaved prosciutto and sells it for $12.

Sometimes he poaches the eggs. Sometimes he serves them creamy and scrambled, as he did recently, slowly cooking the eggs with crème fraîche, Dijon mustard and tarragon. He served them in the eggshell, topped with a morel ragoût and fresh herbs, with a crispy Parmesan stick wrapped in lardo or prosciutto alongside.

Sherman sources mostly local, sustainable products, which means he spends more for an egg than many restaurants would. But they’re still relatively cheap.

Last winter he had duck eggs on the menu, for which he paid about $6 a dozen. He says they’re “a little looser,” than chicken eggs.

“They have more viscosity and a huge yolk,” he says, “at least 40 percent larger than a hen yolk—not quite as intensely sunshine golden, but still nicely rich and fatty, but in some ways a little leaner in the mouth.”

He poached them and served them on an apple-fennel compote in a spinach-Parmesan coulis.

Travis Timberlake, chef de cuisine at DC Coast in Washington, D.C., also used duck egg in an appetizer this winter that sells for $13. He roasted a portobello mushroom brushed with truffle butter and some truffle oil and served it over polenta with a porcini-veal demi glace. He topped that with a sunny-side-up duck egg, seared on his plan-cha, and finished it with cracked black pepper and shaved Parmesan.

“It’s something different, it’s got a little bit more gaminess,” he says of the duck egg, adding that it’s larger, so it covers the mushroom.

Timberlake gets regular eggs for $1.71 a dozen. He sources duck eggs from a New York game supplier. They’re more expensive than chicken eggs, at $2.61, but he says that’s still “not too bad, specially considering the rising prices these days.”

Tom Fleming, executive chef of Central 214 in Dallas, says eggs are becoming more popular on nonbreakfast items. He says such items need to be sold to customers at first, “but once they try it, they love it,” he says.

For spring he is offering a warm ragoût of green lentils topped with a salad of baby frisée and duck confit, garnished with a poached egg. He charges $12 for the dish.

“That richness of the egg along with the duck, and a little bitterness of the frisée, blends really well on the palate,” he says. “And lentils—lentils are just pure love.”

For VIPs he’ll sometimes serve a poachedegg Rockefeller, which is creamed spinach that he puts in a gratin dish, browns under a broiler and accompanies with a poached egg on top.

At Broadway East, a new restaurant in New York City that caters to vegetarians, although some meat items also are on the menu, chef Lee Gross roasts asparagus, puts it on an asparagus purée enriched with a local farm-stead grana cheese, puts a poached egg on top and then lays a sheet of lasagna pasta over it all, hiding the egg, “so it’s kind of a surprise” when guests cut into it and the yolk runs over the asparagus.

“It’s so simple to execute, but so satisfying,” Gross says. “The egg adds a sensualness and deliciousness to it.”

He charges $16 for the dish. David Regueiro, chef of Solace, also in New York, also uses eggs and asparagus as a dinnertime starter. He makes a salad of baby arugula, poached asparagus, 12-year-old sherry vinegar and olive oil. He finishes it with crispy shallot rings, which are similar to onion rings, but smaller. He charges $9 for it.

“You get some real nice fat pieces of asparagus in there, but I wish I could sell eggs for $9 all day,” he says.

At the Lazy Goat in Greenville, S.C., chef Lindsay Autry follows an Italian tradition of cracking an egg in the center of a pizza. Thin Italian pizzas cook quickly, so when they come out of the oven the egg yolk is still runny, and diners can dip the rest of the pizza in it.

“Think of it as how you eat toast in the morning and dip it in the yolk of a sunny-side-up egg,” she says.

She par-cooks an oblong flat bread with some olive oil at 650 degrees Fahrenheit. She adds Pamplona chorizo, shards of Fontina cheese, raw slices of fingerling potato and more olive oil all around the outside. She cooks that to let the cheese melt and the potatoes crisp up. Then she pulls it out again, cracks an egg in the middle and puts the pizza back in the oven for another 45 seconds. She cuts the center of the pizza with a ring mold and then slices the rest of the pie, so the center can be used for dipping.

“Then you basically crack two eggs over it and bake it like that.”

It’s served as a Sunday dinner special with naan bread for $16.