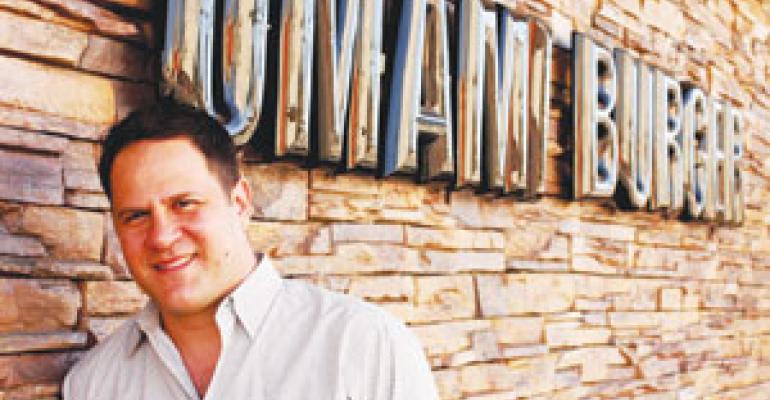 Terms of the deal were not disclosed, but SBE is joined in the investment by Nimes Capital, a Los Angeles-based private-equity firm with family and investment ties to SBE.

Umami Restaurant Group was founded by Adam Fleischman, who remains chief executive and continues as majority partner. The group is known for its five-unit Umami Burger concept in the Los Angeles area.

A fast-casual version of the concept — to be called U-ko — will debut in Los Angeles later this year and is targeted for national expansion, along with the casual-dining Umami Burger.

Fleischman said he plans to open at least 25 locations between the two variants by 2013.

Founded by Sam Nazarian, SBE is known for multiple restaurant and nightclub concepts as well as hotels. The entertainment group includes the SLS Hotel and famed foodservice concepts under The Bazaar by Jose Andres, as well as The Redbury hotel and its restaurant called Cleo. Other venues include XIV by Michael Mina. The group also operates the iconic beach-side restaurant Gladstones.

In addition, SBE owns the rapidly growing high-end Asian concept Katsuya, which has five locations with two more scheduled, and an Italian concept that is expected to open this fall called Mercato di Vetro.

Nimes Capital is lead by David Nazarian, who is Sam Nazarian’s brother and chief investment officer of investment firm Nazarian Enterprises. Under the new partnership, both Sam and David Nazarian will join the board of the Umami Restaurant Group, which will operate as a separate company, not as an SBE brand, Fleischman said.

Fleischman said the investment will enable Umami Restaurant Group to expand its other brands.

Under construction is a pizza concept called 800°, which Fleischman sees as a potential growth concept.

In November, Fleischman also is scheduled to open the first UMAMIcatessen in downtown Los Angeles, which will combine the Umami Burger menu with that of a kosher deli and charcuterie bar. The concept also will feature dessert station.

Fleischman also owns the restaurant Red Medicine in Beverly Hills, which is a one-off concept with an Asian-inspired menu.

The main growth vehicle, however, will be Umami Burger and U-ko.

Sam Nazarian, SBE’s chair and chief executive, described Fleischman as one of the industry’s “visionaries,” saying Umami Burger has established itself as an “authentic piece of pop culture.”

“The growth potential for the brand is undeniable and we’re eager to showcase Umami with burger lovers nationwide,” he said in a statement.

Three Umami Burger locations are scheduled to open before the end of the year, including an inaugural location in San Francisco as well as in Orange County south of Los Angeles.

A second phase of growth will focus on such markets as New York, Miami, Las Vegas and Houston, Fleischman said.

The first U-ko location is scheduled to open in Los Angeles later this year.

Describing it as “my version of 21st Century fast food,” Fleischman said U-ko will have an environmentally friendly design and guests will order and pay via iPad.

Founded in 2009, the original Umami Burger concept was created as a fast-casual brand, with customers ordering at the counter and then having their food delivered to the table by staffers. Later versions offered a more casual-dining format with some offering a full bar or beer and wine.

The menu is designed to highlight the notion of umami — what the Japanese refer to as the fifth taste, a savory deliciousness that comes from glutamate and other naturally occurring elements in certain foods.

The chain infuses its burgers with umami-rich flavors, such as truffles, anchovies, tomatoes, kombu, soy, parmesan or shitake mushrooms.

The top seller is the classic Umami Burger, which includes an all-natural beef patty, ground in house and never frozen, cooked medium rare and topped with a crisp parmesan cheese tuille, a grilled shitake mushroom, roasted tomatoes, caramelized onions and a house-made ketchup.

SBE is planning to open a new hotel in Las Vegas, and an SLS is opening in Miami in 2012.

In addition, the Umami group will be able to leverage SBE’s well-developed infrastructure, from information technology to human resources, Fleischman said.

“Partnering with SBE and Nimes represents an opportunity to work with hospitality industry leaders known for developing, operating and expanding some of the most successful food and beverage brands in North America,” Fleischman said.