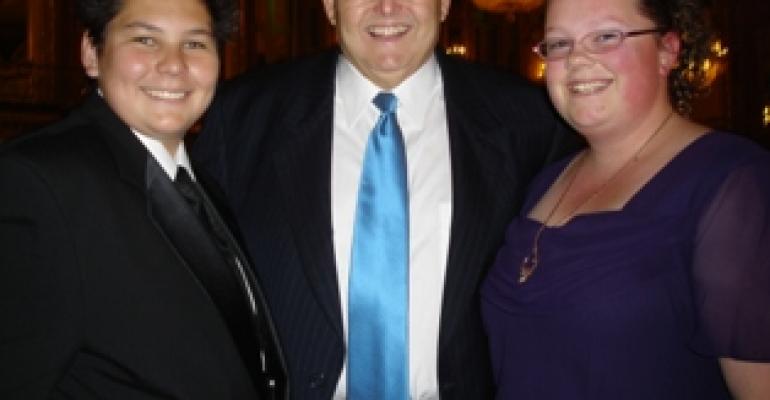 Both longtime and rising leaders of the restaurant industry gathered Saturday night to celebrate the importance of education in foodservice at the National Restaurant Association Educational Foundation’s annual Salute to Excellence.

The gala event, held at the Hilton Chicago on the first evening of the NRA’s Restaurant, Hotel-Motel Show, recognized not only about 200 college students and their hospitality educators, but also the achievements of industry luminaries Ferdinand Metz, S. Truett Cathy, Jerald Chesser, Alice Elliot and Denise Fugo.

In his remarks while accepting the foundation’s Michael E. Hurst Lifetime Achievement in Education Award, Metz called teaching “as close to immortality as you will ever get.” Metz’s own legend is quite formidable, as he served as president of The Culinary Institute of America for 21 years and now is president emeritus, in addition to being a past chairman of the NRAEF. Today Metz leads two hospitality consulting companies, Ferdinand Metz Culinary Innovations and Master Chefs’ Institute.

He also paid tribute to the lifetime achievement award’s namesake, Michael Hurst, a mentor of his who taught Metz that “at the end of the day, we’re only one industry: the industry of hospitality.” To honor his late friend, Metz led the audience in reciting Hurst’s well-known motto for the restaurant industry, “We’re glad you’re here.”

Metz parted with another show of gratitude to foodservice educators, saying that teachers “took the rocky road less traveled, but it’s [a] more rewarding [road].”

S. Truett Cathy, the founder and chief executive of Chick-fil-A, sounded a similar note in his speech accepting the Thad and Alice Eure Ambassador of Hospitality distinction, saying his life growing up in the Great Depression taught him to enjoy life in times of poverty as well as plenty, and affected his desire to give people a chance to succeed at his company.

“You can do anything if you’re determined to do it,” he told the many students and educators in the audience.

The NRAEF noted that the scholarship program at Chick-fil-A, which Cathy started in 1973, has given more than $25 million in $1,000 grants to the chain’s employees and will award $1.4 million in scholarships this year.

The foundation also inducted three members into its College of Diplomates: Jerald Chesser, professor at The Collins College of Hospitality Management at California State Polytechnic University, Pomona; Alice Elliot, founder and chief executive of The Elliot Group; and Denise Fugo, chairman and chief executive of Sammy’s, a fine-dining restaurant in Cleveland that now specializes in banquets and catering.

The NRAEF also highlighted achievers from its ProStart program that prepares high school students for careers in the hospitality industry. Two ProStart educators, Bonita Curtis of Fairmont Heights High School in Maryland and Judy Uerling of Clovis High School in New Mexico, received the James H. Maynard Excellence in Education Award. The winning teams from ProStart’s national culinary and management competition also walked across the stage to applause from their future peers.