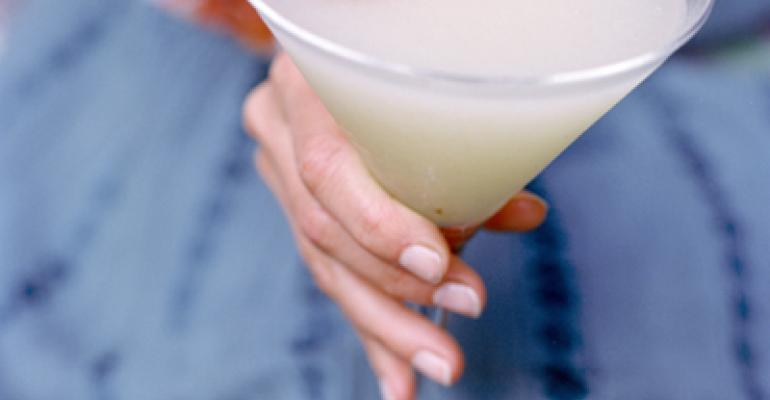 Some operators are pouring novelty-seekers a product that until recently was seldom seen outside Japanese eateries — premium sake. They’re mixing the fragrant rice-based beverage into signature cocktails, substituting it for wine and spirits in sangria and pouring it as an accompaniment to cuisine. In some cases, they are touting it as a gentler alternative to high-proof liquors. Indeed, they are taking it far beyond its Japanese roots into a variety of settings in which fresh, high-quality, handcrafted beverages are the rule.

An example is Pure Food and Wine, an upscale raw food restaurant in New York City, where one of the best-selling drinks is the Pure Mojito, made with organic ginjo sake, fresh organic mint and lime juice and a splash of cava, priced at $13.

“It has been a real crowd-pleaser since day one,” said beverage director Joey Repice. “Rum is a very distinctive spirit, but the sake in this mojito is a lot cleaner and lighter. It’s refreshing, not overbearing.”

At Aviary, a restaurant in Portland, Ore., with an eclectic menu of small plates and a penchant for local foods, Sake Sangria is the new warm-weather refresher. Ginjo sake is mixed with Oregon pinot gris, plum wine, white grapefruit juice and vodka, plus oranges, grapes and cucumber chunks. It is priced at $5 per glass.

“The sake gives a lot of different flavors and complexity you normally don’t get with sangria,” said co-chef Jasper Shen.

Although sometimes called rice wine, sake is a fermented beverage more akin to beer in its manufacture, although quite different in character. It is made in a traditional process from steamed rice, water, yeast and a mold called koji, which transforms the rice into fermentable sugars. Sake quality is greatly affected by the degree to which the outer surface of the rice grains are polished, or milled away, prior to fermentation. Highly polished rice makes a purer base for brewing high-caliber sake. For example, the grade of sake called junmai is made with rice from which at least 30 percent of the outer grain has been removed. Ginjo sake goes even further, removing at least 40 percent.

Sake comes in an array of styles for matching with food or mixing cocktails. It can be refined, dry and crisp, off dry or fruity and highlighted by hints of melon, green apple, pear or tropical fruits. The alcohol content runs 15 percent to 17 percent, slightly higher than wine but far lower than distilled spirits.

According to sake producer Dewey Weddington, vice president of SakeOne in Forest Grove, Ore., the product’s unique flavors, mixability and overall novelty in the market make it a good choice to promote to customers who seek new experiences, such as young adults.

“They are exploratory and looking for things that Mom and Dad are not necessarily drinking,” noted Weddington.

Repice beckons to sake newbies with libations like the White Light Tini, which gets a milky white color and depth of flavor from unfiltered sake. Lemon grass, ginger and green tea add further palate impressions.

“People are amazed when they experience a high-quality sake for the first time,” said Repice. “It is worlds apart from a lower-quality product.”

At Aviary, ginjo sake was seen as a more complex, less sweet alternative to the wines and spirits typically used in sangria recipes, Shen said.

“We are big fans of sake and we totally understand the nuances that it gives, as opposed to straight-up alcohol or overly sweet white wine,” said Shen.

Some people see premium sake, because it is relatively low in alcohol and free from preservatives, as a more benign tipple than distilled spirits.

“Sake is a lot better for you than actual vodka,” said Brittany Williams, a bartender at Matthew Kenney OKC, a raw foods restaurant in Oklahoma City, Okla., that features saketinis like the Violet Hour, made with unfiltered sake, lavender, blueberry and lemon. “We had some organic vodkas we were using, but we are actually going to phase them out.”

Repice said that the organic sake served at Pure Food and Wine is consistent with the restaurant’s mission of serving raw, unprocessed, plant-based foods.

“There are a lot of people who say that sake doesn’t really give you an intense hangover because it is gentler on the system,” he said.