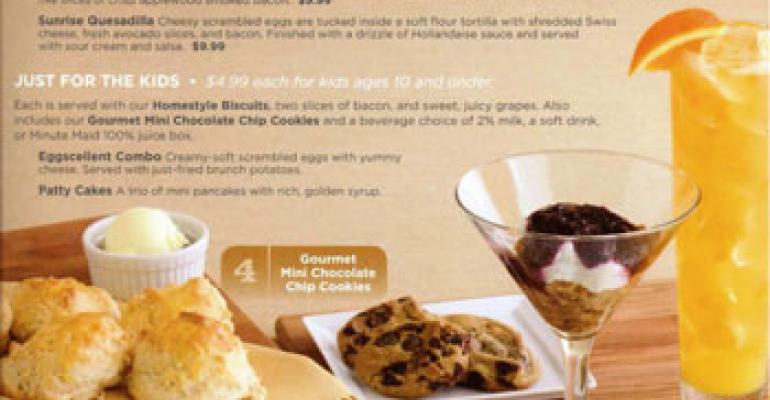 The move into the breakfast daypart by the dinnerhouse chain could provide a jolt to sales at a time when restaurants are struggling to entice consumers to spend more on dining out. Ruby Tuesday had tested the weekend brunch offering at a handful of corporate restaurants earlier this year and expanded that test to about 50 locations this summer after receiving positive guest feedback.

According to research from securities analyst Bob Derrington at Morgan Keegan & Co., the brunch menu includes four courses including made-from-scratch country biscuits, a Berry Good Yogurt Parfait, an entree selection and Gourmet Mini Chocolate Chip Cookies for dessert. There are 10 different entree choices with prices ranging between $9.99 and $13.99, including Mini Steak Benedicts at $11.99, a Mini Benedicts Trio at $13.99, Silver Dollar Short Stacks at $10.99, and three different Sunrise Quesadillas, which are priced from $11.99 to $12.99. Two brunch meals for kids are priced at $4.99 each.

“To borrow a baseball metaphor, while we would not characterize the brunch as a home run-driver of same-store sales growth, we do believe it represents one in a series of initiatives – singles and doubles – [that] management continues to explore to further leverage sales within its system,” Derrington said in his report. “Ultimately, we believe initiatives like these will build on our projection for Ruby Tuesday’s same-store sales to improve through this fiscal year and into next.”

To execute the weekend brunch offering, restaurants would open two hours earlier than normal, at 9 a.m., and serve just brunch until 11 a.m. For one more hour, from 11 a.m. until noon, both the brunch menu and regular menu would be available to guests.

Ruby Tuesday has been offering buy-one, get-one free coupons for both dinner and brunch in markets where the brunch is available.