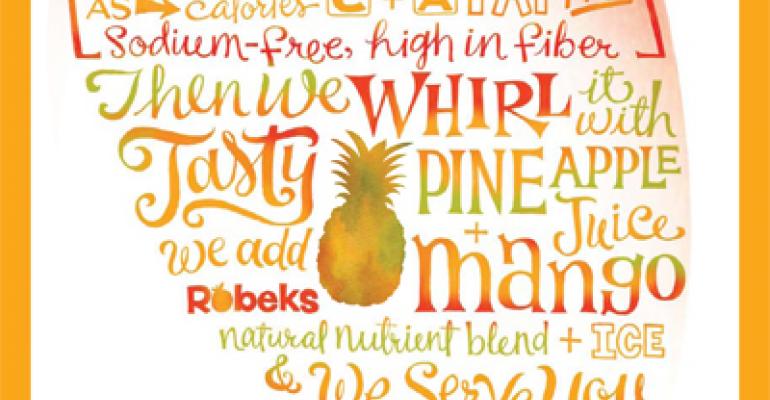 Robeks is touting the healthfulness of its whole-fruit menu items in a new social media campaign as it looks to differentiate itself from McDonald’s and other quick-service chains now offering smoothies.

The Los Angeles-based chain has long positioned itself as a premium smoothie brand with drinks made to order. But in the past few years, the 130-unit, all-franchised chain has been focusing more on marketing new products and a value message, rather than health, said chief executive Steve Davidson.

With menu labeling coming, Robeks is planning a menu overhaul before the November deadline that will purge some “old and tired” items and add new products. Calories and other nutritional information will be posted to better highlight the healthful profiles of Robeks smoothies, said Davidson, who spoke with Nation’s Restaurant News on Tuesday.

Robeks is testing the offer of “co-branded coffee” in some units, he said, though he declined to elaborate. Drive-thru locations also are planned.

With the new marketing push, Davidson said the goal is to educate consumers about the growing number of quick-service players offering smoothies made with processed sugars, powdered milk products and other artificial ingredients.

By contrast, Davidson said, Robeks’ smoothies are made to order from quality, premium ingredients, “not dispensed from a machine.”

“We’re using real fruit, individually quick frozen, and our yogurt is a proprietary blend high in probiotics. We use natural juices with no additional sugar,” he said. “And we have always had, and we’re very proud of, our proprietary supplements. We can design smoothies to order that meet someone’s specific nutritional needs.”

The social media campaign on YouTube, Twitter, Facebook and blogs will invite customers to name Robeks’ hummingbird icon. Customers will also be invited to upload video of themselves “showing off their blending skills.”

Following competitors such as Jamba Juice, which has been aggressively promoting licensed branded retail products such as frozen desserts, Davidson said Robeks is looking into licensing, though he said it was too early to say what products might emerge.

Unlike Jamba Juice, however, Davidson said Robeks is not planning to add oatmeal.

Robeks’ morning customers tend to want smoothies — typically after their workout at the gym — not breakfast, he said. However, the chain is planning to expand its line of “bowls,” such as the Açai Especial Bowl, which features puréed açai fruit blended with banana and blueberries and topped with sliced bananas and granola.

“Our bowls have been quite popular for us,” he said.

Robeks is planning to open its first international unit in Tokyo in July. The plan for overseas expansion was announced last year, but Davidson said the earthquake in Japan set back the unit opening planned by the master franchisee by several months.

Master franchisee Clarence Corp., based in Tokyo, has the goal of opening 500 of the smoothie outlets throughout Asia. Davidson said Robeks is also looking at Brazil, Eastern Europe, Puerto Rico and the Caribbean.

Davidson joined the company as chief executive in September 2008, just as the economy took a nosedive, he said.

“I joke that Robeks was a growth company on the day I was hired, but by the time I started the job it was a turnaround -- all because of the economy,” he said.

Sales for Robeks were down in 2009 and part of 2010, primarily because of the recession, he said.

And though bad weather has taken its toll this year in some regions, Davidson said California stores are “doing well,” after two years of soft sales.