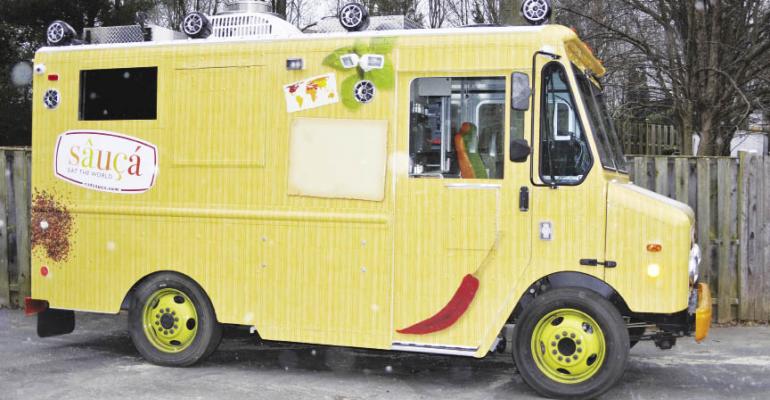 The right equipment, layout help put food trucks on the road to success

Swarms of customers and tons of media exposure for gourmet food trucks in Los Angeles and New York have would-be truckers in many other places eager to try mobile foodservice.

But given the burgeoning segment’s novelty, guidance for creating kitchens on wheels is sparse. Most street food pioneers are traveling a road of trial and error as they outfit their mobile businesses, with some trading tips among themselves and tapping the few consultants familiar with the life of a food truck jockey.

Scott Baitinger, partner in Streetza Pizza, a Milwaukee-based truck selling hand-made gourmet pizza by the slice, is one operator who did his homework. In his “700-degree oven on wheels,” as he put it, pizzas are par-baked in a compact deck oven, held in warming units and topped and finished when needed in about five to six minutes.

“We researched the most-compact, best-performing pizza equipment and experimented a lot with setup to get the most efficient workflow possible,” Baitinger said.

The equipment works well enough to sell between 15,000 and 20,000 pizza slices in one day at a public festival, he said. He has an agreement with a partner to develop 26 Streetza trucks in the Midwest by year’s end.

However, Baitinger admits to an occasional “comedy of errors” in equipment matters as the concept was groomed. For example, the Streetza truck was initially outfitted with all-electric cooking equipment without considering the power source. That required a 15,000-watt generator that in practice was too large for the truck and uncomfortably noisy to boot. With the lesson learned, the Streetza team switched to a mix of electric- and propane-powered equipment, which is run by a much smaller and quieter generator.

“It sounds like we got it right the first time, but nothing is easy,” Assari said. “Initially, our placement of things didn’t make sense operationally.” For example, in practice he learned that the steamer should be next to the sandwich table.

“You can put almost anything that you want on a truck. You are just confined by space,” said Ray Villaman, a veteran restaurateur and co-founder of Mobi Munch, a Los Angeles-based company that operates food trucks in collaboration with chefs and designs and builds rigs for other operators. Mobi Munch’s first collaborative effort is the Ludo Fried Chicken truck in collaboration with celebrity chef Ludo Lefebvre in Los Angeles.

Naturally, choosing fancier equipment, a sturdier chassis or a more powerful generator will run up the tab. While a Mobi Munch truck with basic equipment like a griddle, fryer, steam table and cold table runs an estimated $125,000, Villaman said, a more customized vehicle like the Ludo truck, which includes four high-capacity fryers for Lefebvre’s signature fried chicken, cost $160,000.

Villaman advised truck operators to plan the menu well and use it as a guide for selecting equipment. “And the kitchen should be designed with some flexibility because it is expensive to yank equipment out of trucks if your sales mix changes,” he said.

In contrast to the leased truck, which is equipped like a basic L.A. short-order taco truck, according to director of facilities Peter Barrett, the new, custom-designed vehicle is more conducive to the partners’ modern Mexican-inspired fare. The kitchen includes a 36-inch griddle with underneath oven, two open burners, a deep fryer and a larger sand-wich table.

The refrigerated sand-wich table is particularly handy for storing the ingredients and garnishes used in the cuisine. “Every one of our tacos has two or three chilled ingredients that go on that are different from the next one,” Barrett said.

The scene is quite different in Chicago, still waiting for its first truck-cooked meal, because city ordinances prohibit cooking aboard trucks. However, food truck entrepreneur Matt Maroni is trying to change that.

Maroni is working with members of the Chicago City Council and city health authorities on revised regulations to allow onboard cooking. He is hopeful that the measure will be adopted this summer.

“We have 95 percent support,” Maroni said. “It would do a lot for job creation in this economy.”

Meanwhile, as the wheels of municipal government grind on, he is selling gourmet flatbread sandwiches called “naanwiches” out of a small storefront eatery called Gaztro-Wagon. Ultimately, he intends it to be the home base for a truck concept of the same name.

A former private club chef, Maroni has no illusions about what he is getting into.

“A food truck is cheaper than opening a full-scale restaurant, but it’s just as much work, if not more,” he said.