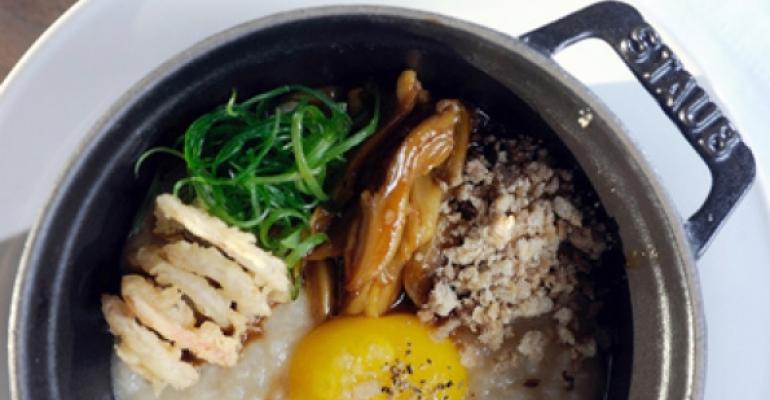 For this $9 appetizer, chef Benjamin Lambert draws inspiration from the congee, or rice porridge, that he ate when he lived in New York City.

He starts with Carolina Gold rice and overcooks it so the grains start to fall apart a little — an idea he got from an unpublished book of Gray Kunz’s recipes from the 1990s, when the legendary chef ran the New York restaurant Lespinasse.

Lambert purées about a quarter of the rice and then adds it back to the rest. Then he finishes the rice with some stock and butter.

He coats duck tongues with salt, bay leaf, thyme and rosemary and lets them cure overnight. The next day he slowly cooks them in duck fat. He also deep-fries duck skin to make cracklin’s.

At service he spoons the porridge into a cast-iron skillet.

When garlic shoots are in season, in the spring, he garnishes the porridge with them. The rest of the year he uses scallions. He also adds crispy-fried shallots.

He warms the duck tongues in duck jus and adds them and the cracklin’s to the porridge, topping it all with a raw egg to be stirred into the dish by the guest.

“People that get it love it,” Lambert said. “But people are really turned off by duck tongue sometimes.”