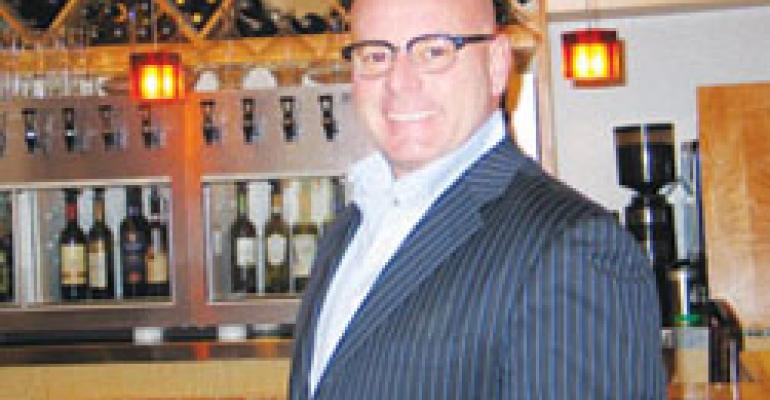 LOS ANGELES All’ Angelo Ristorante opened here in 2007, it was one of the city’s most highly rated—and highly priced—Italian restaurants, offering a menu laden with lobster, caviar, foie gras and Colorado lamb. —When

But after the economy’s nosedive late last year brought much of Los Angeles’ dining scene to a standstill and left owner Stefano Ongaro wondering how he was going to pay the electric bill, he decided it was time for drastic action. —When

In mid-November, Ongaro stripped off the white tablecloths, put up the fine crystal and completely changed his menu. What had been a fine-dining concept averaging $120 per person was reinvented as a trattoria with not one dish priced at more than $20. —When

As restaurants nationwide struggle to draw in diners with lower-price options and discounted specials, some operators instead are opting for complete overhauls as a means to at least bandage their wounds, if not stop the bleeding. —When

“There has been an increase in volume, but not as much as I was hoping,” Ongaro said. “But you can’t offer diamonds and rubies when the people aren’t buying them.” —When

Across the country in New York City, Chris Cannon, the owner of high-end Italian restaurant Alto, also revamped his concept in recent weeks. —When

Previously, the urbane, high-end venue offered an à la carte menu with entrées ranging from $39 to $50. Now, Alto offers only a prix-fixe menu every night. Three courses are $75, with add-on courses $10 each. Alto also dropped its $60 corkage fee, allowing guests to bring in one bottle for free. —When

Ongaro said he wasn’t willing to compromise on the quality of the food at All’ Angelo. So rather than skimping on the few customers willing and able to pay fine-dining prices, Ongaro decided to offer a top-quality but casual menu, one that would appeal to customers on a more regular basis. —When

To offer lower prices, however, Ongaro has been forced to cut his expenses. His staff of 18 was reduced to six, and he has picked up much of the work, not unlike the chef-owners of restaurants in Italy where he grew up. —When

Now Ongaro gets up at 6 a.m. to pick out the fish and produce each morning. He cuts and arranges the flowers for the restaurant. —When

He works the floor at the restaurant every night, though no longer in a coat and tie, to fit with the restaurant’s more-relaxed atmosphere. —When

The menu now features a selection of pizzette alla Griglia, for $8 each. Plates of salumi and cheeses range from $10 to $13. Antipasti, such as braised tripe with grilled garlic crostini or cauliflower timbale with mascarpone and Parmigiano-Reggiano, are $10. —When

Pastas, which are house-made, and risottos are $15. Entrées, such as Mediterranean striped bass, or beef short ribs with soft polenta, are all $20. —When

In addition, All’ Angelo now offers delivery service. Ongaro charges a $4 fee for deliveries under $100 and $12 for those more than $100. —When

Ongaro said he had no other choice. —When

“A desperate situation needs desperate measures,” he said. “If the market goes up, and there’s a need to go back to the platoon in the kitchen, we’ll do that.” —When

At Alto in New York, Cannon said the restaurant kept the same menu, but changed to an all-prixfixe format to make it more affordable. —When

Sales at the restaurant were down about 10 percent to 15 percent, Cannon said, which he feels is not bad, considering how other operators in the city are faring. —When

Like Ongaro, Cannon was not willing to compromise the quality of ingredients on the menu. —When

“A lot of other restaurants have sacrificed quality of ingredients and the integrity of the cuisine to make the experience more affordable, but that wasn’t an option for us,” Cannon said. “Diners still want an incredible dining experience, but, right now, it needs to be at a price that they feel comfortable justifying, whether that’s to an employer, an accountant or themselves. —When

“This was the best solution we came up with, and it seems to be working.” —When

For $75, a guest to Alto might select a wild-mushroom soup with truffled cream and toasted crostino; a risotto with mussels, clams and scallops; and rack of lamb with tomato-eggplant marmellata, capers, olives and ricotta salata. —When

Prior to the change, the same selection of courses would have cost $92, Cannon said. —When

Some dishes, such as the roasted Maine lobster with cranberry-bean ragù and rosemary oil, have a “prix-fixe supplement,” or additional cost, but there is plenty for guests to choose from without incurring additional cost. —When

A benefit of the prix-fixe format has been better controls on food costs, which have dropped about 8 percent, Cannon said. —When

Dropping the corkage fee has not significantly impacted check averages so far, he added. Now guests are able to enjoy two bottles of wine for the price of one. —When

“It’s a way to further enhance their experience,” Cannon said. —When