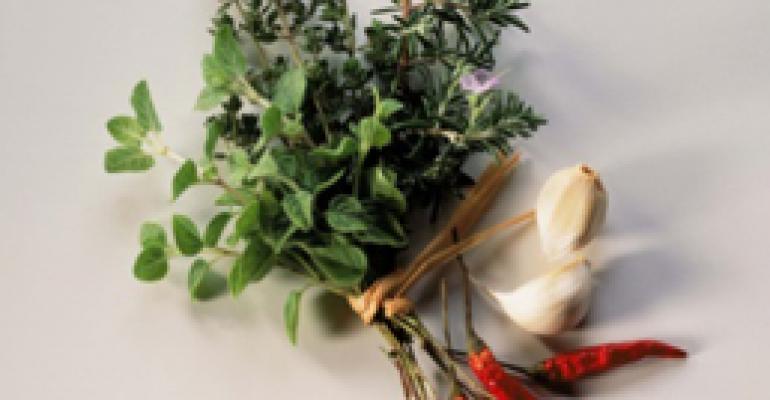 Restaurateurs have made garlic the star of their menus when it comes to flavorings, with the vast majority of restaurants listing the pungent culinary staple on their menus.

But up-and-coming flavors also include sea salt, fennel and cumin, according to new menu research from Datassential.

Garlic handily reached the top spot as the most widely listed flavoring on restaurant menus, according to menu research firm Datassential, which monitors more than 4,800 restaurants across the United States.

It beat out other flavor contenders across all restaurant segments and dayparts, with 74.5 percent penetration on restaurant menus. The next most popular flavoring was basil, which is listed on 39.4 percent of surveyed restaurants.

While pervasive, garlic’s popularity isn’t exactly new. In a five-year growth trend comparison, from 2007 to 2011, garlic saw only an 0.4-percent increase in menu mentions, having penetrated restaurant menus some time ago.

Flavorings that are hot today include sea salt, which posted a 125-percent surge in usage on restaurant menus, followed by fennel, which booked a 53-percent jump in menu listings. Regular salt, cumin, cayenne and thyme each reported increases in usage among restaurant menus, hovering around the 30 percent mark.

“Herb” came in as the third-most listed flavoring on menus. According to Jana Mann, director of menu trends for Datassential, “herb” appears in the data because of its descriptive use on countless menus, including “garlic herb butter” or “fish encrusted with herb-seasoned bread crumbs.” Herb was listed most with menu items such as chicken and fish entrées, as well as non-fried vegetable appetizers, Datassential results show.