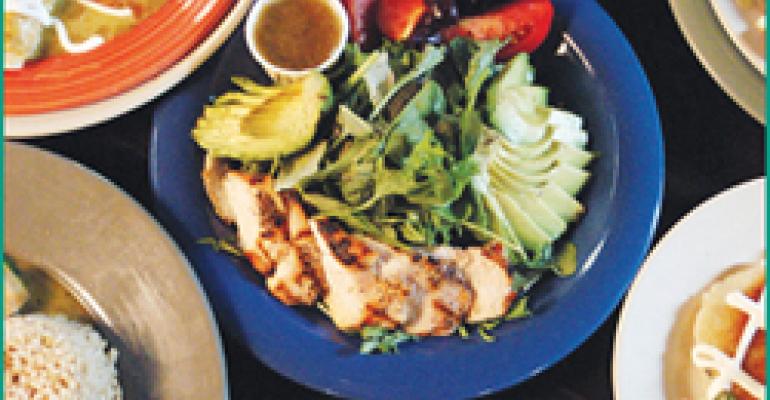 Green is the new black. As organic food continues to come into fashion, all manner of organic foods are available at retailers and popping up on menus nationwide. Still, when it comes to dining out, how do customers know if their meals are authentic Versace or just Chinatown knockoffs?

Because of government regulations, consumers can be confident that the organic products they purchase in specialty grocers are the real deal—pesticide-free, with no additives and cultivated through environmentally friendly means. Restaurants, however, do not need to be certified to claim they use organic ingredients.

Still, some concepts, including recent additions Crust and the Bleeding Heart Bakery in Chicago and the fine-dining Tilth in Seattle, are joining the ranks of restaurants that tout legitimate organic status and are adapting to the sourcing challenges, elevated labor costs and mounds of paperwork that come with it.

Despite the hurdles, chefs and owners agree: Certification is worth the hassle.

“My restaurant opened 28 years ago, and it’s busier now more than ever before,” says Nora Pouillon, chef-owner of Restaurant Nora in Washington, D.C. “The restaurant provides food customers can trust, with no chemical additives, that’s nutritional and wholesome.”

In 1999 Restaurant Nora became the first restaurant to be certified organic.

According to a customer survey at the Ukiah Brewing Co., in Ukiah, Calif., 25 percent of their customers come because of its organic certification, and 50 percent come because they like the idea of eating organic and supporting an organic establishment. The remaining 25 percent dine there because they just plain like the food.

The brewpub has been certified since 2001.

Don Wilson, chef-owner of The Sterling Café in Seattle, says that his restaurant, certified since 2004, has even converted some skeptic diners.

For a restaurant to be certified organic, 95 percent of the ingredients in each menu item must be produced and handled according to national organic standards of soil conservation, protection of air and water, and humane treatment of animals.

The remaining five percent of the restaurant’s products can be so-called “conventional” foods and cleaners. Most restaurants reserve this five percent for wild foods, such as naturally harvested seafood and mushrooms, for which there is currently no certification process. Since those products are gathered from uncontrolled environments, there is currently no way to determine if they’ve been exposed to pesticides or pollutants. All nonorganic ingredients must be clearly labeled on the menu.

Some agencies that certify farms and distributors have extended their scope to restaurants. While both private companies and state departments of agriculture provide certification, both types of agencies must be accredited by the USDA. Since restaurant certification is becoming more popular, one certifying agency, California Certified Organic Farmers, is planning to focus on restaurants in 2008.

The certifying agency also sent an inspector to the site to ensure the bakery follows the guidelines outlined by the USDA’s National Organic Program. For example, organic ingredients cannot commingle with conventional products, including cleaning products. The inspector returns each year, and also will review the bakery’s upcoming satellite location in Chicago’s Roscoe Village neighborhood.

Another certified-organic spot in Chicago, Crust, a wood-burning pizzeria, opened in May.

She also employs meat and fish cutters because organic meats often come in large pieces that need to be cut into portions. Since organic vegetables do not arrive prechopped, she also employs someone whose entire job is to trim and clean vegetables.

“We hand-cut French fries,” Cooperrider says. “We don’t open packages and dump them into the fryer like other places.”

Cooperrider adds that she has learned to adapt to the challenges of offering organic products. For example, when she couldn’t find organic dried chiles for a mole sauce, she contracted a grower to produce and dry Ancho chiles.

Since more restaurants are either becoming certified organic or simply including organic items on their menu, Valentin Garcia says certain ingredients are difficult to find at times. Garcia says it was easier for the bakery to find ingredients before the organic boom. But it’s just a matter of time before growers can catch up, he says.

Maria Hines, chef-owner of Tilth, says it is difficult to find meats, such as duck and local red meats, in quantities large enough to meet the needs of a restaurant, since organic ranches are often small. Tilth has been certified-organic since its opening in September 2006.

Restaurant Nora’s Pouillon adds that there is no organic quail and not enough lamb to supply her needs.

Pouillon says that going organic also means fewer choices. For example, she purchases just one type of organic balsamic vinegar and not many olive oils. Some goods, like chocolate bars, are only sold retail. Still, she says organic products are much easier to find now than when she first became certified eight years ago. Such items as saffron, pickles, capers and olives are now available.

Wholesale organic ingredients can be triple the price of conventional products, says Cooperrider, who pays admittedly steep prices for some cheeses used at the brewpub. Despite higher costs, chefs are finding ways to steer the burden away from the consumer, so they don’t have to pay the premium to eat organic.

Pouillon uses everything from vegetable trimmings to chicken wings and livers to help keep food costs down.

Hines says she steers away from luxury items like lobster and caviar to keep the cost of a meal at her restaurant reasonable—$45-$50 per person.

At the Bleeding Heart Bakery, the price per person for wedding cake is $8-$10, which Valentin Garcia says is the same as many other professional cake makers who are not organic.

“We can’t blame organics for the price difference when comparing apples to oranges,” Valentin Garcia says. “A cake made by a recognized professional using all organic ingredients and still costing as much or less than any other cake made by the same type of individual is what sets Bleeding Heart apart.”