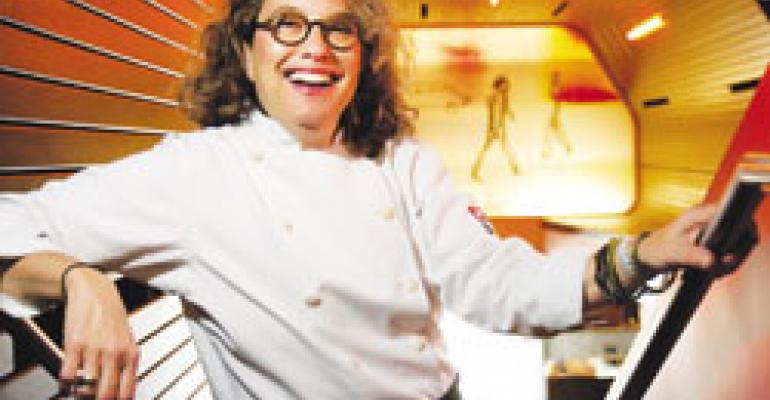 Most students who attend The Culinary Institute of America and other professional culinary programs want to be chefs. But over the past five years or so, a growing number of students have a new career goal in mind: They want to cook on television.

“For years I have preached to students that a CIA degree will help them become a rock-solid cook, but you’re not a chef right away until you earn your chops in the kitchen,” said Adam Busby, director of education for the CIA at Greystone in St. Helena, Calif. “Now, more than just a few students don’t necessarily want to walk down the path of working in a restaurant. They want to cut their chops on a TV set.”

And Busby doesn’t discourage them. Americans may be cutting back on dining out, but their insatiable appetite for watching chefs cook on television has spawned a growing number of programs that not only encourage new aspirations for those in the culinary arts, but also give more operators bigger platforms to push both their businesses and their personal agendas.

Some restaurateurs have built powerful brands around their TV appearances, allowing them to stray beyond the food realm. Emeril Lagasse in April debuted his own weekly variety show on the Ion network. Other chefs are using TV as a medium to change the world, such as British chef Jamie Oliver’s “Food Revolution” on ABC, which aims to convince Americans to give up “junk” for more healthful, fresh foods. It’s not just chefs in the TV spotlight, but restaurants, too. Music channel VH1 reportedly is developing a pilot reality show centered on the Hollywood restaurant Beso, owned by actress Eva Longoria-Parker.

The proliferation of food-related shows also is increasingly blurring the line between real-life restaurant operations and what people see on TV.

The Food Network is extending its brand into foodservice through a new partnership with Delaware North Cos. that will bring dishes from the network’s website and magazine to sports stadiums across the country.

Another show in development at NBC is intended to give birth to a new restaurant chain. With the working title “America’s Next Great Restaurant,” prolific celebrity chef Bobby Flay and a team of investors will select a chain restaurant concept idea to fund in a national competition. The goal is to get the restaurants open in three markets by the show’s finale, while the buzz is still strong.

Over the past few years, food-related TV programs—from “Top Chef” to new docu-soap “The Private Chefs of Beverly Hills”—have multiplied so quickly, even the most dedicated foodies have trouble keeping up. And more are in the pipeline.

On May 31, the owners of the Food Network are launching the new Cooking Channel, a second network offering 24 hours of new programming aimed at foodies who want to kick it up a notch—and, yes, Emeril Lagasse will have a new show there, too.

“The door has opened up for TV over and above the Food Network; it’s available for a lot more people [in the industry] to do TV than ever before,” said Los Angelesarea restaurateur and chef Susan Feniger, who is currently on Bravo’s “Top Chef Masters” series.

The advantages of appearing on TV are demonstrated by countless alums of “Top Chef,” “Iron Chef” and “The Next Food Network Star” that have gone on to high-profile openings of their own restaurants.

Tyler Florence, a Food Network TV chef for 15 years, is becoming an owner-operator for the first time, opening three restaurants in Northern California this year, including one that will take over the location of the storied San Francisco restaurant Rubicon.

Feniger notes that TV success does not necessarily translate to restaurant success, however.

“You can raise the money to open a restaurant after being on TV, but you may not be qualified to do it,” she said.

At the same time, the growth in televised cooking is forcing many established chefs to rethink their “media presence.”

Feniger is co-owner with Mary Sue Milliken of the 25-year-old Border Grill concept, with locations in Santa Monica, Calif., and Las Vegas, as well as Ciudad in Los Angeles. Feniger also owns Street, which opened in LA last year.

Feniger and Milliken launched their first TV series, “Too Hot Tamales,” in 1995 during the early days of the Food Network.

Feniger’s TV appearances over the years have ranged from “Iron Chef” to “Sabrina the Teenage Witch,” but she said she never fully capitalized on the marketing potential of those appearances.

Now, Feniger said, she is working hard to tap into the “Top Chef Masters” buzz, hosting premier parties and events tied to stages in the competition. Some of the dishes she cooked on TV are available in her restaurants, and every guest check includes a flyer encouraging guests to watch Feniger on the show.

“In this economy, you have to take every advantage, and we’ve learned that there are tools to make it bigger than the one show,” Feniger said.

Similarly, the Food Network is aiming to make its culinary brand bigger than the one network.

Richard Dobransky, Delaware North’s vice president of food and beverage, said Cleveland’s Progressive Field will be the first to offer the full range of menu items at various suite and club-level outlets. And when football season starts, the Meadowlands stadium in New Jersey will take it a step further with a Food Network concession stand. The partnership is expected to grow to include other DNC venues, such as airports.

Sergei Kuharsky, general manager of new business enterprises for a division of Scripps Networks Interactive, parent to the Food Network, said in a nod to fan interest the company’s Fine Living Network will be rebranded as the Cooking Channel, a complementary sister brand to Food Network. The shows will feature a mix of instructional and entertainment-focused storytelling intended to deepen the “symbiotic” relationship between restaurants and TV, said Michael Smith, the Cooking Channel’s general manager.

To Jane Lipsitz, executive producer of “America’s Next Great Restaurant,” the TV and restaurant worlds have not yet fully captured the power of that symbiotic relationship.

Her production company, Magical Elves, is behind the “Top Chef” franchise, which will soon include “Top Chef Desserts.” Lipsitz is also developing a new food-travel show for Bravo called “Around the World in 80 Plates.”

“America’s Next Great Restaurant” will combine the excitement of a competition with the drama of opening a quick-service or fast-casual chain. Open casting calls were held in March and April, and Lipsitz said they are sifting through hundreds of submissions.

“People haven’t really yet harnessed the power of the marketing of reality TV, maybe with the exception of shows like ‘American Idol,’” Lipsitz said. “We were looking to do something really big. This is potentially one of the biggest prizes in reality show history.”

Starting May 31 on the Cooking Channel:

“Rachael Ray’s Week in a Day”

Previous attempts to capture the drama of opening a restaurant, such as the NBC show “The Restaurant” with Rocco DiSpirito and Jeffrey Chodorow, have not had happy endings. DiSpirito’s restaurant, Rocco’s, closed in 2004 after a bitter legal battle—although it all made for great TV.—[email protected]