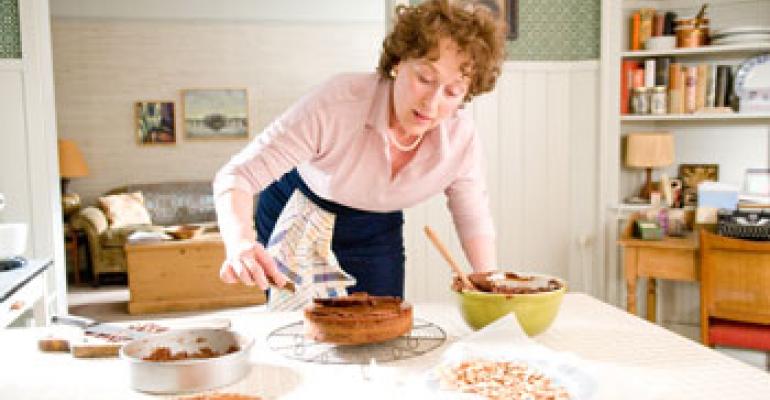 The upcoming release of the film "Julie & Julia" has inspired many restaurants across the country to pay homage to culinary legend Julia Child with a variety of specials and tasting menus. Museums and cinemas are also planning exhibits and events to tie in to the movie, which hits theaters on Friday.

Check out some of the special events and menus below. If you’re offering a “Julie & Julia” inspired menu that you would like to share, send details to Pamela Parseghian at: [email protected].

-John Sheely, chef-owner of Mockingbird Bistro Wine Bar in Houston, Texas, is offering special Julia Child Tasting Menu through the month of August. The four-course menu will sell for $69 or $89 with wine pairings. Sheely will change the menu offerings weekly to feature a wide variety of Julia Child’s recipes, such as vichyssoise, coquilles St. Jacques and tarte Normande aux pommes (hot custard apple tart). “Julia Child has always been an inspiration for me,” Sheely said. “Her 'Mastering the Art of French Cooking' was the very first cookbook that I ever owned.”

-Comme Ca restaurant in West Hollywood, Calif., will feature an “Ode to Julia” tasting menu for dinner on Aug. 14 and 15 with gravlax, cucumber and dill canapes, vichyssoise, crab stuffed artichoke, lobster Thermidor and beef Wellington. The five-course menu will be priced at $65.

-Alamo Drafthouse Cinema in Austin, Texas, is offering a five-course menu with five glasses of wine for $75, which also includes the movie ticket. The feast features dishes from the film, such as sole meuniere, pate-stuffed duck en croute and raspberry-cream-filled crepes. Alamo’s first viewing and meal is on Aug. 10, and tickets sold out in less than 20 minutes. After the second screening-and-dining event scheduled for the next day sold out within two days, management decided to add a third viewing and feast for Aug. 12. The theater also offered a Harry Potter feast last month.

-Chef Mavro restaurant in Honolulu will offer a three-course tasting menu highlighting boeuf Bourguignon every Friday and Saturday night in August. His menu will be $59. Click here to view a video clip of Chef Mavro showing off his boeuf Bourguignon.

-Four restaurants in Louisville, Ky., are offering special dinner menus inspired by the movie. Limestone Restaurant is offering a reception and dinner for $75 on Friday, the day the movie is released. The Oakroom also will host a reception and dinner that night for $75 or $85 with a movie ticket. Cafe Metro will serve a special menu for $65 on Aug. 13, and Lilly's Bistro will offer "All Julia É a la carte" menus at lunch and dinner on Aug. 15. For more information, read the full story by The Courier-Journal by clicking here.

-Le Cordon Bleu Schools North America is hosting a virtual cooking class on Thursday in honor of the film. Stephanie Izard, winner of the fourth season of "Top Chef," will demonstrate how to prepare two dishes inspired by the film: boeuf Bourguignon and chocolate chiffon pie. The cooking demonstration will be streamed online beginning at 2 p.m. Eastern at http://www.chefs.edu/JulieandJulia.

-The International Spy Museum and Stir Food Group will hold a cocktail reception Aug. 20 to celebrate the life of Julia Child, who before her cooking days worked for the Office of Strategic Services, a precursor to the CIA. The reception, which includes Julia Child-inspired fare and a cooking demonstration, will be at held at Zola Wine & Kitchen in Washington, D.C. Tickets cost $55 and can be purchased by calling 202-639-9463.