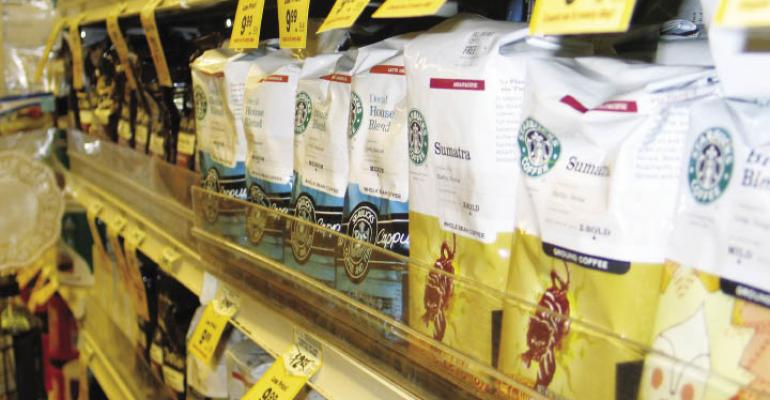 As Starbucks and Kraft Foods Inc.’s bitter — and likely expensive — divorce as licensing partners plays out in the court room, industry watchers see the drama as a sign that the stakes are getting ever higher for restaurant companies looking to license their brands.

Starbucks isn’t the only restaurant chain to change partners in recent months. H.J. Heinz Co. plans to part ways with Boston Market for the distribution of frozen dinners available in grocery stores next year, and the Golden, Colo.-based restaurant chain has found a lesser-known — but perhaps more devoted — partner.

And smoothie-chain operator Jamba Juice is accumulating multiple licensing partners as it attempts to build a consumer-product platform with billion-dollar potential.

The activity of late reveals how complex and competitive the landscape has become for the growing number of restaurant companies seeking to establish a brand presence in grocery aisles.

“Restaurant companies say, ‘I want to get a product in grocery stores. How hard can it be?’ The truth is: very,” said Bill Cross, vice president of restaurant and food brand licensing for Broad Street Licensing Group, a Montclair, N.J.-based broker.

To market, to market

For years, restaurant companies have looked for opportunities to bring branded products to other retail channels. Recent examples range from P.F. Chang’s China Bistro, which in 2010 introduced a line of frozen meals that were expected to surpass $100 million in sales their first year, to IHOP with its introduction this summer of Rooty Tooty Fresh N’ Fruity-flavored lip gloss, the first in a new push to develop licensing as an ancillary revenue stream.

Starbucks, however, plans to take its retail efforts to a new level.

Over the past 12 years, Starbucks’ licensing agreement with Kraft Foods has grown into a $500 million business, which has placed Starbucks Coffee and Seattle’s Best Coffee packaged products in grocery and retail stores across the country. Kraft also distributes Starbucks’ Tazo Tea products in retail stores.

Last month, however, Starbucks said it plans to end its partnership with Kraft next year, saying the Northfield, Ill.-based license partner has not met its responsibilities for actively protecting and promoting the coffee brands in stores.

Starbucks also said it intends to take its bagged coffee and tea distribution in house, with the help of Jacksonville, Fla.-based Acosta Sales & Marketing as a broker. Acosta helped Starbucks launch its new VIA Ready Brew instant coffee line, which reached $135 million in sales in its first year.

The move is part of a larger plan by Starbucks to build its consumer products group, or CPG, business as a pillar for future growth that crosses multiple channels and reaches consumers in ways the brand never did before.

Kraft, however, has taken issue with the way Starbucks has handled the split. The global snack-maker filed both arbitration proceedings and a court injunction to force the coffeehouse chain to abide by what it sees as terms of the contract.

Kraft officials have argued that the contract is in effect indefinitely and that a split would require compensation for the fair market value of the business plus a 35-percent premium, which by some estimates could top $1 billion.

Regardless of how the dispute plays out, attorneys say it reveals the importance of getting the language right in the original agreement.

“I get the impression that the Kraft/Starbucks agreement is more subjective in nature,” said Martin Hyman, litigation partner with Golenbock Eiseman Assor Bell & Peskoe LLP.

To force Starbucks to continue the agreement, Hyman said Kraft would have to argue that the split would cause irreparable harm to the global snack-maker, which generates annual revenues of $48 billion. But Kraft has already suggested monetary damages as a cure.

“It’ll be a money dispute, pure and simple,” he said.

A court battle, however, could slow Starbucks’ plans.

In building its CPG infrastructure, Starbucks has said an acquisition is possible, fueling speculation that the coffeehouse giant could target a company with a long-established track record in packaged coffee and tea retail sales, such as Emeryville, Calif.-based Peet’s Coffee & Tea.

Cross of Broad Street noted that Starbucks is able to bring the packaged coffee business in house in part because Kraft has done much of the hard work, paying expensive slotting fees to get the bagged coffee on grocery shelves, for example.

“Kraft has built the distribution footprint, and now Acosta will take that and run with it,” said Cross.

It remains unclear, however, whether Starbucks will have the muscle of a powerful consumer goods house like Kraft to maintain the coffee brand’s presence on store shelves.

“Starbucks figures everything they do is gold and they can do a better job,” said Cross. “But it’s not what you can make; it’s what you can sell.”

Boston Market will also be stepping away from the comfort of a powerful consumer goods ally when it splits with Heinz next year.

Greg Uhing, the restaurant chain’s chief financial officer, said Heinz decided to end the 10-year relationship after a strategic review of its brand portfolio — though he added that the decision to split was mutual.

In November, Boston Market announced a shift to Vernon, Calif.-based Overhill Farms — a relative unknown — which will manufacture, distribute and market the chain’s branded frozen meals starting in July 2011. The agreement has a five-year term, with two additional five-year renewal options.

With Heinz, Uhing said, Boston Market was just another part of a $10 billion portfolio. Overhill, however, is more likely to give Boston Market its full attention.

With Overhill, however, Uhing said the number of products would be cut in half, targeting better penetration with a more condensed line.

“You need to differentiate your brand,” he said. “There’s pressure to limit your [products] and make each item high velocity for retailers.”

For Smucker, Dunkin’ Donuts-brand coffees have been a top seller.

In its most recent quarter ended Oct. 31, Smucker reported that the Dunkin’ Donuts line of coffees saw double-digit growth, and officials reportedly describe the line, which has reached $250 million in retail sales, as the fastest-growing brand in the Smucker portfolio.

Officials with Canton, Mass.-based franchisor Dunkin’ Brands Inc. said introduction of the bagged coffee in grocery stores has not significantly impacted the sale of the retail coffee in Dunkin’ Donuts stores, which accounts for roughly 2 percent of revenues systemwide.

However, Jim Coen, president of the DD Independent Franchise Owners Inc., a group representing about 2,500 stores, said franchisees are concerned about lack of consistency between the coffee produced by Smucker and the bagged coffee available in Dunkin’ stores, which comes from other sources.

When coupons are made available for the grocery version, Coen said, they generally are not applicable to the coffee in Dunkin’ stores, but consumers bring them in anyway. Franchisees often feel pressured to take the coupons, even though they are not reimbursed for them as supermarkets are, said Coen.

Earlier this year, Smucker said it would raise coffee prices by 9 percent because of higher coffee commodity costs. The announcement didn’t apply to the coffee in Dunkin’ stores, but consumers still expressed discontent, he said.

“It’s just that there’s confusion and frustration,” he said. “Building a brand is based on consistency.”

Karen Raskopf, senior vice president for communications at Dunkin’ Brands, said the company has been working to help eliminate any confusion over coupons and pricing.

The partnership with Smucker has been tremendously beneficial in building brand loyalty and awareness, she said, and the Dunkin’ Donuts-brand “original blend” and decaf versions have become top sellers within the premium coffee segment.

Overall, the move into grocery stores has transformed Dunkin’ Donuts from being a donut-and-coffee retailer focused on the Northeast into a “national leading coffee brand,” Raskopf said. “And that’s good for franchisees.”

Jamba Juice also sees licensing as an opportunity to transform itself from a West Coast-focused smoothie chain to a nationally recognized health-oriented lifestyle brand.

Emeryville, Calif.-based Jamba Inc., parent of the 742-unit smoothie chain, has been steadily building its platform of licensed products — from a home smoothie kit to novelty frozen desserts.

Restaurant analyst Conrad Lyon of B. Riley in Los Angeles estimated that the Jamba licensing platform would generate between $3 million to $4 million in 2011.

A new line of fruit-based energy drinks is scheduled to debut early next year in a licensing partnership with Nestlé USA. The energy drinks are the ninth licensing agreement for Jamba, which also recently announced plans for fruit-flavored coconut water drinks, “functional wellness” shots and fruit cup products.

During the company’s Oct. 5-ended quarter, Jamba chief executive James White said the company is aiming for $1 billion in retail sales across its consumer product platform. At wholesale, the basis for royalties, that translates to about $500 million, he said, and royalty rates will range between 4 percent and 7 percent.

“Over time, this will be an attractive flow of revenue,” White said.

Observers say the move is not surprising, given that White is a former Safeway Inc. executive who understands the retail world.

So far, Lyon noted, Jamba has kept the costs associated with licensing outside the company, and the licensing push is seen as positive.

Still, there are risks, said Lyon. Many companies say it can be a challenge to develop a quality grocery product that reflects positively on the restaurant brand.

After debuting a ready-to-drink beverage with Nestlé in 2008, Jamba suspended the product a few months later, citing manufacturing problems.

In addition, restaurant brands expanding their licensed product line also face the risk of brand dilution and ubiquity — especially at a time when so many restaurant brand products are in retail stores.

As Lyon put it, “When I see all those restaurant brands in the frozen-food section, sometimes I wonder: Are we tapping out?”