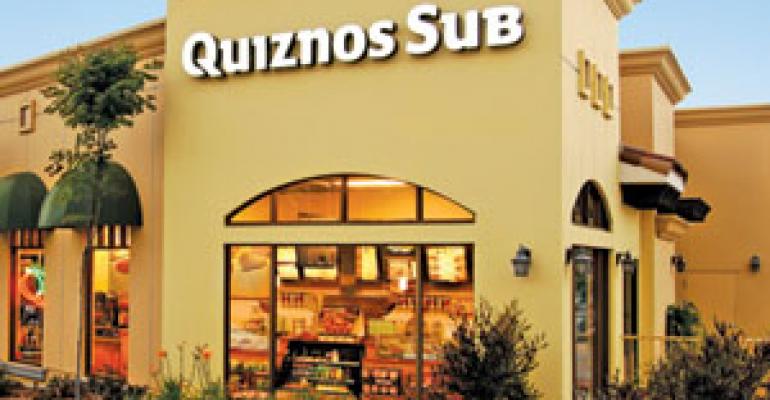 Quiznos’ new spots tone down humor in favor of food focus, tell viewers to love what they eat

Return for a moment to three memorable Quiznos TV spots of yesteryear:

A man unwraps a Quiznos sandwich while his dog watches him. When the man turns away for a second, the dog snatches the sandwich and scampers off. The man chases the dog, wrestles the sandwich from its mouth, scoops together the ingredients that fell out of the dog’s mouth and reassembles the sandwich. Then he eats it.

A businesswoman strolls along a street and spies a Quiznos sandwich wrapper in a trash can. To the horror of her male companion, she hovers over the trash can and licks the wrapper clean.

Two guys sit outside on a bench eating subs. One has a toasted sub from Quiznos, the other has a plain sub from somewhere else, apparently because he’s never heard of toasted subs. “What, were you raised by wolves?” the guy with the Quiznos sandwich asks. The camera cuts to a mama wolf suckling her young, and there is the plain-sub guy, suckling away.

The common thread to these three spots is that Cliff Freeman and Partners of New York created them. They’re typical of the agency’s creativity and ran from 2000 to 2003.

Then Cliff Freeman lost the Quiznos account. Last June, it won the account back. Its new work for Denver-based Quiznos, which has more than 5,000 units, is nowhere near as outrageous as those earlier spots. The humor is far more subdued.

A spot last fall for the chain’s Flatbread Sammies, a small sandwich priced at $2, opened on two women sitting on a park bench. One woman is plain-looking, the other is hotter than blazes. The hot one eyes the other woman’s Sammie, and we hear her thoughts as a voice-over: “She’s getting so much joy out of that little sandwich. That should be me.” She tosses her hair, pouts, and then she says haughtily to the other woman, “I hate you.”

Now Quiznos is promoting its new Prime Rib Ranchero sandwich in a spot where the humor is so subdued it’s just about nonexistent. The spot opens with a title card and the words “The Ranchero” on one line and “No share-o” below it. The voice-over is by actor Michael Clarke Duncan, best known for his role in “The Green Mile.” He describes the ingredients—prime rib, fire-roasted poblano peppers, pepper-Jack cheese, chipotle mayo—and says your friends will want some of your sandwich, “but this Ranchero is all yours-o, not theirs-o.”

OK, so maybe the spot wasn’t supposed to be funny. It is strongly food-focused, however, and the food shots are well done.

Quiznos could use some strong food-driven ads now. Food was pushed into the background during the “Baby Bob” campaign, which aired for more than a year starting in January 2005.

In a way, the Ranchero spot is even more food-focused than Quiznos’ 2006 campaign, which compared the chain’s subs with Subway’s sandwiches and boasted of Quiznos’ product superiority. Subway sued Quiznos over that campaign, contending that consumer-generated ads that were part of the campaign disparaged Subway. The suit is still in court.

Quiznos uses a new tag, “Love what you eat,” in its current spots, and says that coming ads will use “dry humor” and Duncan’s rich voice to give an edge to its food-driven strategy.

Dry humor is as good as any, and Cliff Freeman can supply Quiznos with any type of humor it desires. What Quiznos apparently has learned from past campaigns is that a so-called food-focused ad loses its focus if the viewer is focusing on a wrestling match between a dog and a man and not the sandwich they’re wrestling for.