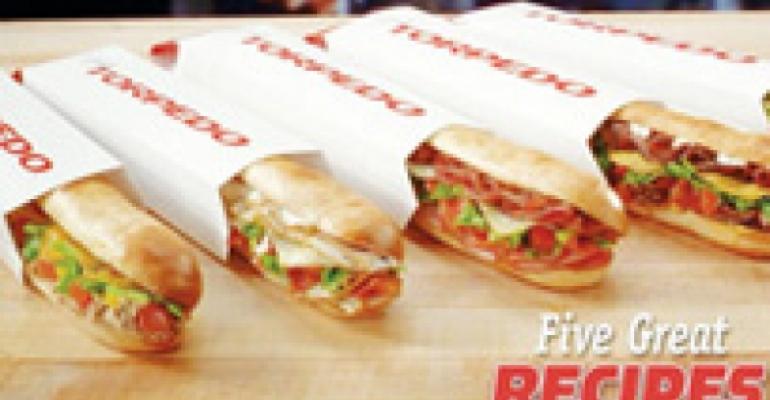 DENVER —Watch your back, Jared.

The longtime pitchman for sandwich segment leader Subway has some new competition: the talking toaster starring in ads for the Toasty Torpedo, the new $4 sandwich from Denver-based Quiznos Sub. —Watch your back, Jared.

Marketing experts say the commercials have broken through with audiences at a crucial time for the sandwich segment, when Quiznos and Domino’s Pizza have entered the fray with new sandwich products at or under the $5 price point that’s been so successful for Subway. —Watch your back, Jared.

The humorous Quiznos spots use the toaster’s deep baritone to announce not only the $4 price point, which undercuts Subway’s $5 footlong, but also to reinforce its traditional point of differentiation. —Watch your back, Jared.

“At Quiznos, it’s all about the toasting,” said Trey Hall, chief marketing officer for the more than 4,500-unit chain. “So who better than the toaster itself [to be a spokesman]?” —Watch your back, Jared.

The $4 Toasty Torpedo, launched March 23, and the accompanying ads have been a boon to Quiznos’ value perception, according to research firm BrandIndex. Quiznos’ value score measured by BrandIndex went from 12.1 for all adults March 2 to an 18.7 value March 26. Among survey respondents aged 18 to 34, Quiznos’ value score hit 20.4 on March 25 and reached a high of 27.4 on April 8. —Watch your back, Jared.

While Hall admitted that the 18-to-34-year-old demographic was an important target, he said the toaster spots were meant to reach a broader audience. —Watch your back, Jared.

For its part, Milford, Conn.-based Subway, with more than 30,700 units, plans to stay the course with its commercials that use the $5 footlong jingle, even as competitors introduce similarly priced sandwiches, said Mack Bridenbaker, spokesman for the Subway Franchisee Advertising Fund Trust. —Watch your back, Jared.

“Well, imitation is the sincerest form of flattery,” Bridenbaker said. “The $5 footlong has been a great success for us, and others can see that. Moving forward, it’s no longer a promotion, it’s a permanent menu item. The competition is going to do what they need to do, but we’re going to continue to promote our own message and not get caught in the back and forth.” —Watch your back, Jared.

Quiznos’ ads take a more irreverent approach, even though the $4 price point is a serious value proposition, Hall said, because the chain has always struck that kind of tone in its TV spots to drive recall. —Watch your back, Jared.

“You always have to break the ice so that you can move,” Hall said, “and the spots are certainly breakthrough. They create a lot of talk. The important thing is the message recall, which is above industry norms based on our research.” —Watch your back, Jared.

Dan Dahlen, executive vice president of restaurants for Nielsen IAG, which tracks audience preferences for commercials, said humorous TV spots always have been important to Quiznos. —Watch your back, Jared.

“Humor has been an integral part of Quiznos’ history,” Dahlen said. “Once a brand finds success with humor in their advertising, it’s difficult to walk away from that. Even though the message [of value] is serious, I think their belief creatively is that it won’t be as well liked if [Quiznos didn’t] surround the message with humor.” —Watch your back, Jared.

Nielsen’s research indicates that both Subway’s and Quiznos’ spots for their value-priced sandwiches are highly recalled and well liked, Dahlen said, so “it’s difficult to declare a winner.” He said Subway’s ads with the jingle are recalled more than ads without the song. —Watch your back, Jared.

“The music is the key piece of continuity for Subway’s ads,” Dahlen said, “but when you look at the commercials visually, there’s less Subway branding, therefore the brand recall is lower.” —Watch your back, Jared.

Dahlen adds that the Quiznos ads have achieved a balance of hinting slightly at sexual humor—the deep-voiced toaster, after all, is all alone with an innocent-looking, impressionable Quiznos employee—without going too far. —Watch your back, Jared.

“Any time a brand pushes the envelope and tries to create a little tension without going over the line, it can be really powerful in terms of being recalled and embraced by the target audience,” he said. “It’s a fine line, though.… You have to be a brand that’s willing to withstand the initial surge of angry call-ins and e-mails and franchisees saying, ‘Get this off the air.’” —Watch your back, Jared.

Sure enough, parents and the Campaign for a Commercial-Free Childhood are protesting a new commercial for Burger King that features female dancers with square butts and a remixed version of Sir Mix-A-Lot’s “Baby Got Back.” But Hall thinks Quiznos’ new spots are safe from the backlash associated with more booty-focused spots from Burger King or Carl’s Jr. —Watch your back, Jared.

“You always want to be mindful of those things,” Hall said, “but the most important thing to remember is there is no such thing as a talking toaster. So if a toaster were to speak, would it be a boy toaster or a girl toaster? We chose a boy toaster. It’s a parody. It’s not real, but what it does do is present what we do best in a fun, whimsical way.” —Watch your back, Jared.