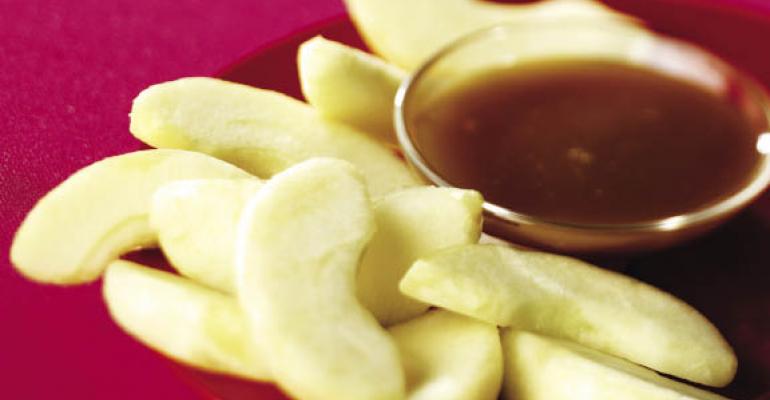 America has a growing case of the munchies, and quick-service operators are looking to milk it by focusing on the hours between traditional meals as the means to build traffic.

Not only are Americans snacking between meals more than ever before, but — in a boon to fast feeders — their definition of “snack” has broadened to include a range of treats, including sandwiches, burgers, chicken strips and drinks, according to researchers.

For quick-service operators, the result has been a blurring of the lines between dayparts, offering an opportunity to grow sales throughout the day and steal market share from convenience stores, which are still the No. 1 snack source for most consumers.

“Restaurants are looking to maximize revenues on overheads that are not going away,” said Darren Tristano, executive vice president of market research firm Technomic Inc. “It’s about filling those nonpeak needs. The goal is to get more traffic in without cannibalizing peak dayparts.”

Snacking as a dining occasion is “one of the few bright spots in the industry” in these recessionary times, said Bonnie Riggs, restaurant analyst for Port Washington, N.Y.-based research firm The NPD Group.

Before the recession hit, both breakfast and snack business were showing signs of real growth, Riggs said. As consumers held tighter to their wallets over the past two years, both categories slowed down in sales, but snacks held up better.

After several years of growth, the number of afternoon snack servings in quick-service restaurants turned negative for the 12 months ended in March, dropping 1 percent, according to NPD. However, for the same period, breakfast servings dropped 2 percent and lunch declined 3 percent.

McDonald’s pioneered the sandwich as a snack in 2006 with the introduction of its line of Snack Wraps, variations of its other sandwiches wrapped in a flour tortilla.

The category includes three varieties of chicken Snack Wraps — honey-mustard, ranch and chipotle — made with either grilled or fried chicken for a recommended $1.49. A Mac Snack Wrap offers a version of the chain’s signature Big Mac in a tortilla.

This year the 32,000-unit burger giant is rolling out the new Angus Snack Wrap, featuring a half patty of the premium Angus Third Pounder in a tortilla in three styles: Deluxe, which includes bacon, lettuce, tomato and other toppings; mushroom and Swiss cheese; and bacon and cheddar. The recommended price is $1.99, about half of the nearly $4 recommended for the Angus burger.

With the national rollout in August, it wasn’t clear at press time whether the Angus snack wraps would replace any existing versions.

Danya Proud, a spokeswoman for McDonald’s USA, said consumers tend to order two Snack Wraps to make a meal at lunch or dinner, where one might be ordered in between meals throughout the day, starting at 10:30 a.m., when they’re available on the menu.

“Over the past several years, the way people eat out has really evolved,” Proud said. “Gone are the traditional days of breakfast, lunch and dinner. The snack category continues to be a growth opportunity.”

Snack Wraps aren’t the only items McDonald’s customers are noshing on between meals.

Proud said the Apple Dippers, fresh apple slices with caramel dipping sauce, were initially introduced as part of a Happy Meal but have become a popular à la carte item. Also popular is the chain’s fruit-and-yogurt parfait. Both are sold for a recommended $1.

According to Technomic’s 2010 Snacking Occasion Consumer Trend Report, released in March, 76 percent of consumers said their snacking habits changed over the past two years.

Most snacks, or 83 percent, are bought at retail locations, such as convenience or grocery stores, according to Technomic, and 74 percent of respondents said they consume their snacks at home, mostly while watching television.

However, younger consumers, aged 18 to 24, are more likely to snack outside the home, according to the survey. And more than half of all respondents, or 55 percent, said they buy snacks at least occasionally from quick-service hamburger concepts.

Sixty-two percent of consumers said they want convenience when they snack, while 59 percent said they wanted portability, according to the report. Meanwhile, 48 percent of respondents said price is very important, and cited $3 or less as the ideal price point for snacks.

Typically smaller portioned and lower in price, snack items tend to require a smaller investment in the product.

On the menu, they can serve as an individual value-priced item, they can be bundled with other products to create a meal, or they can be used as an add-on to build check averages, he noted.

“It gives flexibility,” Tristano said. “Having price points that allow consumers to trade down or up can be a significant factor in building consumer loyalty.”

San Diego-based Jack in the Box in April launched a new “Pick 3 for $3” limited-time offer allowing guests to select among eight options, including several sandwiches as well as selections from the chain’s “snacks and sides” menu, such as onion rings, egg rolls, small fries or an order of five mini churros.

The move was part of a rebranding effort for the Atlanta-based chain, owned by AFC Enterprises Inc. Under the newly created “Louisiana Travelers” section of the menu, the chain included such upgraded favorites as chicken nuggets and tenders, as well as new items such as the Loaded Chicken Wrap, a chicken tender with red beans and rice wrapped in a cheddar tortilla — what Lynch calls a “Louisiana burrito” — priced at a recommended $1.49.

“Anecdotally, when we introduced this category we saw afternoon traffic that we hadn’t seen before,” Lynch said.

Many operators point to around 2 p.m. as the magic snacking hour.

Over the past five years, quick-service operators such as Wendy’s, Taco Bell and McDonald’s have successfully stretched the day to include late-night post-dinner sales, but Tristano said the late-night period doesn’t appear to be gaining traction.

“The bigger opportunity is late afternoon, and that’s where we’re seeing a lot of promotions,” he said.

In that vein, nonalcoholic “Happy Hour” promotions are growing in number. Such offers lure customers with discounted beverages in the hope that food sales will ensue.

Steak ‘n Shake, for example, is aiming to boost both afternoon and late-night traffic with its Happy Hour, offering drinks and shakes at half price from both 2 p.m. to 4 p.m. and 2 a.m. to 4 a.m.

During Sonic’s Happy Hour, drinks and slushes are available for half price between 2 p.m. and 4 p.m. But Paul Macaluso, Sonic’s vice president of daypart marketing, said the program, which launched in 2007, has been so successful the company is now looking at ways to expand it.

The introduction of a value menu has helped, giving customers an opportunity to easily add on a bite to eat with their drink, Macaluso said. He noted that about half of guests who come for Happy Hour also purchase food or ice cream.

This summer Sonic also has upgraded its Frozen Favorites line with the introduction of Real Ice Cream, a higher-in-butterfat product that now meets the U.S. Food and Drug Administration’s definition of “ice cream.” The soft-serve product also is used for the chain’s shakes, sundaes, floats, Chillers and cream slushes — all of which draw between-meal traffic.

Also appealing to the snack crowd, Sonic in May launched a new Snack Trio option, which includes tater tots, mozzarella sticks and onion rings for prices ranging from $1.99 to $2.99.

In the world of snacking, however, one significant competitor for quick-service restaurant operators is the convenience store, where consumers can get a cup of coffee or hot dog as well as packaged snacks.

“We certainly see C-stores as competitors,” Sonic’s Macaluso said. “C-stores do a tremendous business in the mornings and afternoons, and we see the potential to steal some of that market share.”

Operators like Au Bon Pain, Dunkin’ Donuts and Einstein Bros. Bagels are packaging portable small-bite items in grab-and-go plastic containers and stocking them by the register. For instance, as customers pay for their meal at Einstein Bros., they might grab a plastic cup of sugared bagel bites for a treat later.

Corey Kaplan, owner of the two-unit New York City Bagel Deli in Chicago, pre-packages a variety of trail mixes and candies, as well as fresh fruit, which are sold by the register.

“We’re in downtown Chicago, and they come in for their breakfast bagels in the morning, but they also grab a bag of trail mix or gummies or chocolate pretzels to take back to their office so they don’t have to leave their desks later,” he said.

Riggs of NPD said consumers are snacking more for various reasons. Some say they are looking to save money or time, others are trying to control calories or responding to cravings. Some also said they are snacking more to relieve stress or out of boredom.

In a way, the recession has helped fuel the snack trend, Tristano said. “When diners go out, they’re ordering less, but that also means they’re getting hungrier throughout the day.”

“Is it the marketing and promotion of snacks that’s driving the trend, or is it behavior?” he said. “It’s hard to say.”