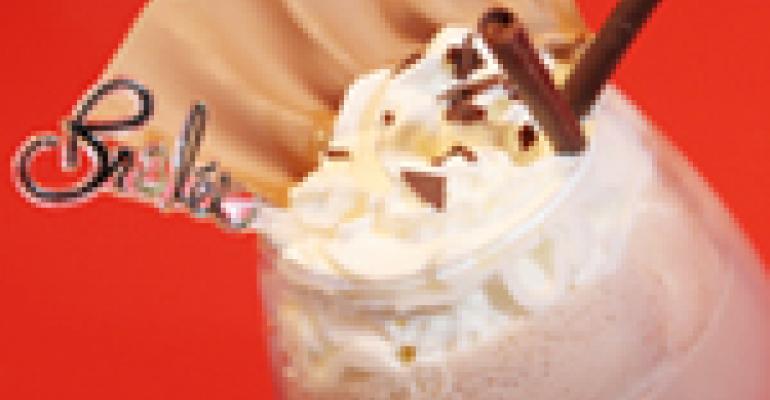 In a quest for new desserts, restaurateurs go with the flow

As restaurateurs strive to find new ways of addressing customer demand for variety, many are targeting the after-dinner crowd with drinkable desserts. From milkshakes to liquid versions of homestyle post-meal favorites to new twists on the martini, the treats are emerging as a favored way to build checks and stay attuned to the fickle patrons who strive to challenge dining conventions.

Lemoine has previously worked at Fleur de Sel with Cyril Renaud; at La Caravelle with Laurent Richard; and at Le Cirque with Jacques Torres.

"Recognizing that the dessert menu needed a breath of fresh air, I decided to re-direct my focus in a more conceptual manner," he said in a statement released by a supplier with which he works. Lemoine explained that he decided to combine elements of the bar, often the first stop in a guest's dining journey, with pastry. He's dubbed the results "Dessert Cocktails."

Acclaimed pastry chef Sue McCown of Coco la ti da in Seattle made sure to include liquid desserts on her menu when she opened her dessert-focused restaurant last November. "I can't just do basic desserts," she said. "Ok, I can, but I don't want to. I haven't done crème brûlée for over seven years. You can get that anywhere. I love it and appreciate it, but I don't want it on my menu."

McCown had previously worked at the Earth and Ocean restaurant at the W Hotel in Seattle as executive pastry chef. In her seven years there, she was responsible for creating 52 signature desserts.

"As more and more of the culinary is finding its way into the glass, it opens a whole bunch of doors for drinkable desserts," said Stacy Schulist, director of marketing, restaurant and catering divisions for Libre Management. "Customers are looking for something satisfying and a little bit different but familiar at the same time."

Corporate mixologist Peter Van Thiel created several liquid desserts for Brulee, all priced around $16. The menu offerings include the Lambic Shake, which is a summertime specialty made with a blend of raspberry Belgian beer and homemade vanilla ice cream. It is served in a chocolate-shelled Bordeaux glass. Brulee also offers a Hot Buttered Chocolate, which is a twist on Hot Buttered Rum; and a Blueberry Amoretto Sour, made with Blueberry-infused Amoretto that "adds a refreshing twist to this classic," Schulist said.

Stefanie Lawson, director of operations for Finale Dessert Co. in Boston, agrees that the drinkable dessert trend is on the rise. "Customers are looking for indulgence but they're not necessarily looking for a huge enormous dessert," she said, also noting that the sales of dessert martinis have "absolutely" increased in the last six to 12 months.

Several New York-based restaurants are also indulging in the drinkable desserts trend. At davidburke & donatella, pastry chef Monica Bellissimo's created a Chocolate Bread Pudding that "comes with a playful take on a classic." The bread pudding is accompanied by crunchy caramel, chocolate ice cream and a New York-style egg cream served in a mini high-ball glass, complete with straw and frothy topping.

At the recently opened BLT Burger, customers can choose from a substantial list of creative non-alcoholic and spiked milkshakes for dessert. Offerings include the Twinkie Boy, a thick shake made with vanilla ice cream, a Hostess Twinkie and caramel syrup; the Shocker, $9, made with vanilla vodka, cookies and vanilla ice cream; and the Night Rider, $9, made with Kahlua, chocolate liqueur, cookies and chocolate ice cream.

Max Brenner of the two-unit concept Max Brenner, Chocolate by the Bald Man, took the drinkable dessert trend into consideration when developing the menu for his dessert venues, which opened in July and November last year in New York.

One of the drinkable dessert offerings at Brenner's concept is the Chocolate Soup, which is hot chocolate with a twist, since it comes with berries, marshmallows and chocolate waffle balls. It is priced at $9.95.

"The Chocolate Soup is very popular," he said. "Chocolate takes on so many different associations from nostalgia to whimsy, and people easily project a variety of emotions onto all of the different chocolate experiences that they can have at Max Brenner, Chocolate by the Bald Man. It's not just about the way the chocolate tastes, it's about how tasting chocolate makes you feel."

The restaurant also offers an Eighties Milkshake, $7.20, made with vanilla cream and a floating scoop of ice cream, topped with crispy chocolate.