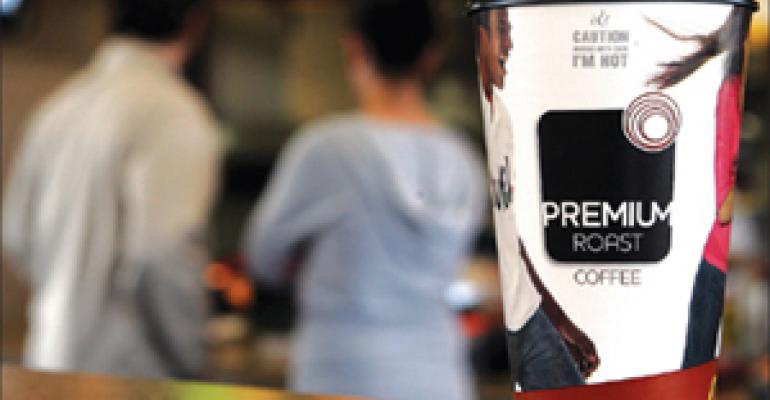 The lucrative beverage component of the quick-service restaurant business is taking a big leap forward as McDonald’s and other traditional segment players try to siphon off market share from leading coffeehouse chains by offering new varieties of teas, coffees and bottled drinks.

McDonald’s, now an espresso source like Starbucks, has ramped up its McCafe specialty coffee test following a 15-percent bump in its coffee sales since upgrading its regular and decaf brews last year.

Answering analysts’ questions at a recent conference in Las Vegas, Don Thompson, president of McDonald’s USA, said, “We expect to take some share out of the specialty coffee marketplace.” He declined to name specific competitors being targeted.

Meanwhile, segment leader Starbucks has downplayed speculation that McDonald’s and other traditional quick-service chains will have negative effects on the Seattle-based chain’s sales.

“We have not seen any impact from McDonald’s efforts to improve their brewed coffee and no impact from Dunkin’ Donuts’ efforts to introduce espresso beverages,” Starbucks chief executive James Donald told analysts at a subsequent conference in Las Vegas. “More educated customers are good for all the participants in the business.”

McDonald’s, which recently said it was considering the sale of smoothies, is testing several new beverages, including hot and iced coffees, espresso drinks, sweet iced tea and bottled soft drinks, at thousands of restaurants. Its caffè latte and cappuccino varieties, for example, are in test mode in all of the chain’s 531 restaurants in the state of Michigan, and in other regions.

Dunkin’ Donuts, which introduced a line of espresso drinks in 2003, is more aggressively promoting them than in the past. The espresso line now generates more than 5 percent of total sales in 2006, a chain spokesman said. That would amount to approximately $235 million.

Dunkin’ Donuts, Starbucks Coffee and McDonald’s all have been giving away coffee in special promotions to call more attention to their beverage lineups. McDonald’s offers free cups of its regular or decaf coffee every Monday. Starbucks gave away hot coffee for a full day recently, and Dunkin’ poured free 16-ounce cups of iced coffee in a one-day promotion.

McDonald’s test stores are working on speeding up service as they adapt to the specialty coffee platform, which uses an automated espresso machine that grinds the beans and brews the drink under pressure, steams either 2-percent-fat or skim milk, and adds optional flavor syrups. Thompson said he expects service times to decrease as test unit employees get used to preparing the drinks.

He emphasized that everything McDonald’s considers rolling out chainwide must fit customer demands for convenience and speed. Crew members’ mandatory offer to add cream or sugar to brewed coffee fits that convenience model, especially in the drive-thru.

“We think [the chicken biscuit] has the potential to make waves outside the South,” Thompson said. He did not further describe the product, and other McDonald’s spokesmen could not be reached for comment.

Not only has coffee contributed to McDonald’s strong breakfast daypart, but coffee in general has proved to offer especially good profit margins.

“You can’t get much better profit than by adding water to beans,” Thompson said. “It’s a great margin business and one that customers are asking for.”

Another product that offers an equal or even better profit margin is tea, which McDonald’s may capitalize on if it rolls out a sweet iced tea now being tested in some 4,000 restaurants. Thompson called both tea and coffee “an effective way to gain added customer visits.”

One of McDonald’s senior executives has registered to attend the World Tea Expo, the world’s largest tea trade event, this June in Atlanta, according to George Jage, the event’s president. If McDonald’s incorporates specialty teas into its permanent menu, it will have a major impact on tea sales in this country, he said.

“McDonald’s inclusion of flavored or specialty tea in its restaurant offerings will further move tea into the mainstream of Americans’ diet and consumption,” Jage predicted.

Frozen blended coffee drinks continue to gain popularity. Most specialty coffee chains are continuing to expand those lines, such as Coffee Beanery’s Frappalattes, which have gained 2 points in sales in the past year to account for 7.8 percent of sales.

Although few traditional quick-service chains have so far emulated those fast-casual players that augment their fountain soft drinks with bottled versions, McDonald’s is looking at that possibility as a way of offering more choices.

The challenge is to ensure that the restaurants maintain their higher profit margin from fountain drinks if bottled ones also become available, he said.

A Sandelman & Associates consumer survey of quick-service restaurant patrons disclosed that soft-drink purchases dropped to 47 percent of visits in 2006 from 52 percent in 2005, said Bob Sandelman, president of the industry research firm. Coffee purchases gained 1.1 percent in the same period, up to 3.5 percent of visits, compared with 2.4 percent a year earlier. Tea and water purchases also increased slightly.

However, Sandelman said he does not see espresso drinks becoming a major part of business at traditional quick-service restaurants.