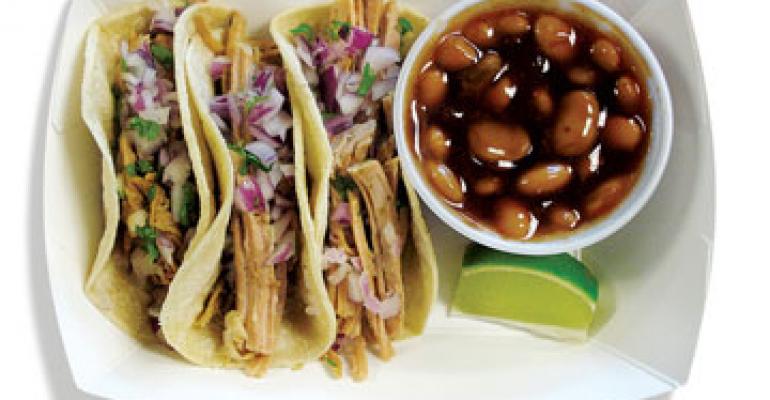 Ted Stoner, Qdoba’s head chef and director of strategic product development, said the street tacos were inspired by his visits to Mexico. They also compete with the more authentic street tacos offered by food trucks in various cities across the United States.

Stoner predicted Qdoba’s street tacos would appeal to guests looking for a more healthful option or a smaller-portion alternative to the chain’s popular burritos.

The dish includes three tacos made with four-inch corn tortillas filled with Qdoba’s signature slow-cooked pulled pork or shredded beef, topped with red onion and fresh cilantro, and served with a slice of lime. A plate of three comes with a side of Ancho Chile BBQ beans for a recommended $4.99.

Stoner said Qdoba was testing its version of street tacos when Taco Bell’s Cantina tacos offer came out. “When we saw Taco Bell doing it, we figured the marketing would drive more awareness,” he said.

Qdoba’s street tacos will be available for about two months, varying by market, he said.