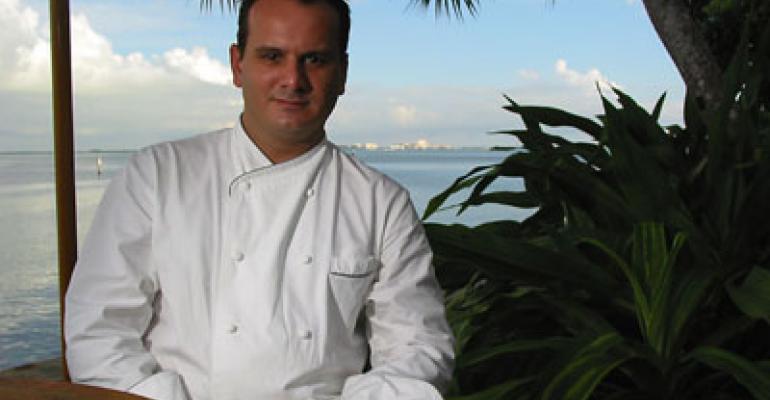 Phillips Seafood restaurants, based in Baltimore, are known for straightforward crab cakes at their 17 fine dining, casual, seafood buffet and fast-casual restaurants up and down the East Coast.

Now the company is branching out with Bombora, an eclectic restaurant in the seaside resort town of Ocean City, Md., that opened in April.

Running the kitchen is executive chef Arturo Paz, who is dishing up items such as tikka masala glazed chicken wings with toasted almond dust and sour orange skirt steak with confit fingerling potatoes and chimichurri sauce. He’s even shaking up the crab cakes: they’re served as sliders with tamarind tartar sauce.

A native of San Juan, Puerto Rico, Paz most recently revamped the food and presentation at Phillips Harbor Place in Baltimore. Before that he was a consulting chef at Phillips restaurant at Caesars Palace in Atlantic City, N.J., working under his mentor, Robin Haas.

Where does the name Bombora come from?

In [aboriginal] Australian it means “big waves breaking offshore.” It just happens that there’s a surf spot on the inlet on the shore here, and we’re trying to create big waves with this spot in Ocean City.

What are you doing that hasn’t been done before in Ocean City?

We’re trying to bring in these New World cuisine-type flavors, focusing on Latin and Asian flavors. It’s sort of a fusion of World Cuisine with Atlantic Shore.

I looked at what other restaurants were doing around town, and nobody was doing anything quite like that.

We also thought it would be a great idea to bring a new style of dining to town. We’re trying to have more of a family sharing-style type of experience with small plates and large plates.

But New World fusion is hardly anything new.

Ocean City has for years been mostly seafood restaurants, and mostly buffets. Everyone’s going for the crab buffets in the summer here: There are half a dozen of these huge crab house restaurants. So we’re going pretty much against what everyone is looking for.

Some other people are starting to introduce new concepts. They’ve been doing fusion of Atlantic shore and farmers-market-driven cuisine.

We’re introducing flavors from India, Vietnam and Indonesia, and also flavors from my end, with Caribbean dishes and South American ceviches.

All this stuff that I’m doing is kind of foreign to the people around here, and we want to deliver something that’s unique.

How have your customers reacted?

We’ve gotten great feedback. People were ready for it, but no one was adventuresome enough to pull it off. Even the older crowd that used to go to the [traditional] Phillip’s is embracing the fact that something’s different.

What are some popular menu items?

We have been having great feedback with the shiitake pot stickers [with Asian dipping sauce] and the grilled shrimp with a tamarind soy barbecue sauce and grilled pineapple relish. The green curry tuna tartare [with wonton chips and pea shoots] has been selling really well.

Everyone’s excited to see the whole fried yellowtail snapper, because it comes to the table whole [and upright], like it’s still swimming — the kind of presentation that you’ve seen plenty of times but that no one’s seen here.
The crab cake sliders have also been really popular.

What future plans do you have for the Bombora concept?

The whole idea is to franchise it, but it’s way too early in the game to have any direction regarding that. We’re testing the concept in Ocean City to see what the feedback is.