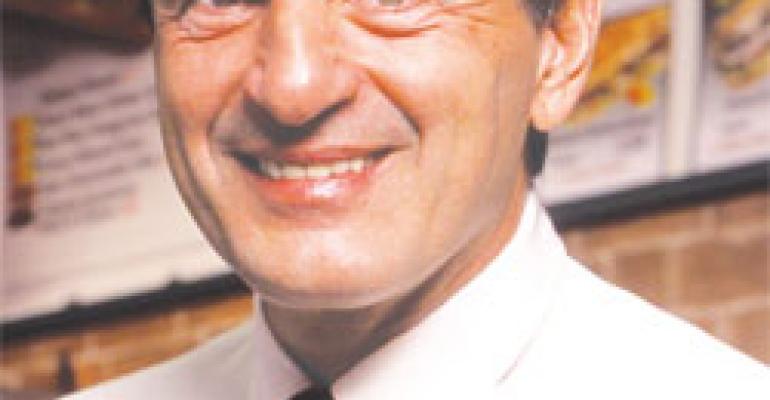 Fred DeLuca, co-founder and president of Subway, started the quick-service sandwich restaurant with the intent of making extra money to help pay for college tuition. Today, Subway has 34,000 stores in the system. One of this year’s Golden chain award winners, DeLuca recently talked to Nation’s Restaurant News about the importance of staying connected to the operators, why he never took Subway public, and his days as a pre-med student.

You had big dreams for rapid expansion, so why didn't you and your partner, Dr. Peter Buck, take the company public?

Pete and I talked about that only once for about a half an hour. We asked ourselves if we really wanted to have a lot of other stockholders to answer to when it was already challenging enough to work with the franchise owners.

We weren't quite sure that the goals of public shareholders would be the same as ours and of the franchisees. Franchisees' goal is to make money at the store level, which is simultaneously good for the whole system. Shareholders may think differently from time to time, so we decided against it.

The story goes that you started Subway with the goal of making tuition money for medical school. What changed that?

The idea of going to medical school was never an internally grown idea. Part of that was parental coaching – you know, your mom says, "Oh, son, you should be a doctor." That sounded like a good idea, so I applied for pre-med in college.

But I found my temperament was not well-suited to the kinds of study I'd have to do to be a good medical student … I also realized that maybe it wouldn't be a good idea to be a medical school student running a sandwich company.

People of your intellect are typically big readers. What books do you like to read?

Honestly, I probably should read more, but most books require hours of focus, and lately I'm a short-attention span guy. But I’m also an information-overload victim. I've got it coming at me from all directions in my work, so I guess that's of my own making. I probably get about 30 custom-designed reports each week that have to do with the running of the business, so I'm already reading a lot.

After 34,000 stores and 45 years, you still enjoy running the company. Is it true that even when you travel, your fun is really work?

Periodically, and especially when we go to new markets, I get to enjoy exploring, just taking some time to see what else is going on in the world. I like that. It's fun. But if I travel to a city where we have stores, I'll ride from store to store with the development guy, start early and keep going until we feel we're done, sometimes all day. I talk to Subway owners and eat lots of Subway food – no fancy restaurants.

Isn't it unusual for a company president to be as involved as you are – especially in a chain this large?

Yes, I do think it's unusual. I think most in my position delegate that out to the operations people. But I don't because I really like to hear what the owners are saying.

For example, when I go to normal meetings at headquarters or for advisory counsels, you talk about high-level things, big picture issues. But when you talk to operators, you talk about nitty-gritty operational things and what they're observing in the stores. I enjoy that.

I hear water splashing in the background and I know you're in Ft. Lauderdale. Are you at the beach?

No (he laughs). But I've been in the pool most of the time we've talked. I never get in the darn thing it seems, but I thought, "I can sit in here and do an interview! I don't need to be in front of a computer to do that!"