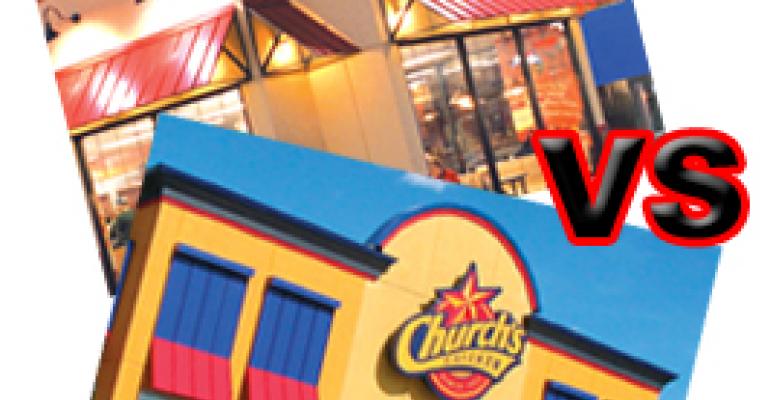 ATLANTA AFC Enterprises Inc., the franchisor and operator of Popeyes Chicken & Biscuits, filed suit Wednesday against Church's Chicken and a former Popeyes franchisee over the Feb. 5 sale of 10 Popeyes units in the Rio Grande Valley of Texas.

AFC claims Church’s colluded with Popeyes' former franchise group, CVI Co. Ltd. of McAllen, Texas, and its principals to breach their franchise, development and guaranty agreements with Popeyes. It also asserts that the franchisee intended to harm Popeyes by selling its restaurants to Church's.The 1,876-unit Popeyes is seeking more than $20 million in damages., which filed the suit in the State Court of Fulton County, Ga.,

Church's Chicken, the 1,600-unit quick-service operator also based in Atlanta, said it had acquired the 10 Popeyes units as part of its strategy to appeal to the growing Hispanic market. The company said it would convert six of the restaurants into company-owned Church's units. Plans for the other four sites had not been determined. Church's executives could not be immediately reached to respond to the AFC lawsuit.

AFC, which had owned both brands, sold off Church's in December 2004 to the private-equity firm Arcapita Inc.

"Popeyes welcomes honest competition. But when a competitor instead chooses egregious acts with the intent to harm another's brand, we are compelled to respond," said Ken Keymer, chief executive of AFC Enterprises. "Having been in the franchising industry for over 25 years, I have never witnessed such outrageous actions by a franchising company. We believe it is our duty, as a respected franchisor, to protect the franchising industry against companies that do not recognize and honor contractual agreements and, instead, choose to operate outside of industry norms."

"To our valued guests in the Rio Grande Valley, Popeyes intends to return to your area and we are currently exploring options to do so," Keymer concluded.