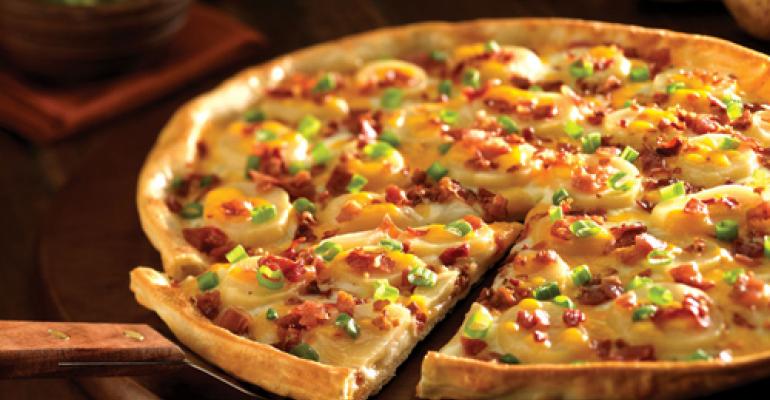 Idea for new pizza came out of internal company contest

Created by a South Carolina Pizza Inn employee, the Baked Potato Pizza has become a hit with customers, the company said.

The pizza features a ranch-dressing base with mozzarella, cheddar, bacon, sliced potatoes and a sprinkle of chives upon delivery. The introductory price is $10 for a large pizza, said the company, which based in the Dallas suburb of The Colony. The pie also is available at the company’s buffet units.

The potato pizza resulted from Pizza Inn’s companywide Culinary Challenge, a competition that debuted this year among employees and franchise owners.

Chris Cuthbertson of Greenville, S.C., created the pie by combining his taste for the all-American baked potato with his knowledge about Pizza Inn, where he began as a dishwasher 10 years ago. Cuthbertson now serves as district manager over two locations in South Carolina.

“I love baked potatoes,” Cuthbertson said. “I thought to myself, ‘Why don’t we have a baked potato pizza?’”

Cuthbertson said he sells an average 150 Loaded Baked Potato Pizzas a week on the buffets.

Charlie Morrison, president and chief executive of Pizza Inn, said, “The success of the Loaded Baked Potato Pizza is proof that fantastic ideas can come from within.”