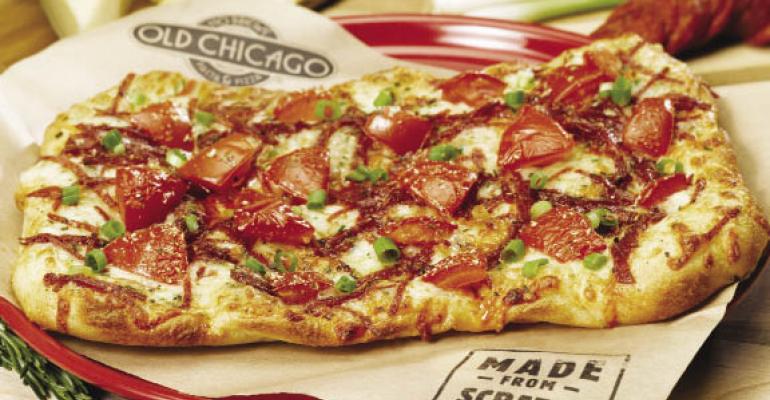 Old Chicago, a chain based in the Boulder, Colo., suburb of Louisville and specializing in deep-dish pizza, started experimenting with artisan-style pizza two years ago.

The chain offered a variety of premium toppings on the new pizzas, such as prosciutto, fresh sage and onion confit, and a more pungent cheese blend of mozzarella, Swiss and Parmesan.

Thom said the pizzas did “OK” two years ago. But when they were reintroduced last year, sales of the pies nearly doubled.

So last month Old Chicago added three of them — prosciutto and cremini; rosemary, pepperoni and oven-roasted tomatoes; and shrimp and bacon — as permanent items at five of their 98 restaurants.

The pizza market is being affected by many of same trends as other segments of the industry — consumers’ desire to customize, interest in premium ingredients and even nutrition.

And although pepperoni remains the king of pizza toppings by a large margin, according to The NPD Group, a Port Washington, N.Y.-based research firm, customers are showing an interest in experimenting with unusual ingredients.

Indeed, Los Angeles-based Datassential found that fennel was the fastest-growing pizza ingredient from 2009 to 2010, mentioned 60.7 percent more times on pizza menus last year than in 2009. Granted, it was mentioned just 24 times in 2010 versus 15 times a year earlier, but other nontraditional pizza toppings are seeing increased popularity, too.

Chicken pizza is being offered on 564 menus, up 5.3 percent from the previous year. Buffalo chicken pizza jumped 22.7 percent and is now on 176 menus. And mentions of blue cheese and ranch on pizzas jumped by 10 percent and are on 136 and 173 menus, respectively.

Datassential reviews more than 4,750 chain and independent menus for its research.

Cathy Manzon, director of marketing for The Loop Pizza, a 14-unit chain based in Jacksonville, Fla., that offers offbeat pizzas such as spicy cilantro chicken, Caprese, and spicy barbecue chicken, said the chain’s most popular toppings are still pepperoni, sausage and mushrooms.

That’s a good thing, Manzon said, because The Loop charges the same price for each topping regardless of the food cost.

“If everyone decides to order artichoke hearts, those are more expensive than pepperoni or mushrooms, but we’ve found that we’re doing OK [in terms of sales mix].”

The chain recently got rid of its large 14-inch pizza, and while its 12-inch pies didn’t move faster, sales of individual 8-inch pizzas went up tremendously — an indication that people like to customize their own pizzas.

The Loop also just launched an LTO based on the restaurant’s popular tomato bisque.

The pizza has regular dough topped with the bisque instead of marinara sauce. It also has a little bacon and Asiago cheese to mimic the Asiago crouton that’s served with the soup.

Back at Old Chicago, Thom also reformulated the chain’s thin-crust pizza. Using the same amount of dough, he stretched the pie from 14 inches to 16 inches, making it thinner and more in line with New York-style pies. The result is another pizza with a geography-based identity, just like its Chicago-style deep dish and Italian artisan pizza.

Pizza by the numbers