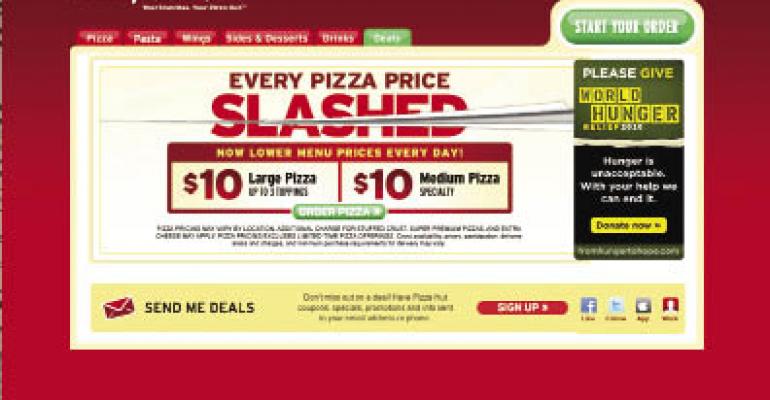 Cooler weather and a profusion of televised sporting events may be heating up pizza sales, but achieving store-level profits will be challenging for many pizza purveyors this fall as their widespread discounting butts heads with rising commodities costs.

While all restaurant operators are being affected by rising commodities prices, pizza players are being hit particularly hard as the costs of many pizza ingredients — wheat, pork, beef and dairy — remain high, even as pie prices at many chains have fallen throughout 2010.

Among the segment’s more notable margin squeezers this year:

• Pizza Hut in late 2009 introduced a deal offering any size pizza for $10. The offer has since been altered to include only pizza with three toppings.

• For the third time in 2010, CiCi’s brought back its $3.99 per person all-you-can-eat buffet offer for late September and early October.

Officials at all four companies declined to be interviewed, saying either they were preparing for quarterly earnings reports or preferred not to discuss sensitive sourcing information. But other pizza operators likened the new price pressures to rough rides on the block cheese market, forcing some larger firms to work on longer-term purchasing strategies, while some smaller companies are trying to tighten their belts operationally.

“When it comes to commodities prices, our goal overall is to keep a spike from occurring,” said Brian Ognian, senior vice president of franchise development at 568-unit Hungry Howie’s Pizza in Madison Heights, Mich. “If we can keep prices steady, we can really help franchisee profitability. That’s what they expect from us.”

A key cause of the spikes in many commodities prices is a drought in Russia. When the loss of nearly one-third of that nation’s crop halted its wheat exports this year, importer nations were forced to find grain from other countries such as the United States. That shift pushed per-bushel prices up from the mid-$4 range in June to the mid-$7 range in September.

Other wheat crop shortfalls in Ukraine, Argentina and Australia have tightened supplies of low-quality wheat used in livestock feed, and that’s shifted demand onto corn supplies to make up the difference. Higher corn prices translate into higher feed prices for dairy, beef and hog producers, and they’re passing their cost increases onto pizza operators.

“Everything is interrelated, so it’s tough to talk about any specific commodity price change that hasn’t had an effect on another,” said John Barone, president of Market Vision, a firm that advises restaurant companies on commodities purchases. With strong opportunities for export profits, Barone said the Department of Agriculture expects U.S. wheat producers to sell 20 percent more grain overseas than in 2009.

“And what’s happening in the U.S. is only a part of what’s going to affect prices worldwide,” he said.

Given the abundance of low-price deals at chains such as Pizza Hut, Domino’s Pizza, Papa John’s and CiCi’s Pizza, cost increases could prove troublesome even for companies with massive buying power and commodities hedges in place. Meanwhile, smaller operators are re-evaluating their practices.

Mike Rangel, co-owner of two-unit Asheville Pizza and Brewing, just increased all his toppings prices by a dime, and his staff is now pre-portioning all of its cheese.

“We’re going to weigh it and put it into small bags based on the size pizza that amount goes on,” said Rangel, whose company is in Asheville, N.C. “It’s easy to inventory when we do it that way because you can see exactly what you have and know exactly what you sold.”

The good news is the cost of cheese — the largest expense on a pizza — is well below record highs reached in 2008 and 2004, and Barone believes milk futures and other market indicators hint that cheese shouldn’t go much higher.

To offset low milk prices in 2009, dairy farmers culled their herds to tighten supplies, he said, “but really what happened was they retired a lot of older cows and have replaced a lot of them with younger ones producing more milk per cow. So supply shouldn’t really be an issue next year.”

Jack Butorac, president of Marco’s Franchising, which operates the 226-unit Marco’s Pizza chain based in Toledo, Ohio, believes the company is managing its cheese prices well so far. Where the company has relied on annual forward contracting in the past, this year it’s ordering just two- to three-month supplies.

Barone said higher prices for pork, used in many pizza toppings, are tied to strong demand for hog worldwide. Currently, significant exports are headed to Mexico and Southeast Asian nations, where recovery from the recession is not only well underway, but ahead of better-developed nations.

Chuck Thorp, chief executive of 54-unit DoubleDave’s Pizzaworks in Austin, Texas, said he’s locked in on wheat and meat for the next several months, but is riding the cash market on cheese. And while he wishes prices were lower, “I at least know what to expect, and we’ll deal with that,” he said.

Part of his strategy for staying profitable is to sell pizzas at regular menu prices while giving away high-margin appetizers to generate trial.

“In October, anyone who orders a pizza at our regular menu price will get two free Peproni Rolls with a bounce-back offer for four more free,” Thorp said. Not discounting its pizza differentiates DoubleDave’s from competitors’ low-ball offers, he said, and giving customers freebies adds value. “We’re even making our basic pizza a one-topping pizza, not just a cheese pizza, because we want to add value,” he said.

No matter how tough it gets, pizza veteran Leo Spizzirri said cutting product quality is the worst thing a pizza operator can do.

“I’ve been in pizza all my life, and the places I’ve seen being successful all that time are the ones not worrying about saving a couple dollars by cutting corners,” said Spizzirri, corporate pizzaiolo for the Francesca Restaurant Group in Chicago. He recently left 46-unit Giordano’s Pizza where he was operations manager.

“The stuffed pizzas there weighed 6 pounds sometimes, but when I was there, never did my boss say to leave out some cheese so we could save a little money,” he said. “He knew that’s what people loved and why they keep coming back.”