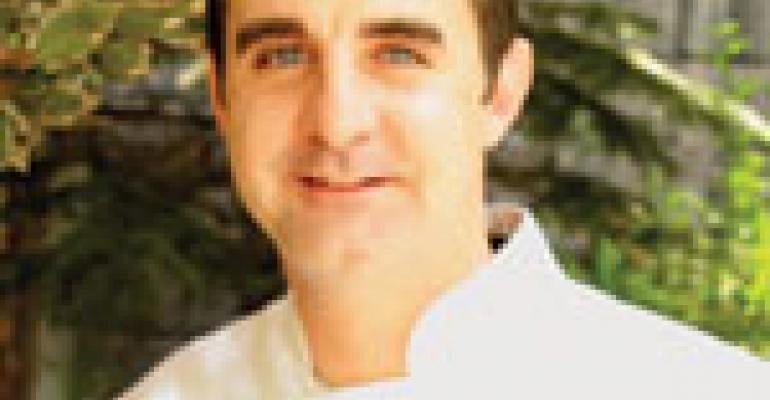 ASicilian grandmother is arguably one of the best things an Italian chef could have, and Anthony Priolo’s gave him a valuable head start in the Chicago dining scene by taking him along while she trekked all across the city to get the components for her recipes. Her passion for the best ingredients and willingness to pound the pavement for them inspired Priolo’s cooking at Chicago’s Coco Pazzo and Coco Pazzo Café, where for more than ten years he was executive chef and eventually partner.

There he met wine specialist and Naples native Ciro Longobardo. A year ago, the two set off on their own and opened Piccolo Sogno, which means “little dream,” in Chicago’s West Town neighborhood. As the restaurant celebrates its first anniversary, Priolo attributes its success to his commitment to his grandmother’s philosophy of always using the best ingredients he can find, whether they come from his own backyard or from Sicily.

How did you come to own your own restaurant?

I’ve always dreamt about it, and always talked about it with my buddy, Ciro, since I was at Coco [Pazzo Café]. He worked the front of the house at the cafe, and we met there in 1997. I think every chef’s dream is to have their own place. I’ve always wanted to, but I never wanted to do it on my own. Ciro and I finally ended up doing it last year.

How did you become a chef?

I worked my way up from a dishwasher. It started with my grandmother. She used to bake and cook a lot when I was a kid, and she used to babysit me.

She really influenced me to become a chef because she had such a passion for food, and it just rubbed off on me.

We used to take the bus for an hour just to get the best veal. So I learned from a really young age that for ingredients, no matter what it is, you’d have to go a really long way to get them. We used to do that all the time. We’d go everywhere by bus.

Where do you get your ingredients now?

Career highlights: having his own restaurant

Not by bus. I get them from local farmers I grew up with. I’ve got a pig guy in Michigan. And a lot of our produce, especially in the summer, is from local people. I pair with one farmer, and he grows a lot of our stuff for us. In the summer, I’d say 70 percent of our produce is from that one farmer. But cheeses and prosciutto and flour, other stuff that helps make the restaurant become a true Italian restaurant, I try to find and source from Italy. With the Parmesan cheese, I know the one in Italy is far superior, so I’ll get that. But for a traditional dish like porchetta alla Romana, I’ll get a local pig and roast it in a traditional way.

What are some of the other things you bring in from Italy?

I bring in Sicilian pistachios and blood orange, and salt for cooking and table service. It’s the best salt in the world. I do a fish that we bring in from the Mediterranean that is baked in a Sicilian sea salt crust, and it’s just like if you were eating it there.

Does Piccolo Sogno specialize in a particular kind of Italian cuisine?

I try to keep it pretty regional, whether it’s from Puglia, Rome, Florence, Naples or Sicily. Where I used to be it was very Tuscan, but here I can do whatever I want. I have someone growing greens for us. They are like rapini, and typically they’re served with sausage in Naples. We had it in Italy when I was there in January, and we’re going to bring that here. And we had porchetta, which is a Roman dish. Whatever we find that is the best, we bring it back to Piccolo Sogno.

When making risotto, use a wooden spoon so you don’t break the rice.

How often do you go to Italy?

At least once a year. In January we were in Rome, Florence and Naples. Next time I’m going to try to stay more south and go to Sicily and Sardinia.

Do you have any signature dishes?

I’d say the pizza is one, and the porchetta is another. Each week we get three whole, 37-to-40-pound suckling pigs. I debone them, then marinate them in olive oil, rosemary, fennel and garlic. Then I tie them and roast them slowly. That’s sliced into medallions and served with roasted potatoes in a natural reduction.

We use the heads for broth, but I take the cheeks out first and make guanciale, it’s like a bacon. We save them up for a pasta dish. It takes about a month and a half to cure them, so I cure and freeze them, and when I have enough I serve the pasta dish.

What is your favorite ingredient to cook with?

Whatever is fresh. In the spring it was fresh porcinis. I got them out of Washington and used them in a risotto, or when they’re really fresh I put them in a salad, sliced raw with Parmesan and red-wine vinaigrette. They’re great.— [email protected]