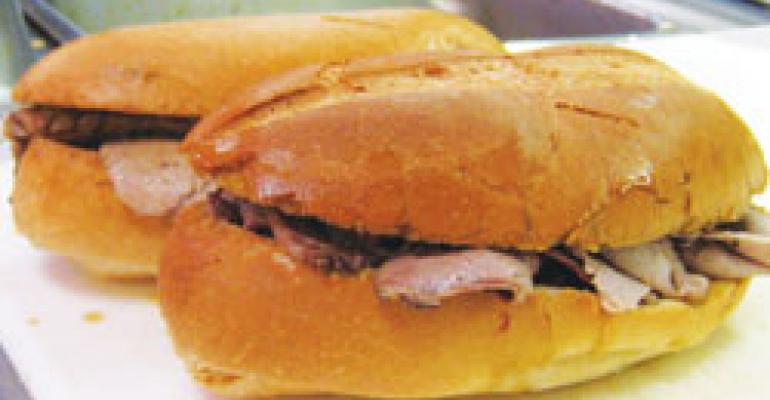 Like its legendary hot mustard, Philippe the Original's success this year in the face of an economic downturn that has cut sales at most other restaurants brings tears of joy to its owners.

“It gets pretty busy,” said Richard Binder, a third-generation member of the family that owns and operates the restaurant, whose sales were up about 20 percent in 2009. “It makes our banker happy.”

Afixture in downtown Los Angeles since opening in 1908, Philippe the Original is known for its sawdust-covered floors, communal tables and claim to fame as the inventor of the French-dip sandwich, which has long been disputed by nearby competitor Cole’s. Philippe has changed little since moving to its “new” location near the city’s Union Station in 1951.

Still, more than simply a relic from Los Angeles’ past, Philippe is the lucky beneficiary of a perfect storm of events that include an influx of residents to downtown L.A., an economy that favors lower-priced restaurants and an opportunity to promote the establishment by highlighting its first century in business.

With its famous sandwiches ranging in price from $5.50 for French-dipped beef, pork, ham and turkey to $6.75 for lamb, not to mention its 9-cent cup of coffee, Philippe has managed to stay affordable for both its longtime clientele of policemen and firemen as well as the families visiting over the weekend and a downtown residential population that has swelled by about 10,000 over the past decade. Unlike many other places, Philippe, which roasts its beef for about three and a half hours, dips its sandwiches behind the counter instead of providing an au jus cup for customers.

“People get a great sandwich for five and a half bucks,” said Randy Hiatt, president of Costa Mesa, Calif.-based consultant Fessel International. “Price is a huge driver in these times.”

Couple that with an atmosphere that includes counter workers into their fourth decade with the concept and a row of wooden phone booths, and you have a restaurant whose best days are right now. While Binder declined to disclose annual sales, the 400-seat, 12,000-square-foot restaurant serves about 3,000 sandwiches a day with a check average of about $8.50, suggesting annual food and beverage sales in the $9 million range. The restaurant also sells merchandise, such as bobblehead dolls and T-shirts.

“I like the old-fashioned atmosphere and the priority they give to service,” said 64-year-old middle school teacher John Cromshow, who likes his lamb sandwiches “double-dipped” and points to the restaurant’s classic water dispenser as one of the touches that has been bringing him back once or twice a month for the past 40 years. “Look at those water spigots!”

The success is a far cry from the restaurant’s humble beginnings, when Philippe Mathieu opened a sandwich shop just north of downtown in 1908, and may or may not have invented the French-dipped sandwich about a decade or so later.

“One story goes that a sandwich was accidentally dropped in a pan of au jus and that it was a happy accident; [another] that it was a fireman who wanted it dipped because the roll was a little stale or hard,” said Binder, 56, adding that Mathieu tried using items such as pickles and relishes on the bread to soften it up before eventually settling on the au jus.

“Philippe was pretty cheap, and he liked to use everything that was left over,” Binder continued. “But it wasn’t like an overnight invention. It was kind of a work in progress.”

Upon retirement, Mathieu sold Philippe to his brothers Harry and Dave and Frank Martin in 1927. Frank Martin is the maternal grandfather of brothers Richard and John Binder, the restaurant’s current general managers. Twenty-four years later the trio was forced to move the restaurant about a half mile north to a building that had housed a machine shop and hotel because it was in the path of what was to be the Hollywood Freeway.

Since then, business has ebbed and flowed with the fortunes of the city, and the downtown area in particular. Binder said that the 1992 Los Angeles riots were particularly hard on business.

“You’d walk in the place, and it’d be empty at lunch time,” he said.

Ayear later, though, Philippe had the first of its anniversary promotions, when it charged 1908 prices for its 85th anniversary. It has done so for every five-year interval since.

Sales at downtown restaurants like Philippe have also been helped by the influx of younger professionals moving into the nearby factories and century-old office buildings that have been converted to apartments and lofts.

“It is such a significant part of L.A.’s history when it comes to restaurants,” said Alexander Stettinski, director of marketing for Downtown Center’s business improvement district, who visits Philippe once or twice a month. “But I also think the renaissance of downtown has helped generate more business for them.”

As for the hot mustard, sales often come from a source that Mathieu never would have dreamed of a century ago, said Binder, pointing to the free publicity Philippe received when the restaurant and its nasal-clearing mustard was featured on Travel Channel’s “Man v. Food” in February 2009.

“I keep seeing reruns of it,” Binder said, noting that Philippe sells about 800 bottles of its mustard a week. “We can always tell when they come on, because our mustard sales instantly go up that night over the Internet.”