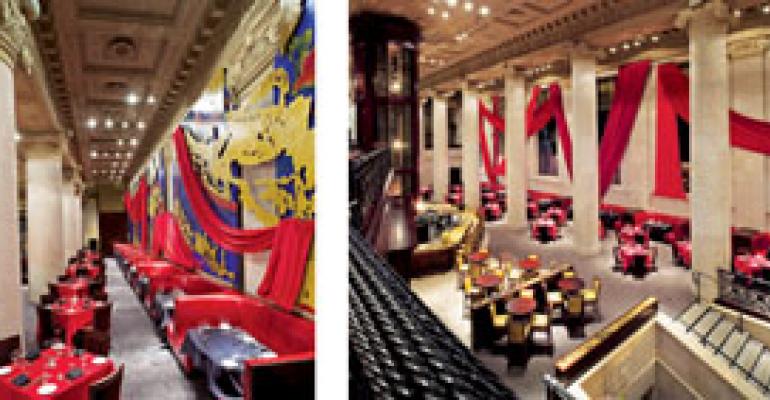 When Del Frisco’s Double-Eagle Steakhouse set out to expand from its original Dallas location, officials faced the difficult choice of whether it was best to attempt to reproduce the look and feel of the first unit, or to break the mold and concentrate on making unique restaurants that would embrace the individuality of each community.

They decided individuality was the way to go, so each of the chain’s eight units reflects the distinct character of its metropolitan locale, including the newest Del Frisco’s unit in Philadelphia.

The restaurant, which opened in November 2008, is housed in the former First Philadelphia Bank in downtown Philadelphia’s historic Packard Grande Building, creating a dramatic stage for the upscale concept’s traditional steakhouse fare.

“When you walk in, there are eight giant columns of marble going all the way up to the ceiling, and the ceiling itself is ornate with rosettes in it and carvings of ships and things,” said Shang Skipper, general manager of Del Frisco’s Philadelphia.

The 26-story building was originally built in 1922 and now hosts a variety of retail, restaurant, office and residential tenants. The steakhouse occupies a three-story, 23,476-square-foot space that previously housed a bank. Back in the days before people managed their finances online, banks frequently were enormous and ornate, which means their empty sites can make excellent locations for restaurants.

“There’s not a lot of use for these buildings,” said Bill Aumiller of Aumiller and Youngquist, Del Frisco’s architect. “With everyone banking online they certainly don’t need brick-and-mortar buildings with the size and space and splendor that was involved in a lot of historic bank spaces. Restaurants seem to be a very good fit for them. Clubs can also be a good fit for [those spaces], but otherwise it is limited.”

The restaurant, which is impressive in its size, seats 556 people, Skipper said.

“When you walk in, the first thing that you see is that there’s 38 feet to the ceiling, and it’s just grand,” said Skipper. “But then you see the 34-foot wine tower in the center of the bar.”

The wine tower that rises from the main bar is climate controlled and holds about 2,500 bottles of wine. A spiral staircase winds up the tower, helping to create a dramatic wine presentation that is consistent in all eight Del Frisco’s units, Aumiller said. Among other cities, Del Frisco’s has outposts in Las Vegas, Charlotte, N.C., Denver, Houston, New York and Fort Worth, Texas.

“Wine presentation is a big part of the Del Frisco’s identity,” Aumiller said. “It’s strong in all the restaurants.”

In the case of the Philadelphia unit, the wine tower even helps to draw customers.

“When people look in from outside, they see that wine tower and they know there’s something going on inside,” he said. “It definitely gives the message that wine is important in this restaurant.”

The private-dining room in the basement has five separate private-dining areas, two of which are in the main vault. Setting up the private dining room was tricky, because the vault walls and ceiling were covered with five inches of metal, Aumiller said.

“If we ever had thought of taking that out, we just said, ‘Forget about it,’” Aumiller said. “It would take too long and cost quite a bit. So we took out just what we needed to bring air conditioning and heat into the space, and then we left it. It’s great for parties.”

Even the enormous vault door was left in place.

“Trying to move it out of the building would have been next to impossible,” Aumiller said, “and we wouldn’t want to; it looks too good.”

Touches like the vault door really help the place maintain its character, he adds.

“We don’t want people to think this was never a bank,” Aumiller said. “We want them to think, ‘How long ago was this a bank?’ and get really into the history of it.”

Few restaurants would move into such a space with the intent to gut it and make it minimal or modern. But Del Frisco’s brand identity revolves around the idea of blending the traditional and the modern, so it was still important to update the space and keep it contemporary. The goal was to create a traditional, but not historical, ambience, said Aumiller. In contrast, the Del Frisco’s restaurant in New York, which is also in a former bank, is in an open, modern space with glass windows on three sides. So Aumiller said the task was to create an overlay of tradition to add to the space. The Philadelphia location had the opposite situation, and it was necessary to generate a modern feel in a museumlike historic landmark.

Another issue with the space was that the cavernous, carved stone interior was beautiful, but it created some unpleasant acoustic issues.

“We got some acoustics engineers in, and the report came back and said just what you’d expect: Put carpet on the floor and put soft pieces on the walls,” Aumiller explained. “Hence the artwork and curtains. That’s not just there for appearance.”

The curtains were necessary to modulate the acoustics, but the space was already so grandiose and traditional that they did not want to bring in more traditional full-length curtains, Aumiller said.

“We thought, ‘Let’s play with it,’” he said. “We let it be a little haphazard and took a contemporary swipe at it.… Some hang down straight, but not many of them. The rest swag down to one side or the other to get a little bit of sense of humor to the space, so it doesn’t take itself too seriously or get too stodgy.”

Because Del Frisco’s is a steakhouse, it was important that that traditional element be present but not too heavy-handed, Aumiller said. The traditional steakhouse aesthetic is largely based on the atmosphere of old London gentlemen’s clubs. And while no one would confuse Del Frisco’s for anything but a steakhouse, Aumiller’s goal was to make the space more contemporary and appeal to a modern audience of men and women.

“It’s not a men’s club anymore; it’s a people’s club,” Aumiller said. “Everyone should be comfortable in this space.”