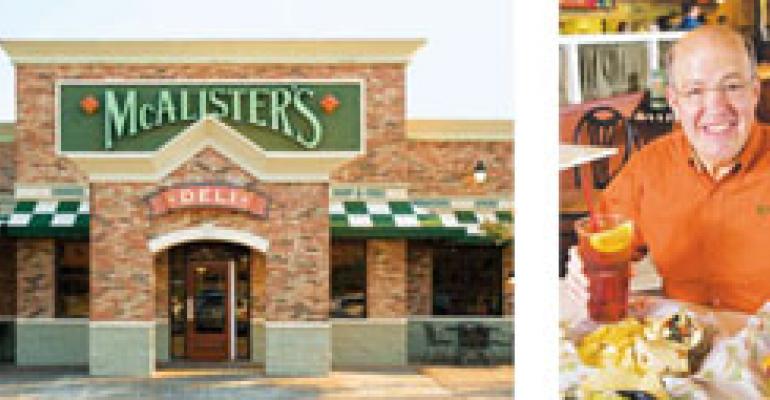 Guiding a nascent restaurant chain from 30-odd units to nearly 300 and making it a player in the competitive sandwich segment is no easy feat. But Phil Friedman has done just that.

Since taking over 10 years ago as chief executive of McAlister’s Deli, Friedman has grown the Ridgeland, Miss.-based fast-casual chain nearly tenfold in unit count, reaching about $343.4 million in U.S. systemwide sales for the fiscal year ended December 2008, according to Nation’s Restaurant News’ 2009 Top 200 survey.

Those who have watched McAlister’s growth credit both Friedman’s acumen and his tireless energy.

“There are very few people like Phil Friedman in the country,” says industry veteran Ron Powell, former president and chief executive of Sagittarius Brands, the parent of Captain D’s Seafood and Del Taco, who has known Friedman since they both worked at Marriott Corp. in the 1980s.

“When I look at restaurant execs or successful people, they always have a combination of unusual traits,” Powell says. “I think in Phil’s case it is energy and intellect. So many times, people that are really bright, they are cognitive thinkers but not actually doers. Phil is the kind of person who [has] the intellectual capacity to understand and boil down complex situations into relatively simple situations, but he also has the energy—the constant stream of energy to visit the restaurants, understand the franchisees’ needs. He is just tireless.”

Friedman says he and business partner Mike Stack struck at the right time when they engineered the deal to take over McAlister’s, which specializes in sandwiches, soups and salads, in 1999.

“What intrigued me was a couple things,” Friedman says. “It was sandwich. Sandwich was growing, and it still grows. It was quality. It was a brand that was already established; it was in six states. But it really needed broader executive leadership. The entrepreneurs got it to a certain point. It needed organization, and it needed experience for where to go next, to grow from 35 restaurants and beyond.”

Friedman attributes the chain’s growth over the past 10 years to his team’s prior experience at larger companies.

“The reason we were able to buy it and do it was that we have worked at bigger organizations,” he says. “I think the trick was to not stifle the growth by going too fast, too soon, but by adding infrastructure, by bringing in the right balance, so we could grow financially as well as number of units, and do it well.”

In the sandwich segment, Subway leads the pack with $9.64 billion in U.S. systemwide sales in its latest fiscal year, followed by Quiznos at $1.7 billion and Jason’s Deli at $467 million, according to data from NRN’s 2009 Top 200 survey. McAlister’s is in the middle, followed by Schlotzky’s at $234.9 million, Blimpie Subs & Salads at $227.8 million and Potbelly Sandwich Works at $213 million.

McAlister’s chief financial officer Lewis Loeb joined the chain just a few months before Friedman and has seen the impact Friedman has had on the infrastructure and long-term planning. Loeb admits that McAlister’s was not a particularly strong investment for potential franchisees 10 years ago.

“The economics were not what they need to be,” he says. “The investment cost was way too high, based on sales levels. And Phil, one of his strengths is really the strategic planning, the analysis and the implementation. Phil got the cost of building down. We certainly improved our margins, especially in food costs, with portioning. We changed distribution companies. We started using measures such as sales per labor hour. Within a year to a year and a half, our economics had improved greatly and we were able to begin franchising at that point.”

Friedman’s path to the top of McAlister’s began outside of foodservice. Friedman played football as an undergrad at the University of Connecticut, then went on to get a master’s in business administration from the Wharton School of Business at the University of Pennsylvania. He started in the manufacturing business after graduating from Wharton in the 1970s but switched to restaurants after hooking up with Pepsi, which at the time had just acquired Pizza Hut.

“They gave me a choice of different things to do,” he recalls. “I thought it would be interesting to enter the restaurant business. I joined as director of financial planning for Pizza Hut. I worked on international, new concepts and the distribution business for a while.”

Powell notes that Friedman’s enthusiasm for the industry has not waned over time.

“I remember one time we visited a number of his McAlister’s restaurants, then went out for dinner,” Powell says. “On the way home it was 10 o’clock at night and he stopped back by the office so he could answer e-mails that he had gotten when we were out touring restaurants. And we stayed there till 12 or one in the morning.”

Although McAlister’s is a regional chain, it has the potential to be national, Friedman says.

“When I visited Mississippi, I was able to see that the concept had very broad, national appeal,” he says. “The way I described it in the thumbnail is that the guests were Eddie Bauer customers. What I meant by that is that they could have been anywhere in the country. They just happened to be in the South.”

McAlister’s has worked to sustain sales as cost-conscious consumers tightened their wallets during the recession, Loeb notes.

“We created in the past year some products that really addressed the economic times,” he says, pointing to the Choose Two offering, a promotion that allows customers to pick two menu items for $5.99. He adds, “We also introduced a lower-cost line of panini sandwiches.”

Loeb says customers have responded to the offerings, which have been available since January. The Choose Two promotion accounts for 16 percent of sales, and the lower-cost paninis are about 5 percent of sales, he says.

Franchising has been McAlister’s primary growth driver during Friedman’s tenure, and the chain will continue on that path, even though the economic slowdown has made access to credit difficult. With 300 stores in sight, McAlister’s next will shoot for 500. Friedman says he is confident the concept can get there by filling in markets and entering new ones.

“We are attracting franchisees who have the capability of growing,” he says. “A number of our franchisees have gotten good scale, so they can grow. And we see that both in our current footprint and as we expand to other territories.”— [email protected]