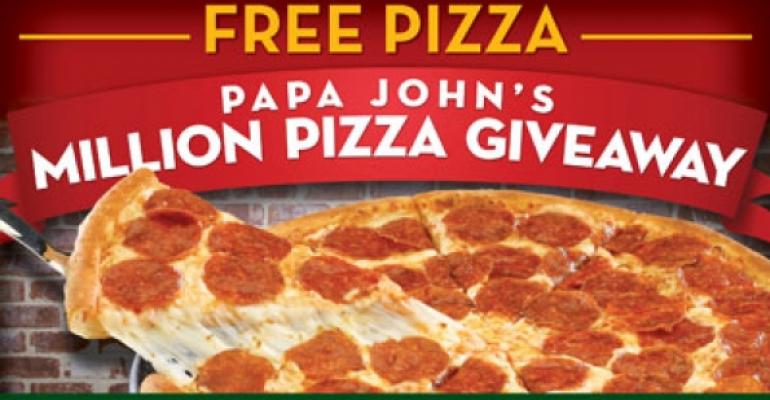 Papa John’s International Inc. is kicking off its second season as the official sponsor of the National Football League with the Million Pizza Giveaway, an offer that promotes its Papa Rewards online loyalty program.

“The Million Pizza Giveaway gets our pizza right where we want it: in the mouths of new and existing Papa Rewards members,” Andrew Varga, chief marketing officer at Pap John’s, said.

Members of Papa John’s loyalty club will be entered into a drawing to receive one of 60,000 large, one-topping pizzas the chain will give away each week of the NFL’s regular season. Customers can claim their pizzas by redeeming 20 points deposited into their Papa Rewards accounts. They can enroll in an account any time during the NFL season at Papa John’s website.

The nation’s largest pizza chains have been especially innovative with online ordering and digital marketing over the past several years. Papa John's spokeswoman Tish Muldoon said the chain has more than 1 million people enrolled in the Papa Rewards program.

Pizza Hut was the first of the segment’s big three companies to introduce a smartphone application for ordering. Its iPhone app has been downloaded more than 3 million times.

Domino’s not only has added its popular Pizza Tracker functionality to its smartphone app, but also unveiled earlier this year its Times Square Tracker, which streams in real time the Twitter comments and complaints directed at the chain on a billboard in the heart of New York City.

In addition to its marketing partnership with the NFL and its official sponsorship of 14 NFL teams, Papa John’s formerly was the title sponsor of the college football PapaJohns.com Bowl. The company still retains naming rights for Papa John’s Cardinal Stadium at the University of Louisville.