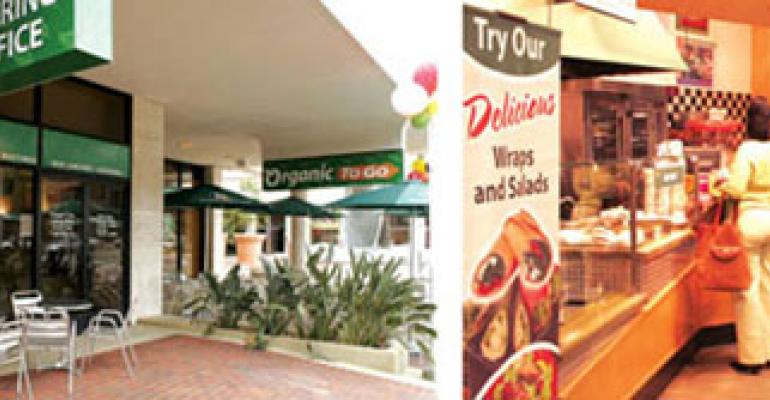 Most of Organic To Go’s founders previously had owned another company together, a vitamin and supplements concern that they sold to an online pharmacy company. That sale process involved a string of boardroom meetings and catered lunches.

Perhaps those wheeled-in lunches looked and tasted okay, but they were not reliably made from what the founders term “clean food”—organically grown, or free of pesticides and chemicals.

“So in this large corporate environment, we said wouldn’t it be fun if there were organic and natural versions of these meals?” says Wendy Tenenberg, an Organic to Go founder and its vice president of communications. “Wouldn’t it be great to eat at a meeting with 25 people and have something that fit your goals for lifestyle and health?”

Thus came the idea for what became Organic to Go, a rapidly growing fast-casual chain of cafes and catering outfits for folks who typically eat this “clean food” at home and want it for their work lives, too.

Since opening its doors in 2004, the Seattle-based company has obtained USDA organic certification as a retailer and took on investment dollars so it could grow quickly. Now called Organic To Go Food Corp., the company completed a reverse merger and went public in 2007.

Organic To Go is present in more than 170 locations—including 34 of its own branded cafes—which also provide catering services—more than 120 wholesale locations, 14 universities and 11 locations at Los Angeles International Airport.

Brown says the company seeks to expand into areas where people tend to have a higher level of education and are more desirous of “clean food,” thus it has targeted heavily corporate metro areas, colleges, airports and hospitals.

“I think he’s pretty much first in this particular business model,” says Bob Scow-croft, executive director of the Organic Farming Research Foundation, speaking of Brown and the company he leads.

While Scowcroft calls Organic To Go an “exciting concept,” he warns that there likely will be sourcing challenges for ingredients.

“Generally, there has been volatility in organic prices in the last few years,” Scowcroft says. “Demand for organic outstrips supply. They are going to have to build relationships over a number of years to secure a steady supply at a very economical price. It is very possible to do that, but it takes time.”

Brown says the availability of organic ingredients today compared with 2004 is far greater, enabling the company to expand beyond its initial markets in the Seattle area and Southern California.

In June, the first non-West Coast locations opened in metro Washington, D.C. Organic To Go acquired a locally based cafe chain and converted it into four of its own outlets. Then in July it acquired and rebranded a fifth location.

From the start, the acquisition and conversion of existing businesses has been Organic To Go’s way of leapfrogging past some of the usual expansion hurdles. “Rather than going through the process of finding commercial real estate and building clientele from scratch, we looked at the opportunity to aggregate some of these smaller mom-and-pop businesses,” Tenenberg says.

In some cases, the principals from the bought-out local cafes have become part of the Organic To Go team. For example, the company acquired the Brother’s Restaurant & Deli chain, a popular San Diego company headed by three brothers for over 20 years. All three Kashou brothers are still in the thick of Organic To Go’s San Diego operations.

Tenenberg says the company aims to become profitable in the fourth quarter of 2008.

Brown is a longtime entrepreneur who has founded clothing companies, more than one vitamin and supplements company, and was involved with a New Zealand distributor of products like hormone-free salmon and edamame.

Organic To Go is his first direct foray into foodservice, not counting some childhood experience in the business. His parents ran a Jewish deli for 40 years in his native Pittsburgh.

Brown has been eating organic and natural food since the mid-1970s and has been gratified at the increasing popularity of these foods. By 2004, as Brown and his business partners pondered a new venture, they took notice of things like record-level consumption of organic milk.

In the summer of that year, Brown flew around the United States looking at “nonconventional” food retailers—delis and restaurants that sold the kind of food he and his partners envisioned for a potential new establishment. He even went to Europe.

By the end of August that year, he says he decided that if the partners could create a company that delivered “clean” American cuisine, the things that people ate every day—coffee, roast turkey sandwiches, egg and potato breakfasts and burritos—that they had a real shot at success.

By November, the first Organic to Go kitchen and a 600 square-foot cafe opened, “and we learned that people liked our ideas,” Brown says.

He says that his parents, who ran the deli for all those years, are gone. However, he says, they certainly would get a “tremendous chuckle” out of his return to the family’s old line of business.