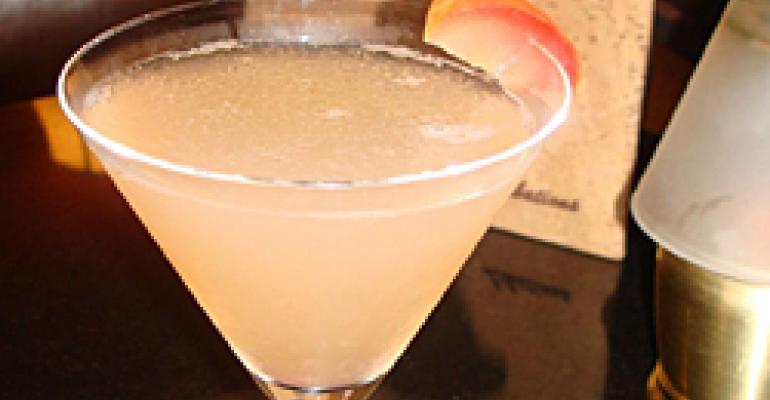 Operators warm up to winter with heartier cocktails

Operators around the country are welcoming winter with spirits-driven seasonal cocktails distinct from the light, fruit-forward tipples fashioned in balmier times. These creations tend to showcase headier liquors, flavorful fall and winter fruits and sweet, aromatic spices, all selected for their warming effect on patrons.

“In spring and summer, you’re looking at fruits and berries and thinking of all the flavor combinations,” said Dustin Dickson, bar manager of the Heathman Restaurant & Bar in Portland, Ore. “Now it’s more about working with the flavors that are already in the bottles.”

“For lack of a better term, drinks become a little boozier in the fall and winter,” said Rich Pitcher, beverage director of Gotham Bar & Grill in New York City. There, the spirits come to the fore, and seasonal fruits play a supporting role. An example is the pear puree that rounds out the flavor of The Bartlett, a drink that makes its major statement with Charbay Green Tea Vodka, sage and Tasmanian leatherwood honey. Similarly, the Honey Crisp Apple Cocktail is a remix of the popular apple martini based on an infusion of craft-distilled Heart of the Hudson vodka and honey crisp apples, with calvados, spiced syrup and a dried apple chip for garnish. Ditto for the drink named 25 in honor of Gotham’s silver anniversary this year, a spirits-forward riff on the classic Manhattan made with bourbon, French blanc and rouge vermouths and ginger liqueur.

However, not everyone believes that a liberal pour is essential for a good winter cocktail. At the modern Austrian restaurant Wallse in New York, one of the four operations in chef-owner Kurt Gutenbrunner’s restaurant group there, creations like the Fig Manhattan, made with fig-infused bourbon and fig jam, the Kumquat Caipirinha, with rum-muddled kumquats, and the Blood Orange Cosmo, with fresh blood orange puree and citrus vodka, are each marked by a prominent seasonal fruit flavor and a restrained hand with the bottle.

“We’re not using too much spirits, because we want you to enjoy your dinner,” said beverage director Leo Schneemann. He also uses sugar and spices in moderation to avoid blunting guests’ palates at the start of the meal.

Back at the Heathman bar, the seasonal shift to darker spirits is well under way. “I order twice as much bourbon and half as much vodka now as I did in summer, and I sell a lot more Manhattans,” noted Dickson.

Apopular drink of the season is Jay’s Famous Hot Buttered Rum, a tweaking of the classic hot cocktail made with a flavoring mix of butter, granulated and brown sugar, cinnamon, nutmeg and cloves creamed together with vanilla ice cream and chilled into a paste. A tablespoon of the mix stirred with spiced rum and hot water is all it takes to produce a steaming, comforting cup.

“I made my first batch of rum mix a couple weeks ago because people were asking for it already,” said Dickson.

Tequila is the spirit of choice for winter drinks at Copa d’Oro, a Santa Monica, Calif., bar known for its fresh, local and seasonal mixology, reported head barman Vincenzo Marianella. He plans to use 100-percent blue agave tequila in all three age grades — blanco, reposado and anejo — in drinks with tangerines, blood oranges and grapefruits. The pungent Mexican distillate lends libations a special character. “I use blanco for citrus cocktails, reposado for drinks with Champagne and anejo to add aromatics to an Old Fashioned- or Manhattan-style drink,” said Marianella.

On blustery Chicago days, shoppers duck out of Michigan Avenue stores and into The Bar of the InterContinental Chicago hotel for a restorative Pumpkin Pie Martini. What sets this drink apart from similar martinis is a base of slowly roasted fresh pumpkin made in house, according to food and beverage operations manager Kingson Kok. The cooked pumpkin is pureed and blended with vanilla-flavored bourbon, crème de cacao and cream.

“You can really taste the freshness of the pumpkin,” said Kok. Another seasonal hit is the Pear-a-Dise in Autumn Martini, which melds Absolut and Absolut Pear vodkas with muddled plum, honey syrup and lemon juice.

At the fine-dining spot one sixtyblue, one of the Michael Jordan Restaurants in Chicago, the Persimmon Spice cocktail sports layers of flavors. It calls for tart persimmons muddled with aged rum and cinnamon schnapps, plus honey crisp apple juice for sweetening. On the whimsical side is the Grinch, a green martini with vanilla vodka, white chocolate liqueur and pistachio syrup.