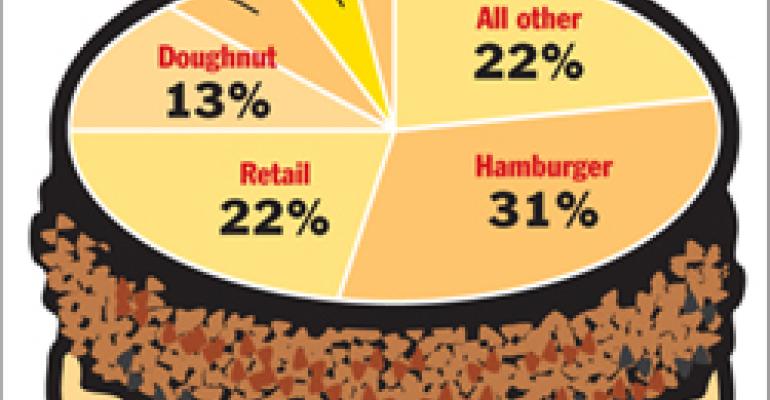 Breakfast, long extolled as the best way to jump-start the day, is actually gaining ground as a great way for operators to keep money coming in during later hours, too.

Servings of breakfast foods are up 64 percent over the past five years, Riggs noted. In addition, NPD data reveals that consumers’ ordering patterns at major family-dining chains that serve breakfast all day indicate there is interest in breakfast foods beyond the morning meal.

During the year ended November 2006, only 7 percent of servings of breakfast foods at quick-service restaurants were consumed during non-morning meal times. The low consumption is due largely to the fact that few quick-service chains offer breakfast items past 11 a.m. and even fewer offer all-day breakfast, as do many of their family-style competitors, industry observers say.

“There’s an opportunity for [quick-service] operators to get more visits from existing customers or even others,” Riggs said of offering breakfast foods during non-morning meal hours.

While consumers looking for a breakfast fix at quick-service restaurants after the morning mealtime have limited options, the NPD data reveal that, when breakfast items are available, consumers often order them, particularly during lunch.

One of the few quick-service chains that offers breakfast all day is San Diego-based Jack in the Box. The burger chain has been serving all-day breakfast since the chain’s inception more than 50 years ago.

“Breakfast has always been a strong daypart for Jack in the Box, and it’s an increasing daypart,” said Terri Funk Graham, the chain’s vice president and chief marketing officer.

Graham attributes that growth to the lifestyles of today’s consumers. To keep up with the demand, the chain recently introduced the Bacon Breakfast Jack, a twist on the chain’s classic Breakfast Jack sandwich, which traditionally comes with ham, and two new buttermilk biscuit sandwiches—the Bacon, Egg and Cheese, and the Sausage, Egg and Cheese.

“It’s all about grab and go,” Riggs said of the breakfast sandwich’s popularity.

When it comes to eating off-hour breakfast, consumers order from a variety of quick-service categories. The categories with the largest share of non-morning meal breakfast are Hamburger, with 31 percent; Retail, with 22 percent; and Doughnut, with 13 percent. QSR Varied Menu, Deli, Other Sandwich and All Other combined have just 34 percent of the market share.

No matter what breakfast food they eat or where they order it, the consumers driving interest in breakfast foods beyond breakfast time are men, teens and young adults, Riggs said.

The growth of breakfast food seems to have been a wake-up call for some quick-service operators. Several major chains are trying to keep loyal consumers coming back for breakfast as well as trying to lure in new consumers by doing everything from expanding existing offerings, adding morning menus and even considering serving breakfast all day.

Among the chains adding new menu items and making them available throughout the day is Starbucks Corp., which recently rolled out a line of egg-based breakfast sandwiches served on English muffins as well as one on a toasted bagel. Burger King also recently launched as a permanent all-day menu item Cheesy Tots, bite-sized, cheese-stuffed potatoes.

Other chains, such as Wendy’s, are adding morning menus. Last year Wendy’s began testing a new breakfast menu, featuring a combination of signature items, familiar breakfast options and value offerings. The No. 3 burger chain plans to expand breakfast to 50 percent of its 6,000 U.S. stores by the end of 2008, a spokesman said. Taco Bell also announced late last year that it planned to expand a test of breakfast in select markets this year.

About three years ago, Carpinteria, Calif.-based CKE Restaurants began putting a new focus on breakfast at its Carl’s Jr. chain by adding more breakfast items to the morning menu.

“For many years we neglected the breakfast daypart in favor of focusing energy on lunch and dinner,” said Brad Haley, executive vice president of marketing for the Hardee’s and Carl’s Jr. chains.

Recent additions include the Steak & Egg Burrito, the Loaded Breakfast Burrito and the Bacon & Egg Burrito, all part of a new line of breakfast burritos with freshly made salsa. Breakfast now accounts for 17 percent of the chain’s total day sales, up approximately 8 percent since 2004, Haley said.

Breakfast has been big for McDonald’s Corp. since the chain first introduced the Egg McMuffin back in 1973. The morning meal currently accounts for a quarter of the chain’s overall U.S. business and generated a whopping $6.5 billion in sales in 2006 for the No. 1 burger chain.

Breakfast could become even more important to McDonald’s if and when the chain begins offering breakfast all day. While there has been much talk about the possibility of the burger behemoth extending breakfast, if it does happen it wouldn’t necessarily be anytime soon, said McDonald’s spokeswoman Danya Proud.

“It has to be operationally feasible,” Proud said.

While there’s no guarantee that consumers will be able to get their Egg McMuffin or McGriddle for lunch or dinner in the near future, they will soon have more choices in the morning. To keep consumers waking up with its breakfast, the chain is introducing Cinnamelts, the center part of a cinnamon bun with a sweet sugar glaze. It also plans to make getting a cup of its signature coffee faster and easier, especially at the drive-thru, by giving consumers the option to request crewmembers add sugar or creamer in advance. Both the Cinnamelts and the customized coffee are currently in select markets, but will be available nationwide in mid-March. The chain is also testing specialty coffee and iced tea.

When it comes to getting breakfast any time of the day or night, consumers may have to continue to turn to family-style chains such as Denny’s, Shoney’s and Bob Evans—at least for now. Many chains say that all-day breakfast simply isn’t operationally feasible or that the consumer demand just isn’t great enough at this time.

“People are looking to understand even more so they too can capitalize on it,” Riggs said of why many quick-service operators are slow to expand breakfast.