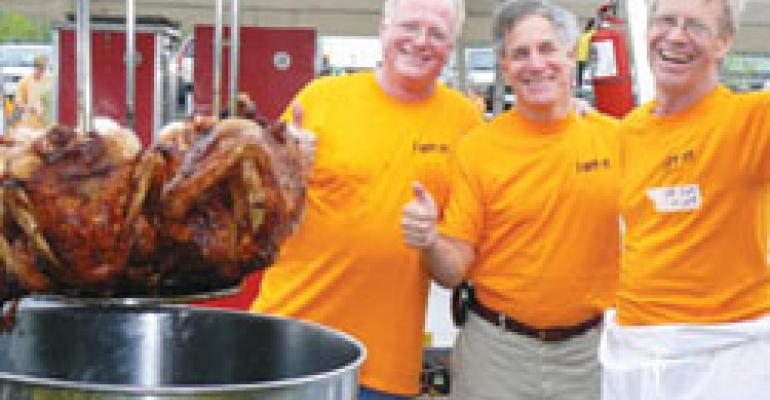 Consumers generally appreciate whimsical, election-theme promotions, but the Daily Grill chain was forced to cancel its new “Cast Your Vote Now” campaign abruptly after hearing from another constituency: the chain’s employees.

“They said that if people go out to eat, they don’t want politics thrown in their face,” said Philip Gay, chief executive of parent company Grill Concepts Inc.

Many chains conducted an election-theme promotion during the primaries, and more have jumped on the bandwagon for the Nov. 4 general election. Restaurant executives say the key to making these promotions successful is to keep them lighthearted and avoid any appearance of partisanship, which Gay thought he had done with the Daily Grill promotion.

“I like to have a good laugh, and we thought it was done tongue-in-cheek, just to have some fun,” he said. “They always say food and politics shouldn’t mix, but I was shocked by the outpouring from some of our own team members.”

Daily Grill, based in Woodland Hills, Calif., has 24 units in eight states, and most of the complaints came from branches in Northern California, Gay said.

The promotion was structured like other election-theme efforts in which diners order the meal associated with their candidate. Daily Grill’s $25.95 election menu featured filet mignon for backers of Sen. John McCain, and pan-seared salmon for Sen. Barack Obama supporters.

Daily Grill tried very hard to ensure both dishes were equally attractive and even considered serving the same meal, but altered slightly to give both Democrats and Republicans a choice.

When the process grew “too convoluted,” Gay said, the chain decided to wage a steak-versus-salmon election. That’s what some employees didn’t like.

“They were worried that guests would say, ‘If I really like steak, but I’m anti-McCain, then I’m not going to order the steak,’” Gay said, adding that employees didn’t see the humor in the promotion.

If an election-theme promotion is meant to be humorous, the humor must be applied equally to both parties, said chef Steve Chiappetti of Chicago’s Viand restaurant. Since Labor Day, Viand has been offering two special three-course meals for $20.08: The Democrat and The Republican.

One of two entrée options on The Democrat is “Al Gore’s Save the Salmon.” An appetizer on The Republican is called “Nixon’s Covered Up Soup with Puff Pastry.”

“We made fun of both parties,” Chiappetti said.

The idea behind the menu was to have a little fun and “maybe promote conversation, maybe not,” he said.

Both menus have sold extremely well, Chiappetti said. Typical of Chicago, many more customers have chosen The Democrat than The Republican.

Chiappetti has not heard any customers complain about the menus, which he says are innovative seasonal menus and not a political statement.

Complaints about an election-theme promotion, however, are not always unwelcome.

Ray, wearing an “It’s not them, it’s us” T-shirt at the events, talked about how citizens are more important than politicians. He explained that some of his customers complained, saying, “How can you use your business franchise in this way?” and vowed that they never would eat at Common Man restaurants again.

Burger King Corp., based in Miami, also is encouraging customers to vote and share their political views, but it’s taking a less serious approach, using a “Poll-A-Rizer” to chart results of an online survey showing where the quick-service chain’s consumers fall on the political spectrum.

The campaign includes a link to a voter registration website, a national TV spot and a social-networking aspect, with Facebook and MySpace applications allowing users to state their political opinions and compare views with those of friends.

But Wheat Ridge, Colo.-based Qdoba Mexican Grill, with more than 400 units in 39 states, has already figured that out. Its first election-theme promotion, based on scientific research, attributes different common “Q-dentities,” or food personalities, to the candidates.

Obama is said to have a taco salad personality, while McCain has a nachos personality. Sen. Joe Biden is classified as a quesadilla kind of guy. Alaska Gov. Sarah Palin is chips and salsa.

A microsite at encourages visitors to take a quiz to determine their own Q-dentities and then asks them to vote for a candidate and a campaign issue that is most important to them.

Voters and Qdoba customers also can join social-network constituencies such as “Burritos for McCain” and “Tacos for Obama.”

“We thought it would be a great way to engage consumers in the election,” said Doug Thielen, manager of nontraditional marketing and public relations for Qdoba. “Obviously we wanted to be very careful and sensitive to the nature of the campaign.”

Thielen added, “This in no way endorses any candidate.”

California Tortilla, a 37-unit fast-casual chain based in Rockville, Md., began using election-theme promotions during the 1996 race and now is urging customers to cast their ballots for either the McCain Burrito or the Obama Burrito.

The promotion may be lighthearted, but customers take it seriously, said chain co-founder Pam Felix.

In past elections, customers who preferred the ingredients of the opposition’s burrito refused to buy it, not wanting their votes going to the wrong candidate, she said. California Tortilla’s burrito balloting has accurately predicted the winners of congressional, presidential and gubernatorial elections, Felix said.

Presidential-election days are “our busiest days of the years,” with sales up 25 percent to 35 percent and no negative political fallout, she said.

“We’ve been doing it for so long and so tongue-in-cheek that we have not had a problem,” Felix said.