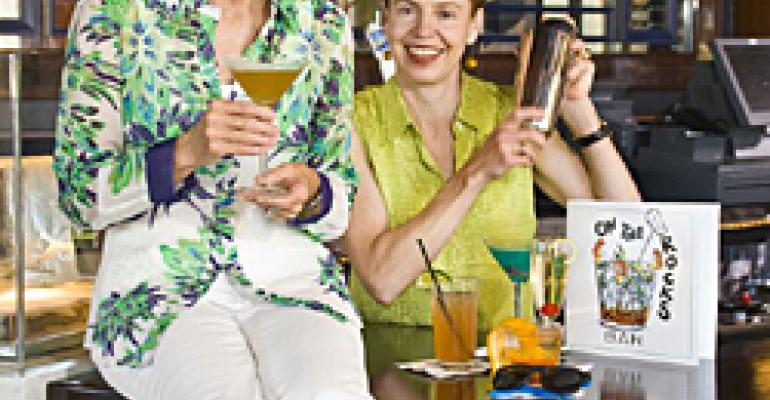 Smashing the stereotype of rum as fit mainly for mixing sweet-and-simple tropical drinks, some restaurant and bar operators are crafting it into serious cocktails and pouring it neat as an eminently sippable spirit.

There's no denying that rum's association with exotic travel destinations and fun in the sun have helped sell oceans of daiquiris and pina coladas. But in a day when customers increasingly are interested in sophisticated, hand-crafted cocktails, those simplistic images actually may be limiting their interest in better rums. "People tend to pigeonhole it," said H. Joseph Ehrmann, owner-operator of Elixir, a neighborhood bar in San Francisco with a spirits collection that includes 30 fine rums. "They think, 'I only drink rum on the beach or on vacation.' "

To help the public look beyond the umbrella drink, Ehrmann came up with Autumnal Punch, a creation he said was inspired by the account of classic punches in "Imbibe!," a history of American mixology by David Wondrich. The decidedly non-tropical libation is made from Rhum Clement VSOP rum, pear liqueur, fresh lemon juice, allspice liqueur and orgeat syrup, shaken and strained over ice and garnished with yellow raisins, priced at $10.

As Wondrich's book recounts, punch was the predominant mixed drink in the nation's watering holes from the 1670s to the 1850s. Saloons kept a big bowl of strong spirits, citrus, sugar, water and spices upon the bar to parcel out to patrons by the ladleful.

"I like that communal aspect," Ehrmann said. He is planning a weekly Punch Happy Hour at Elixir that will feature old-fashioned and newfangled recipes. "We would basically make up a batch of rum punch and serve it until it is gone," he said. "I even went out and bought the punch bowl and cups."

Well-made cocktails — many of them based on rum — and sophisticated atmosphere are the hallmarks of Commander's Palace and The On the Rocks Bar in Destin, Fla., according to Ti Adelaide Martin, co-proprietor of the new establishment in the Florida panhandle as well as the legendary original Commander's in New Orleans. "What it's all about is making a perfect daiquiri," said Martin. "It's my favorite drink when it's done right, which it almost never is. It's just rum, lime and sugar — fresh lime and not too much sugar."

Other specialties include Papa Doble ($9.50), an Ernest Hemingway favorite, made with light rum, maraschino liqueur, lime and grapefruit juice, the simple but flavorful Dark and Stormy ($7.50), made with dark rum and ginger beer, and the Royal Bermuda Yacht Club ($9.75), a combo of Mt. Gay Rum, fresh lime juice, Falernum syrup and orange liqueur. "These are not overly sweet kiddie drinks," said Martin. "They don't taste like dessert or a fruit bomb."

Headlining the sippable choices is the rare British Royal Navy Imperial Rum, priced at $80 per shot. It's from the stores of spirits that the British Navy parceled out to its sailors as a daily "tot" or ration, a custom that lasted some 300 years until 1970. "When I first cracked open the demijohn, I got an intense whiff of cocoa and chocolate and coffee," said Perry. "It's a rum that stays with you, so chewy and rich."