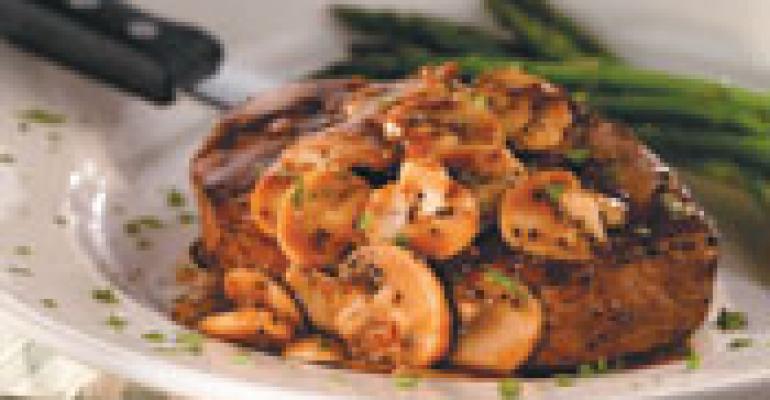 NASHVILLE Tenn. The O'Charley's casual-dining chain is touting steak in a limited-time promotion that runs through Dec. 30.

The All Things Steak menu lists six beef options, ranging from a Roast Beef Ciabatta Sandwich for $8.99 to a 12-ounce rib-eye for $16.99. Other items include South American Herb Steak, which is sliced and topped with chimichurri sauce and served with soup or salad and seasoned potatoes for $13.99; a Shredded Beef Quesadilla, $8.99; a 10-ounce Burgundy Mushroom Sirloin served with asparagus and a choice of soup or salad, $14.99; and Prime Rib Pasta, a mix of penne, sliced price rib, bacon, asparagus, mushrooms and a sun-dried tomato Alfredo sauce, served with a Cajun horseradish sauce, $12.99.

Applebee’s, the casual-dining segment’s largest player, is also promoting steak this fall, and T.G.I. Friday’s is featuring Argentinean Rubbed Flat Iron Steak as one of the entrees on its new 3 Course Menu.

O'Charley's Inc., based here, operates or franchises 239 namesake restaurants in 19 states. The company's other holdings include the 114-unit Ninety Nine Restaurant chain, which operates in eight states, and the Stoney River Legendary Steaks concept, which has 10 units in six states.