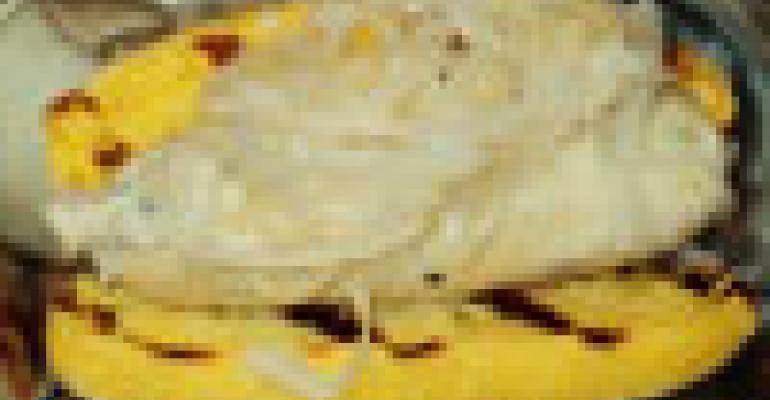 Even as New York City remained in the grip of winter, restaurant chefs participating in the Careers through Culinary Arts Program, or C-CAP, event gave attendees an early taste of some selections that will appear on their spring menus.

The annual benefit for C-CAP, which fosters underprivileged students’ pursuit of foodservice careers, is supported by many of the city’s leading restaurants and features an early look at selections chefs are preparing for their spring menus.

Italian food will continue to exert a strong influence over the New York dining scene, but other areas of the Mediterranean, especially Spain, also will hold some sway. In addition, vegetables will continue their steady trek into the center-of-the-plate.

Meanwhile, down-home foods also will be getting the upscale treatment at New York restaurants.

For example, Ben Pollinger, executive chef of Oceana, showcased what he jokingly calls “dirty water dogs” — sausages made of halibut and striped bass, seasoned with onion, basil and parsley, stuffed in a casing, poached and served in mustard buns.

Corned beef was simulated and elevated by the team at Craft, which cured wagyu brisket and served it with sauerkraut and grainy mustard.

Jason Wiener, chef of Almond, played into New Yorkers’ love for both Italian food and burgers by dishing up braised pancetta sliders with persimmon mostarda.

Brandon Kida, the chef at Asiate, served his version of fondue — melted foie gras in a little bowl served with a gougère, prosciutto and pineapple, all on a skewer for dipping.

Philippe Bertineau, chef of Benoit, served what looked like mini-crab cakes but in fact were crispy breaded pork trotters shaped into small patties and topped with tartar sauce.

Eastern Mediterranean influence could be seen in the spicy chickpea salad with faro tabbouleh at Telepan, and the pomegranate-glazed salmon with hummus and curry-balsamic vinaigrette from Extra Virgin Restaurant.

From Spain was Yuhi Fujinaga’s ruby red shrimp pintxo from Bar Basque, accompanied by an eyedropper skewer of chile oil.

CORRECTION: An earlier version said the pomegranate-glazed salmon was made from a curry-balsamic vinaigrette "from extra virgin olive oil". The dish is actually "from Extra Virgin Restaurant."