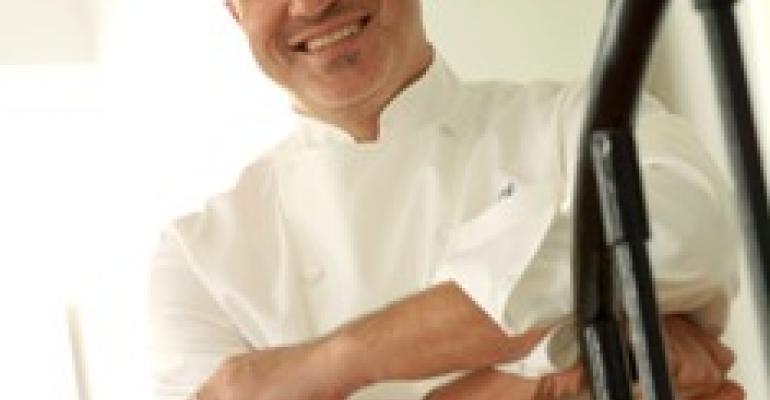 Chef-owner and culinary star named to MenuMasters Hall of Fame

Tom Colicchio has been named the latest inductee into the MenuMasters Hall of Fame, joining the ranks of other leaders in menu development, including Jacques Pépin, Emeril Lagasse, Wolfgang Puck and Paul Prudhomme.

The chef-owner of the Craft and ’wichcraft restaurants and head judge of the hit Bravo TV show Top Chef has been selected for, among other things, being a pioneer in bridging the gap between fine dining and fast food.

His sandwich chain ’wichcraft was an early example of the burgeoning “fast fine” segment, featuring top quality food in a casual setting.

“Tom Colicchio realized earlier than many other fine-dining chefs that excellent food can and should be available for any occasion,” says Bret Thorn, senior food editor at Nation’s Restaurant News. “By taking ingredients that were similar to what he would have used at upscale restaurants like Craft or Gramercy Tavern and putting them in sandwiches at ‘wichcraft, he helped pave the way for others to elevate casual meals into memorable culinary experiences.”

Colicchio has cooked at a number of top fine-dining restaurants in New York City, including Barry Wine’s Quilted Giraffe, Alfred Portale’s Gotham Bar & Grill, and Thomas Keller’s Rakel, before becoming executive chef of New York culinary landmark Mondrian. There he was awarded three stars by The New York Times and was named one of Food & Wine magazine’s 10 “Best New Chefs” in 1991.

In 1994 Colicchio teamed up with restaurateur Danny Meyer to open Gramercy Tavern, where he got another three stars from The New York Times and won the James Beard Foundation award for best chef in New York in 2000.

He continued the pattern at Craft, which he opened in 2001 and got three more stars from the Times and the Beard Award for best new restaurant. He also was named “Chef of the Year” by Bon Appétit magazine in 2002.

Since then he has extended his franchise, opening the more casual Craftbar in New York and Los Angeles, Craftsteak in Las Vegas and Foxwoods, and additional Craft restaurants in Los Angeles and Dallas. In 2010 he opened Colicchio & Sons and Riverpark in New York.

He currently operates 14 ’wichcraft locations in New York City as well as locations in San Francisco and Las Vegas.

MenuMasters, which recognizes excellence in menu development, is sponsored by Ventura Foods. Colicchio and other winners — to be named in February — will be toasted during the National Restaurant Association Restaurant, Hotel-Motel Show in Chicago during a celebration at The Drake Hotel on May 21.