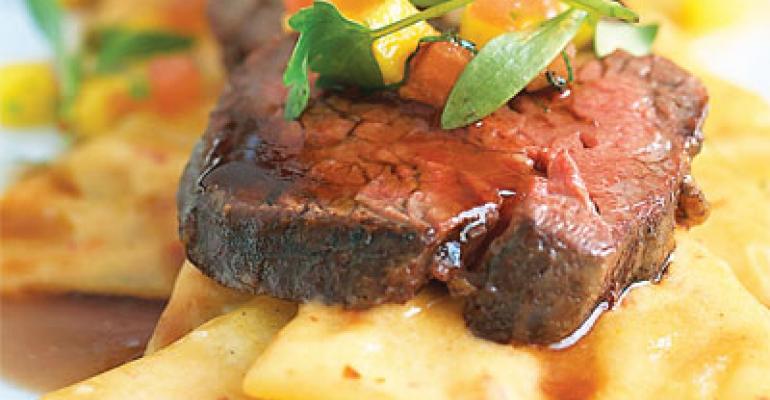 Kitchen equipment can add variety to a restaurant’s menu

Kitchen equipment is often key to the menu additions that draw variety-hungry customers to restaurants.

For example, Burger King’s flexible batch broiler, which can be programmed for the precise cooking times and temperatures of various items, enabled the launch of such ambitious new products as the Steakhouse XT burger and St. Louis-style ribs by the Miami-based quick-service giant. And Dunkin’ Donuts’ accelerated cooking oven, which works with forced hot air, microwave energy and radiant heat, helped them produce the flatbread sandwich menu that “absolutely was a game changer for us,” said Stan Frankenthaler, executive chef of Canton, Mass.-based Dunkin’ Brands.

Mr. Goodcents Subs & Pastas, a 100-unit quick-service chain based in De Soto, Kan., is reaping incremental sales with the successful rollouts of flatbread pizzas and toasted subs, both made possible by installing fast and easy-to-operate conveyor toasters in the past year.

The new individual-sized flatbread pizzas, which roll off the conveyor in less than two minutes, give the chain a leg up on competing sandwich players, said marketing director Eric Tadda. For their part, toasted subs satisfy a growing consumer preference for hot, toasted-to-order sandwiches.

Although the stores already used conventional ovens to bake sandwich bread, it was necessary to add faster ovens to execute the new items, Tadda said. “Otherwise the timing wouldn’t have worked, and the quality wouldn’t be what we need,” he noted.
The conventional conveyor toaster provides the desired results at a price sandwich shop operators can afford, around $3,000 each. The conveyor toaster was chosen over other ovens with more advanced digital technology but much heftier price tags.

When contemporary American restaurant one sixtyblue in Chicago closed for two weeks last August to remodel its bar, executive chef Michael McDonald made the most of the down time. He convinced Cornerstone Restaurant Group, which owns seven dining concepts in the Chicago area, to install a piece of equipment he had long coveted: a wood-burning grill.

With the grill, McDonald has added three new premium steaks, well seared and scented with hardwood smoke, that particularly appeal to the many fans of professional hockey and basketball who dine there on game nights at the nearby United Center.

“A lot of those guys just want a nice piece of meat and a beer or glass of wine,” said McDonald.

As a category, the steaks now make up as much as 25 percent of sales, McDonald estimated. Strong sales and the positive guest comments justify the $25,000 tab for the grill and ventilation system, he said.

Avec, a Mediterranean restaurant in Chicago, also closed temporarily last summer, but for unexpected reasons. A fire in the building caused a two-month shuttering for repairs. Executive chef-partner Paul Kahan and chef de cuisine Koren Grieveson used the opportunity to install a new high-powered six-burner stove and plancha that had been planned for some time.

The plancha, a polished metal surface that stays hot throughout the shift, not only cooks more quickly than a sauté pan, it allows new cooking riffs, such as seared whole fish.

“It can give food a great charred flavor,” said Grieveson.