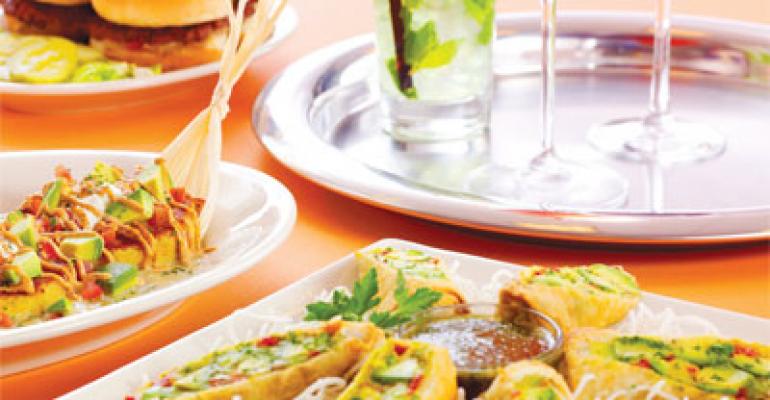 A menu full of choices keeps dissenting diners in the restaurant

When it comes to deciding where to go out to eat, the majority rarely rules.
This is what California Pizza Kitchen’s co-founders had in mind years ago when they began expanding the casual-dining concept’s menu beyond its signature wood-fired pizzas.

“We were trying to give people choices other than pizza. If four people are going to dinner, and one doesn’t want pizza … that’s the veto factor,” said Larry Flax, co-founder and co-chief executive of the Los Angeles-based chain. “One can influence four.”
The veto factor is a powerful reason for a restaurant to offer variety on the menu. Providing a diverse selection of dishes to appeal to a broad spectrum of eaters can result in satisfying sales.

Adding variety to the menu requires a restaurant to have a keen understanding of its customers as well as its own limitations — from what guests expect from the brand to what its kitchen is capable of executing, he said. The economics of new dishes and how they will affect ordering patterns are other critical considerations.

“Anyone who tells you menu management is easy hasn’t done it,” Lombardi said.

For a restaurant looking to build sales by diversifying its menu, a good place to start is by scrutinizing what the current menu is lacking — why core customers are not coming more frequently and why others are not coming at all, Lombardi said

For California Pizza Kitchen, the solution was simple. If people didn’t want pizza, they weren’t going to go to California Pizza Kitchen. Flax said they began to diversify the menu at the concept’s original location by offering pasta and salads. Today, the 234-unit chain offers those items as well as sandwiches, seafood, soups, tacos, lettuce wraps and more.

Pizza remains popular, of course, but it no longer makes up the majority of orders, Flax said.

“While pizza is our middle name, what people want is variety,” he said.

That same philosophy drove menu development at The Cheesecake Factory, a 149-unit brand known for its wide selection of over 200 menu items. Mark Mears, senior vice president and chief marketing officer of the Calabasas Hills, Calif.-based chain, said the menu grew to keep up with Americans’ evolving tastes.

“[Founder] David Overton wanted to make sure we were providing the right menu for what America wanted to eat,” Mears said. “He said there’s nothing that America wants to eat that can’t go on our menu.”

Very few restaurants can keep adding to the menu without overwhelming their kitchens, though, Lombardi said. When the kitchen is stretched past its limits, order accuracy, speed of service and food quality are bound to suffer.

“The more you change your menu, the more likely it is your kitchen design becomes inefficient,” he said.

The Cheesecake Factory’s kitchens are designed to keep up with its wide variety of dishes, which enables it to execute such a large menu, Lombardi said.

“One of the things that The Cheesecake Factory does extremely well is being able to produce that large of a menu while timing the meal,” he said. “The food all comes to the table at the same time.”

Mears said The Cheesecake Factory’s success in this area is a result of hard work and preparation to keep food quality high. For example, he noted that more than 90 sauces and dressings are made fresh in the restaurants each morning.

“We work very hard, and we don’t take short cuts,” he said.

“What you need to be careful to do is not continue expanding your menu while not cutting back on the low-margin, low-value, hard-to-produce items that are not contributing to customer satisfaction and restaurant profitability,” he said.

Restaurants are limited by more than their kitchens and costs when it comes to adding to their menus. They also face boundaries based on customer perceptions, Lombardi said. A seafood restaurant, for example, might make a fantastic steak, but customers might only think of the eatery as a place to order fish.

“You have to stay within the realm of what consumers believe your brand can do,” he said.

California Pizza Kitchen has worked hard over the years to convince customers that it offers more than just pizza, Flax said. Certain menu items have helped, such as the Baja fish tacos, which became a surprise hit at California Pizza Kitchen’s restaurants in the Midwest and on the East Coast, where fish tacos are less common than they are in the chain’s home base on the West Coast.

“One of our challenges and goals, every year, [is to] grow our customer base and get them to understand that we’re not just a pizza parlor,” Flax said. “We grew tons, for instance, just on the fish tacos.”

The Cheesecake Factory is known for its large entrée portions, which Mears said are designed to be shared or taken home as leftovers. More recently, the chain has had success with its “Small Plates and Snacks” menu, offering dishes that also are shareable, but at smaller portion sizes and lower price points.

The snacks menu offers a variety of dishes, from fried cheese and onion rings to chicken samosas, edamame and Vietnamese tacos, which Mears said keeps customers who like to try new things coming back to the restaurants.

“Some people have a craving for a certain dish and order it every time. Others view the menu as a culinary adventure and want to try something new every time they come in,” he said. “Given our menu, they won’t run out of choices any time soon.”

Ultimately, a successful menu will keep a restaurant’s loyal customers satisfied while at the same time making them hungry to come back for more.

“Menu variety is not about the total number of items on the menu,” Lombardi said. “It’s having four or five things that the customer is having trouble deciding between.”