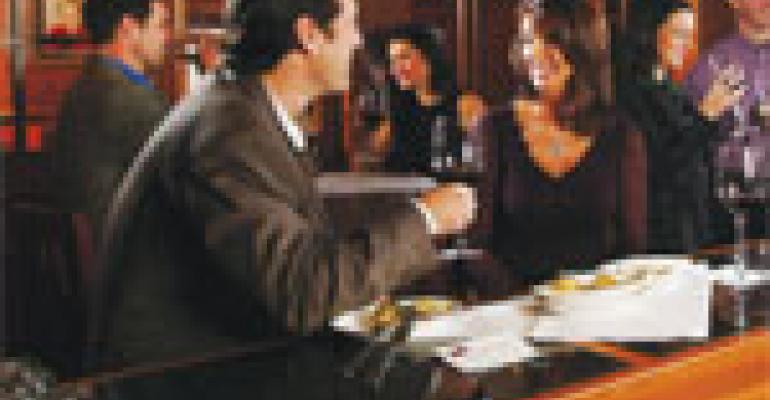 Since the late 1800s, when refrigerated railroad cars made it possible for Midwest ranchers to ship meat eastward, America’s love affair with steak has flourished. Today, consumers clamor for steak when they are celebrating special occasions, closing business deals or looking for a well-earned indulgence, and an ever-expanding flank of steakhouses stands ready to cater to those carnivorous desires at many price points.

While total U.S. beef consumption has grown only slightly in the recent past, beef’s popularity remains steadfast—despite price hikes and health-related scares, like mad cow disease and controversial reports linking red-meat consumption to increased rates of heart disease and cancer.

In a survey conducted last October by the National Restaurant Association, chefs gave a resounding thumbs-up to the staying power of beef. Of 1,282 chefs, all members of the American Culinary Federation, 33 percent ranked beef as “hot” and 55 percent ranked beef as a “perennial favorite.” Only 12 percent said beef was “passé.”

“[Steakhouses have] been going on forever,” says hospitality consultant David Shinney of DCS Associates LLC in Boston, who helped to open the high-end Grill 23 & Bar steakhouse, also in Boston, some 25 years ago. “Every time you think the market is saturated, another one opens. But this has been going on for years.”

He points to Peter Luger Steak House, a Brooklyn, N.Y., institution since 1887 that, as Shinney puts it, gives birth to competition as “the apostles go out and spawn their own.”

“They create a larger critical mass with each addition and the mass survives and prospers,” he says.

Competition has never been fiercer, yet the segment continues to grow.

“Steak is the common denominator for our celebrations and business meals,” Besh says. “We love to splurge.”

The average check at Besh Steakhouse is about $62, he says. Some steak prices approach that figure on his menu—the 30-day aged Prime New York strip is listed at $58—but many customers “will just come in and order a couple appetizers and a filet,” he says.

Today’s diners fortunately are much more astute about beef, he says.

“Steak is not cheap,” he says. “Food cost issues are the big challenge. You want to be seen as a value.… Yet those that dine at steakhouses frequently are not shocked by the price. Big business deals are done over a steak, and when you’re splurging, you think less about cost. There is more wealth in our country today than ever before, and the success of the steakhouse is because of that.” Craig Miller, chairman, president and chief executive of 118-unit Ruth’s Chris Steak House Inc., based in Heathrow, Fla., agrees that people love steak. Although Ruth’s Chris recently revised its sales outlook for 2007 downward from a gain of 0.5 percent to 1.5 percent to flat, and fourth-quarter sales declined due to “pressures from the macro environment” that reduced customer traffic and “softened” the average check, Miller has faith in people’s love of steak. “

Most restaurateurs are cautious [about 2008],” he says. “We’re seeing some shift around in buying. I’m generally optimistic, but we’re cautious in our same-store sales expectations.”

With the purchase of 19 upscale seafood restaurants and three steakhouses from Cameron Mitchell Restaurants LLC for $94 million, Ruth’s Chris will be better balanced, Miller says, noting that he still expects the steakhouse business to grow.

“We opened 18 restaurants in 2007, and it will be similar this year,” he says. “We’re going into Aruba and developing Panama and Nassau.”

He adds that customers “come for our great Prime steaks. It’s a mini vacation with relief from daily pressures, a special treat. They kick back and use it as part of their enjoyment of life.”

But, he notes, families with incomes of $25,000 to $75,000 are in “a short-term squeeze, and it’s crimped their dining out frequently or caused a shift. I think it’s a temporary adjustment. I don’t think America’s love affair with beef is going to go away any time soon.”

To make sure it doesn’t, many chains are exploring new avenues, such as Ruth’s Chris’ limited lunch service in some markets. Chicago-based Morton’s is reaching out to younger customers with a new high-energy bar concept, and Patina Restaurant Group, the new owner of the Smith & Wollensky chain, is reportedly making menu changes.

All eyes are on the “aspirational diner,” who stretches the budget to frequent upscale steakhouses, says Dennis Lombardi, vice president of WD Partners in Columbus, Ohio. He cautions that lower-middle-income dining business could “dwindle” as a result of economic pressures. He says he also is concerned about a pullback in business dining, recalling that “in the last recession, a number of business customers reined in spending.”

Independent steakhouse operators say the key to surviving in difficult times is reinvesting.

“You have to treat it well and keep refreshing it,” says Ken Himmel, a New York-based developer who owns Grill 23 & Bar in Boston.

Grill 23’s sales for 2007 were about $16 million and should reach $21 million in 2008 following the expansion of the second floor, where a kitchen that serves private-dining business will double in size, he says.

“One of the biggest challenges is tinkering with the menu to create a broader American grill,” he says. “But 55 percent of our entrées are beef. It all comes from a single family-owned herd in California, purebred steers raised naturally and humanely.”

The biggest challenge for most steak-house players is rising costs.

“Everything is up this year, commodity prices and labor,” says Steve Hanson, president of New York’s B.R. Guest Restaurants, which operates Primehouse in Chicago and New York. “It’s very difficult on margins.”

At family-owned Palm Management Group in Washington, D.C., president Wally Ganzi believes that “with success comes competition” and to meet that challenge, the chain will become the first U.S.-based steakhouse group to expand to Europe this year with the opening of a unit in London.

The chain plans openings in Asia as well, Ganzi adds, and at home, will open in downtown New York.

The 82-year-old Palm has “continuously evolved our menu to meet the needs of our guests,” and today the new Palm fish menu “has doubled in sales since its introduction, increasing our seafood entrée sales from 7 [percent] to 14 percent.”

Like the higher-end players in the steak segment, the more moderately priced steak operators have made their own adjustments in 2007, dealing with a customer base hit hard by a host of factors.

At Tampa, Fla.-based Outback Steak-house, which celebrates its 20th anniversary this year, president Jeff Smith says the casual-dining chain has faced “a lot of headwinds” this past year, such as “gas prices, the mortgage situation, and uncertainty with the country’s leadership.”

However, Smith believes that “consumers will still head to what they know and trust.”