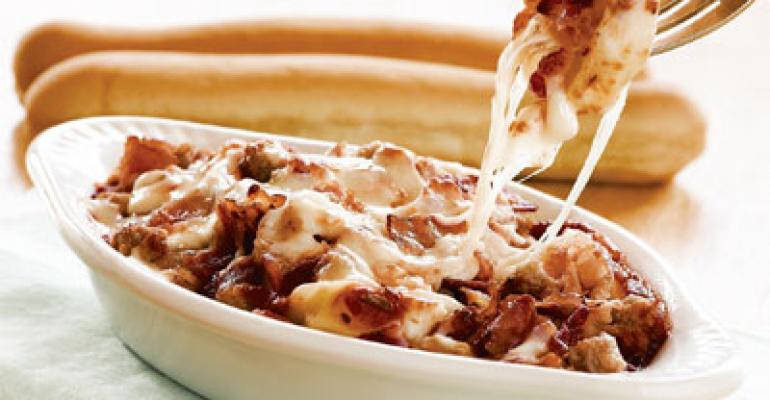 NRN 50: Economies of the scale

Concepts find expanding menus to include low-calorie dishes pays off

It was not so long ago restaurateurs were complaining that health-oriented selections barely registered with customers and did little but waste precious real estate on their menus.

These days, however, it seems as if operators can’t introduce new items quickly enough.

Over a recent month-long period, chains have weighed in with new dishes and combinations designed to appeal to calorie-counting consumers. Among them:

• Fazoli’s, the Lexington, Ky.-based Italian chain, introduced a line of Mini Bakes, limited-time-only pasta dishes that each contain 400 calories or fewer.
• Corner Bakery Cafe, the fast-casual chain in Dallas, expanded its “100 Under 600” program, which features more than 100 combinations of sandwiches, panini, salads or soups at less than 600 calories.
• Applebee’s Neighborhood Grill & Bar in Lenexa, Kan., added two dishes to its “Under 550 Calories” menu: a 7-ounce Signature Sirloin with Garlic Herb Shrimp and Teriyaki Pasta with chicken or shrimp.
• Dunkin’ Donuts in Canton, Mass., debuted two new varieties of its Wake-Up Wraps: an egg white with turkey sausage version and an egg white veggie, both with 150 calories.

Clearly, the tide is turning where health-centric menu offerings are concerned, and restaurateurs who avoid the nutrition issue today may be putting themselves at risk, observers caution. A recent study conducted by The NPD Group found that consumers finally are beginning to modify their eating habits. According to NPD, Americans are ordering fewer carbonated soft drinks, hot dogs, fried chicken and French fries, and opting instead for milk, grilled chicken and grilled chicken sandwiches, nonfried fish, fruit and yogurt.

Nor are calories the only flashpoint. As the nation’s obesity rate climbs, restaurateurs are faced with a growing chorus of critics targeting such food concerns as sodium, sugar, fats and trans fats.

Combine all of those with the federal menu-labeling regulations that are expected to be promulgated by the U.S. Food and Drug Administration this spring, and few restaurateurs will find themselves immune to the culinary changes sweeping the country.

“If you’re an operator, you have to be aware of the changing climate,” said Toby Strianese, a professor in the Hotel, Culinary Arts and Tourism Dept. at Schenectady County Community College in Schenectady, N.Y. “You can’t disregard this any longer.”

Frank Guidara, chief executive of Uno Chicago Grill in West Roxbury, Mass., agreed, saying: “A migration [toward more health-conscious dining] is taking place, as you’d expect. Consumers can’t be bombarded with this type of information without it having some impact.”

Although this shift presents challenges, it also offers opportunities to operators who address it head on. Guidara, Uno’s vice president of food and beverage and executive chef Chris Gatto, and the casual-dining chain’s R&D team have been working for several years to offer a balance of menu items.

“People can just order what they want to order,” he said.

While many operators currently are focused on calorie counts, sodium is looming as the next major food battleground. Guidara, who is a member of the Harvard School of Public Health Nutrition Round Table, said Uno executives met with New York City officials who are attempting to persuade food manufacturers and foodservice companies to lower the salt content in food.

“We found we had already exceeded their goals for 2012,” he said.

Guidara said that after sodium, he believes the hot button for health critics will be polyunsaturated fats.

“Flavor is everything,” Guidara said. “Even when [Uno] offers healthy choices, we still have a real commitment to maintaining flavor.”

At the same time, experts agree, there is no one-size-fits-all solution for offering healthful fare. Strianese said a Dinosaur Bar-B-Que restaurant recently opened in nearby Troy, N.Y., and observed, “There aren’t too many nutritional items on their menu.

“But I don’t know if healthy items would really fly in that type of place, anyway.”