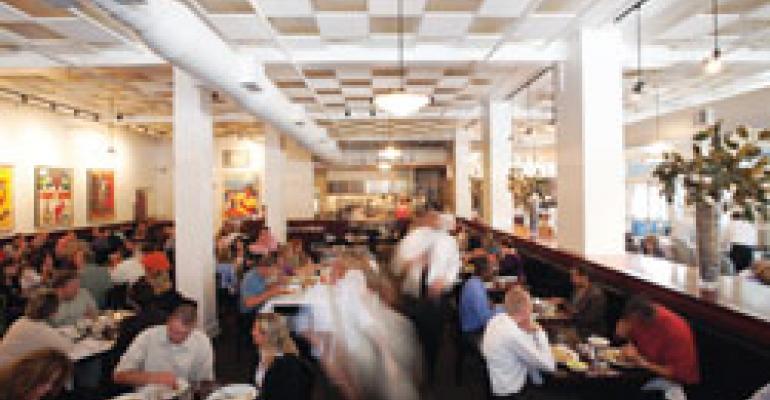 The NRN 50: Dressed down

The fine-dining business has experienced many twists and turns over its long history, but never more so than in recent years as restaurateurs have been forced to shift gears and move in new directions. The survivors retain the segment’s great tradition of offering high-quality food served in a skillful manner, but they now tend to be less fussy and tradition-bound.

From the heartland to New York City, where the average check at the 20 most expensive restaurants has risen 11.6 percent each year since 2001 to $143.06, according to the 2008 Zagat Survey, high-end dining is continuously redefined and reinvented.

Leading these changes, a new generation of culinary talent melds classical training with an adventuresome approach to flavors and ingredients. In the front-of-the-house, service often has segued from condescending to welcoming yet not chummy. Industry analysts credit a recognition of consumers’ desire for a warmer, more comfortable experience driving these shifts.

“The key turning point was after 9/11,” he says, “when a number of fine-dining restaurants began feeling the hurt of less consumer spending overall. Many ‘casualized’ themselves by redesigning their interiors to become more inviting, foregoing formal dress codes and even offering lower-priced menu items.

“Those that did this experienced a considerable amount of success and realized that they were riding the trend of consumers wanting quality food at reasonable prices in a comfortable and less-stuffy atmosphere.”

With the economy appearing to weaken again, he continues, “the fine-dining restaurants that casualize are in the best position to weather the storm.”

Hudson Riehle, senior vice president of research for the National Restaurant Association in Washington, D.C., sees another year of real but modest growth for the segment, which is expected to benefit from international travel to the United States and the appeal of the cheaper dollar.

“These people are an important component of the growth,” Riehle says, observing that operators face “a fundamentally different set of challenges than in previous years.”

He applauds the fine-dining segment’s ability to redefine itself during the nation’s last recessionary period, noting that operators were “quick to reposition themselves to adjust to the changed demographics” of their market.

A recent survey shows 24 percent of fine-dining operators view the economy as the top challenge this year, compared with 12 percent of operators in other segments.

“A good indicator of how they’ll adapt is to look at five or six years ago when they adjusted menus and [their] marketing mix,” Riehle says.

One of those chameleons is Stephan Pyles, chef-owner of his eponymous Dallas restaurant. Over the past 24 years he’s created 14 restaurants, each “more comfortable and relaxed while maintaining exacting standards in culinary quality,” he says.

Pyles’ newest restaurant offers a range of choices from a tapas and ceviche bar, a communal table, or a conventional table for two.

“It’s important to cast as wide a net as possible to keep the restaurant humming,” Pyles says.

While it once was sufficient just to be “a good chef in pleasant surroundings with professional service,” he says, today one must offer “a unique dining experience, at least a little different than any of the competitors.”

To keep up with escalating food and labor costs, other sources of revenue, such as the tapas and ceviche bar, cooking classes, private-dining areas and off-premise catering “need to be tapped,” he says.

Formality without condescension thrives at Arrows in Ogunquit, Maine, where James Beard Foundation award-winning chefs Clark Frasier and Mark Gaier see a need for “being true to our mission.”

The chefs offer fun event dinners and “Bistro Fridays” at Arrows in the off-season for the locals.

However, they find the new emphasis on casual dress at the high end “unbelievably unfortunate.”

“Part of going to a fine restaurant is dressing up,” Frasier says. “We’ve been serious about doing a beautiful, elegant restaurant. If you damp it down, you lose people.”

But fine dining is “broadening,” she says, “with even those chefs who strive for the highest Michelin ratings wanting something more playful and more at ease.”

Adams seeks to attract customers who choose to dine “in all kinds of ways” from small plates to full meals and says her main courses are now “smaller and less complex than what we used to put on the plate.”

“As the population ages, people are looking for something different than they did a generation ago and don’t want that old formality all the time,” she says. “They want to dress and behave more casually.”

With its nine-course menu and $180 average per-person check, The HerbFarm in Woodinville, Wash., always has been about casual elegance, say owners Carrie Van Dyck and Ron Zimmerman. For 22 years, the restaurant has served thematic seasonal dinners with a focus on regional ingredients like truffles of the Pacific Northwest and Wagyu beef, paired with wines from the 2,500-bottle cellar.

A communal table is part of the 60-seat dining room. The restaurant’s three acres house an herb farm, and each meal starts with a “scratch and sniff” tour. An apiary, produce farm and orchard also are on the property.

Zagat Survey readers call the restaurant “likely to be the best four or five hours of your life.” Chef Kevin Luce, formerly a sous chef at the White House during the Clinton administration, serves food “inspired by the rhythms of the season,” says Van Dyck, who sees “great business” ahead in 2008.

The shifts in fine dining are not limited to metropolitan areas on the country’s coasts. George Formaro, chef-partner at Centro restaurants in Des Moines and Davenport, Iowa, as well as South Union Bread Café and South Union Bakery, sees them occurring throughout the Midwest as well.

Food, he says, is moving away from “stiff traditional” and “club food” to “simplified entrées with high-quality ingredients that allow the food to do the talking.”

Menus today forego “the fancy rhetoric” and “simply state what the food is and where it’s from,” Formaro says. “Things like free-range, organic and exotic specialty items have replaced the old-school Escoffier style of cooking that was more about preparation than origin.”

Trends such as the Slow Food movement and “Buy Fresh, Buy Local” are “really booming” in central Iowa, Formaro says.

This year, Formaro and partners will open a casual French steakhouse, Django, adds managing partner Paul Rottenberg. It reportedly will offer French cuisine such as steak frites and cassoulet, along with hamburgers prepared from a special house grind of ground beef. A focal point of the dining room will be a U-shaped bar with a chef station, Rottenberg says. Dinner will have an average tab of around $35.

Rottenberg sees a cultural shift to “more casual” in American dining, noting that, regardless of income, “fewer people want to get dressed up every time they have a great food experience.”

Des Moines, he says, has been “remarkably resilient to the ups and downs of the economy.”

“We try to avoid having any of our restaurants positioned as ‘special occasion,’” he says. “By developing concepts that mix our market share between neighborhood locals and out-of-town business travelers, we have a blend of business that hopefully remains insulated from a spike downward in any one segment.”