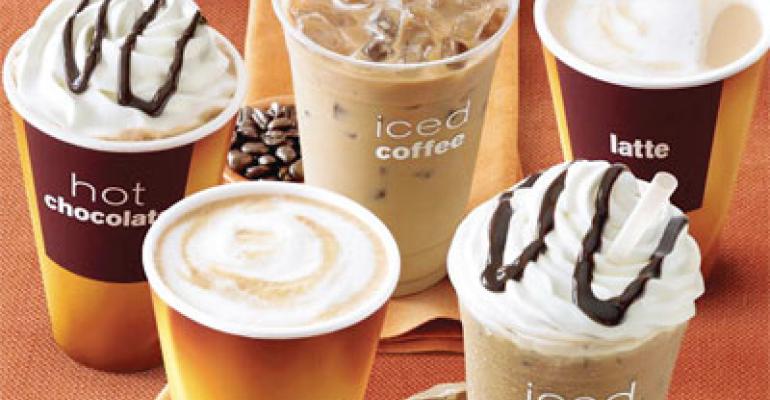 Coffee has emerged as one of America’s favorite beverages, and some experts believe it is poised to grow even more over the next 10 years, with specialty coffee drinks like lattes leading the way.

Bonnie Riggs, an analyst with The NPD Group, a consumer market research firm based in Port Washington, N.Y., said, “Coffee is forecasted to continue to be a strong growth category,” adding that the restaurant industry alone was responsible for at least 7.4 billion coffee servings in the last year.

“That is an ‘incidence’ number, in that it is probably even larger than that because we don’t track multiples or refills,” she said. “We just know that they had a cup of coffee.”
Riggs said coffee sales are largely spilt: 65-percent traditional hot-brewed coffee and 35-percent specialty coffee such as lattes and cappuccinos.

Not surprisingly, foodservice operators are responding to the growing demand for coffee.
While chains like Seattle-based Starbucks and Canton, Mass.-based Dunkin’ Donuts have built thriving businesses based on the country’s love affair with coffee, quick-service players like McDonald’s and Burger King also are planting their banners in the lucrative coffee landscape.

McDonald’s McCafé program was launched in 2009, offering lattes, mochas and smoothie-based coffee drinks. The Oak Brook, Ill.-based burger chain said it has been pleased with the success of its coffee initiative, both in the United States and overseas.

During a conference call last fall, Donald Thompson, chief operating officer of McDonald’s, said domestic coffee sales for the chain were about 2 percent in 2004.

“Total coffee’s grown to over 6 percent,” he said. “And that really includes the whole McCafé lineup.

“In the U.K., we now sell the most coffee of any other purveyors that are there,” Thompson continued. “We see opportunities in many of our other markets, whether that be in Europe [or] across the other markets.”

When McDonald’s launched the McCafé line, many observers forecasted a fierce coffee battle between McD and Starbucks — two of the industry’s giants. But Riggs said the idea that a burger chain would steal share from Starbucks or other gourmet coffee and tea purveyors is probably not the case. If anything, McDonald’s may be, in a sense, creating new markets for specialty coffee drinks.

“People in the Midwest who wouldn’t be specialty coffee drinkers or iced coffee drinkers are now increasingly ordering that product, and the hamburger category has a fairly big share of that market,” Riggs said.

Starbucks, like many mature foodservice companies, is turning its attention to international markets.

For example, China, which historically is known as a major grower of tea, is emerging as a coffee-producing and -quaffing market. Starbucks has more than 400 units in cities across mainland China. In November 2010, the chain announced a partnership with governmental organizations in China to promote responsible coffee growing. Starbucks said it will develop and operate a base farm, a coffee farmer support center and coffee processing facilities in Pu’er City in the Yunnan province of China.

With the continuing popularity of trendy cocktail bars and speakeasy-like establishments, some operators are jumping on the coffee bandwagon in an effort to bump sales. At many full-service restaurants, coffee with alcohol traditionally has meant a bit of Bailey’s, a shot of whiskey and the old drip coffee sitting behind the bar. These days, some full-service establishments are gussying up their coffee cocktail menus.

The Randolph at Broome on New York’s Lower East Side features a coffee cocktail
program that was recently featured in a New York Times Web video. The cocktail bar offers coffee drinks spiked with apple brandy and pisco brandy, among others.