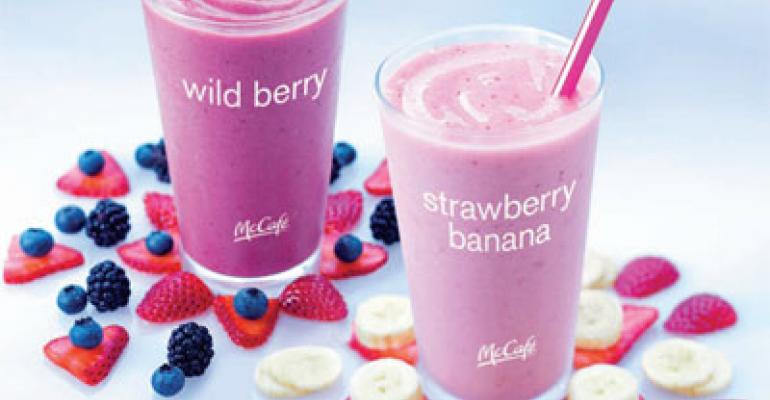 When McDonald’s introduced its Real Fruit Smoothies last July, the quick-service giant planned the following week to offer free samples promoting the new beverage line. Three days after the launch, however, the giveaway was canceled. The smoothie was already a sales success with no need for the extra marketing push.

The drinks’ popularity did not abate as 2010 wore on either, with McDonald’s attributing a 4.8-percent increase in global same-store sales in November in part to strong sales of its smoothies and frappes.

Cold nonalcoholic beverages are hot. Across the industry, operators are unleashing a flood of smoothies, teas, juices and mocktails that capitalize on consumers’ desires for drinks that are sophisticated, healthful and convenient, given their portability.

Among some recent drink introductions, the 120-unit Planet Smoothie chain in Atlanta last May said it had reformulated its offerings to have fewer calories through the use of sugar-free chocolate syrup and a proprietary stevia and agave sweetener.
Also last May, San Diego-based Jack in the Box rolled out to much of its 2,200-unit quick-service chain its Raspberry Trio, including a raspberry smoothie, a raspberry shake and brewed raspberry iced tea.

“Beverages are the most popular items ordered at restaurants in America,” said Harry Balzer, vice president of the Port Washington, N.Y.-based marketing research firm The NPD Group. “Right off the bat, a drink is a very important thing to the marketplace. It’s not a hamburger or French fries, not that those aren’t important, but beverages [represent] the biggest purchase [category].”

At Wilbraham, Mass.-based Friendly’s Corp. much of the focus is on the creation of iced tea and fruit-flavored beverages — even though the 500-plus-unit family-dining chain is generally known for its indulgent ice cream shakes and Fribbles, said corporate executive chef Andre Fuehr.

“Iced and juice beverages are check drivers” that “hold a lot of opportunity,” he said.
Teas are particularly popular at the moment, said NPD’s Balzer.

“Teas are a very hot category,” he said. “I don’t know if it’s the further movement of variety within our beverages or whether it’s viewed as a healthful product, but it’s new and we always tend to move toward new versions of things we already know.”
On tap for Friendly’s this year is the re-engineering of its Chillers line and the reintroduction of flavored teas, Fuehr said.

“Tea is actually a really popular beverage for us,” he noted. “Roughly, it [represents] 25 percent of [drinks] we serve. As a brand, we index very high on beverages. Sweet tea has proven successful, raspberry [tea] is still up there, and peach has some legs to it, but green and white teas are not so much. They’re very niche and have a lot of sugar added to them.”

There also are a lot of opportunities in the mocktail area as well, Fuehr said.

“We introduced a mocktail platform specifically for older kids that featured a Shirley Temple and a blue raspberry [drink],” he said. “We also created cotton candy and sour apple [flavors]. They were served in tall glass mugs and looked like something mom or dad got. The colors were cool and the flavors appealing.”

Friendly’s said beverages comprise approximately 10 percent of the chain’s revenues.
McDonald’s, after rolling out its McCafé coffee beverages, frappes and smoothies systemwide, is now gearing up for the launch of a frozen strawberry lemonade and the repackaging of its milkshakes, said Danya Proud, a spokeswoman for the 14,000-unit, Oak Brook, Ill.-based quick-service chain.

“We are in the process of testing the strawberry lemonade and have received positive feedback, but we don’t know when the [systemwide] rollout will be,” she said.
The product, available in 12-, 16- and 22-ounce sizes, is in test in four markets in Michigan and Texas. Prices range from $1.59 to $2.19.

Proud said the repackaging of McDonald’s milkshakes also is in test.

“We’re looking at [putting] our shakes in McCafé cups with whipped cream and a cherry,” Proud said. “It’s really to bring back to our customers a product they love, but something we haven’t changed in some time. We want to make it more contemporary and relevant, more appealing.”