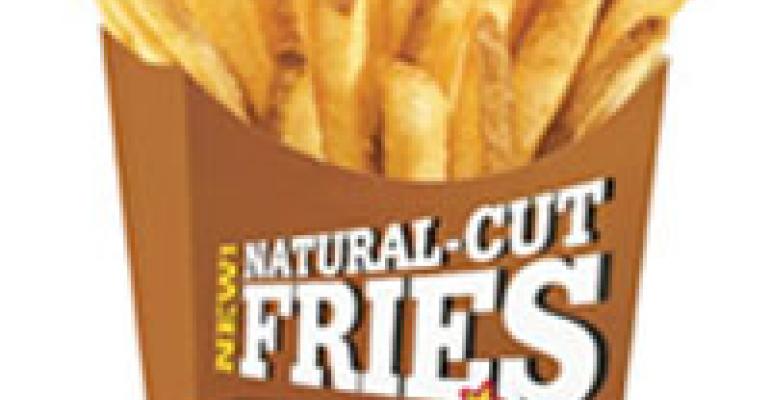 Americans have been in love with French fries since fast feeders first made them popular in the 1950s. But while many nutrition-minded observers have called into question the healthfulness of French fries over the years, little has dulled consumers’ taste for the fried spud strips—until now.

According to The NPD Group, servings of the popular fried potato side have been declining since 2006 and took a huge dive this year. There were slightly less than 2 billion servings of French fries sold at restaurants in the year ended in February, compared with nearly 2.1 billion a year earlier, according to Port Washington, N.Y.-based NPD. While weak industry traffic is contributing to the decline, greater availability of other side options, a desire for more healthful choices and demand for better value are among the major factors contributing to the slippage in servings, officials of the market research firm say.

“When the economy rebounds, [French fries] will get stronger…growth in lunch and supper will help the product, but these other things aren’t going to go away,” said NPD analyst Bonnie Riggs.

Though the decline in fries affects the quick-service segment most, it is occurring in all segments, NPD found. In the year ended in February, servings of French fries within quick service were down 3 percent from a year earlier. Quick service accounts for 89 percent of fry servings, with major hamburger chains accounting for a huge portion of those servings. When major hamburger chains were excluded from the survey, servings of fries fell 8 percent from the year earlier.

A combination of factors is contributing to the downturn in servings of fries at quick-service hamburger outlets, Riggs said.

Consumers are making fewer visits to quick-service hamburger outlets during lunch and dinner, the two most important dayparts for French fries. In the year ended in February, lunch traffic at quick-service hamburger places was flat, while servings of fries were down 1 percent. Traffic was down 2 percent at dinner, and servings of fries were also down 2 percent at the evening meal.

Another major factor is that the importance of French fries as part of combo meals has been declining for several years. In the year ended in February, only about 75 percent of combo meals ordered during lunch or dinner included fries, down from roughly 80 percent just five years ago. In the year ended in February, 32 percent of fry servings ordered as part of a combo meal were ordered at dinner and servings declined 7 percent, NPD found. During the same period, nearly 60 percent of fries ordered in a combo meal were ordered at lunch, and servings declined 1 percent.

While Riggs attributes the decline of fries in combo meals to the increasing number of side-dish choices, including options such as salads, fruit, chili and chicken soup, she says that’s only one piece of it.

“Even these chains that don’t have choices for the combo meal are experiencing declines in servings of French fries,” Riggs said.

While Riggs said financial woes are forcing 18-to-24-year-olds to cut back on visits to hamburger outlets and on fry servings, she said the shift away from fries for younger diners is likely due to moms choosing from among the more nutritious or healthful options now available.

Despite consumers’ changing behavior, fries are still the most popular side dish at Oak Brook, Ill.-based McDonald’s, which sells nearly 3 billion servings annually. The No. 1 burger chain reports that it has seen increases in servings of fries year-over-year, with servings only recently going flat to negative, though not as much as the industry overall, said Danya Proud, a McDonald’s spokeswoman.

One area in which McDonald’s has seen a decline in servings of French fries is as part of its Happy Meals. Proud said there has been a slight trade-off from fries to Apple Dippers, the chain’s sliced-apple side dish.

“We expected that…that was the purpose…to provide the choice,” Proud said.

Other operators that continue to do well with fries are taking a variety of approaches to keep consumers interested.

For Carpinteria, Calif.-based CKE Restaurants, the parent company of the Hardee’s and Carl’s Jr. chains, a fry upgrade was the solution. Last year, the classic shoestring French fries available at the more than 1,900 Hardee’s restaurants were replaced with a new thick-cut, skin-on variety similar to those served at many sit-down restaurants. The product has done so well that that it will also be rolled out at the 1,141-unit Carl’s Jr. chain beginning the first week of July, according to the company.

“Fries haven’t really changed that much [over the years],” said Brad Haley, executive vice president of marketing for Carl’s Jr. and Hardee’s. “We have tried to upgrade the quality of our fries…we haven’t left them at status quo.”

Better quality is one reason consumers are eating up Hardee’s new fries, Haley said, but value is the other reason. Priced at $1.39 for a small, $1.59 for a medium and $1.79 for a large, the new fries are just 10 cents more each than their predecessors.

At Tampa, Fla.-based Evos, more healthful fries are the recipe for success. The five-unit fast-food chain reports that its Airfries, medium-cut Idaho potatoes baked crispy with vegetable oil in a hotair oven, are part of the majority of its combo meals and are rarely substituted out.

“[It’s] a basic fry: no frills, no add-ons,” said Evos founder Dino Lambridis. “We like it because of the way it makes you feel.”