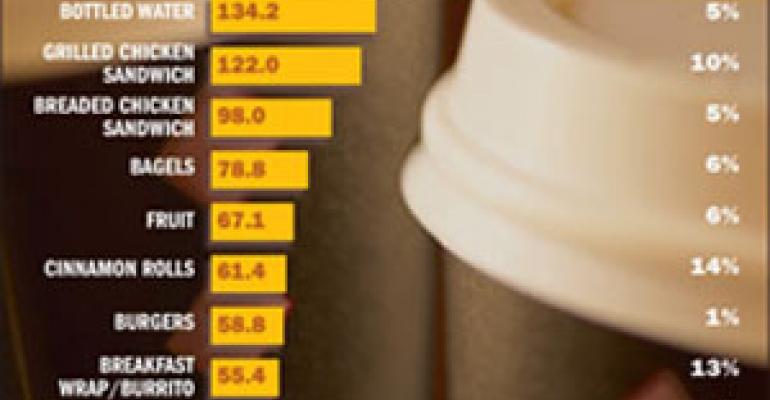 It may be among the worst of times for the foodservice industry, but it’s definitely the best of times for certain food and beverage products, most notably chicken sandwiches, breakfast sandwiches and specialty coffee.

While foodservice traffic advanced barely 1 percent in 2007, those food and beverage items made strong incremental gains in servings and have appeared more frequently on restaurant menus, according to new data from market research firms The NPD Group and Datassential.

“When the restaurant industry is faced with challenges like it is at the moment, it’s essential to know what consumers are flocking to,” said Michele Schmal, vice president of product management in foodservice at NPD.

Growth in servings of both chicken sandwiches and breakfast sandwiches can be traced directly to value menus. Even though specialty coffee is rarely found on those types of menus, iced coffee is increasingly appearing on quick-service combo meals, Schmal noted.

“While there is no question that operators have to focus on a value offering to increase guest counts in this economy, offering new products with a value twist may be the way to bring some excitement to guests,” Schmal said.

When it comes to chicken sandwiches, operators across nearly all segments are trying to give consumers obsessed with new products something to get excited about. According to Los Angeles-based Datassential, which tracks restaurant menus, chicken sandwiches, long a menu staple, have grown 9 percent on menus in the past 2 years, and the number of restaurants offering them has increased by more than 4 percent since 2005.

But operators aren’t serving up the same old chicken sandwiches.

Cheese topped more chicken sandwiches in 2007 than it did two years ago, according to Datassential. While traditional cheeses like Swiss, mozzarella, Cheddar and provolone remain popular, specialty cheeses like pepper-Jack, feta and Asiago are growing at double-digit rates. Sauces such as ranch, Caesar, bleu cheese, pesto and chipotle also have experienced double-digit growth.

It’s not just what’s on the chicken that’s appealing to consumers. It’s also important what the chicken is served in. According to Datassential, the No. 1 bread for chicken sandwiches is a wrap. In 2007, 22 percent of all restaurants offered a chicken sandwich in a wrap, up from just 16 percent in 2005. During the same period, the roll, once the top bread for chicken sandwiches, fell to second place, followed by buns, sub rolls, wheat bread, Kaiser rolls and pita bread. In addition, artisanal breads such as focaccia, ciabatta and panini appeared on more menus in 2007 than ever before.

Few appreciate the popularity of the chicken wrap more than Oak Brook, Ill.-based McDonald’s, which long has featured chicken sandwiches on its menu and has enjoyed huge success with its Snack Wrap, a downsized version of its signature chicken served grilled or crispy, wrapped in a flour tortilla and topped with ranch, honey mustard or chipotle sauce. Launched in 2006 and priced at about $1.29 each, the handheld wrap is designed to appeal to consumers’ increasing desire for portability, quality and value, the chain said.

“We have always known that chicken is an important protein for our customers,” said Danya Proud, a spokesperson for McDonald’s USA. “We are really starting to appeal to and provide choices for a wider audience.”

Though NPD found that the servings growth of breaded chicken sandwiches and nonfried chicken sandwiches can be attributed primarily to the quick-service hamburger segment, more major chains in other segments have launched chicken sandwiches of their own in the past 12 months. Examples include Bakers Square’s Chicken Avocado Ciabatta, made with grilled chicken, guacamole and Cilantro-Ranch dressing layered with pepper-Jack and tomato and stuffed into a garlic butter grilled ciabatta; and Friendly’s Southwestern Chicken SuperMelt, with crispy chicken strips tossed in chipotle sauce, topped with bacon and melted pepper-Jack cheese on grilled sourdough.

Building on its successful Supreme Omelet line, Dunkin’ Donuts recently rolled out the Bacon Lover’s Supreme Omelet Sandwich, an omelet with assorted vegetables, three slices of thick pepper bacon and Colby-Jack cheese on a croissant. Among the new breakfast sandwiches featured at the fast-casual Au Bon Pain is the Portobello, Egg and Cheddar, featuring portobello mushrooms, eggs and Cheddar cheese on ciabatta bread.

Nearly all types of specialty coffee, except for flavored coffees, saw double-digit incremental-servings growth in 2007, according to NPD. Hot cappuccino/espresso/latte is the largest segment and registered double-digit growth. But the iced/frozen/slushy segment—particularly iced coffee—enjoyed even stronger growth.

“We see more of the QSR guys adding these to value menus, and that’s really helping to support the growth,” Schmal said.

Although it’s not on the value menu, Miami-based Burger King’s new Mocha BK Joe Iced Coffee has been driving up coffee business exponentially ever since it was launched last spring, the chain said. A twist on the classic coffee on the rocks, Mocha BK Joe is coffee blended with chocolate syrup and poured over ice priced at just $1.99.

“People are looking for a great value, but they’re not going to sacrifice taste or quality,” said John Schaufelberger, senior vice president of global product innovation at Burger King. “It’s a great cup of iced coffee. You don’t need to drop three or four dollars at Starbucks when you can get a Mocha BK Joe.”

The product has been so successful, particularly in the afternoon and late at night, that the No. 2 burger chain plans to test double mocha, caramel and hazelnut flavors, Schaufelberger added.