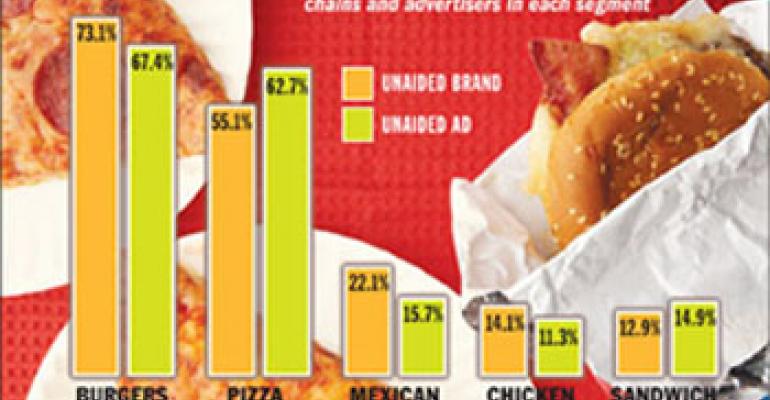 It’s a tough time to be running a pizza restaurant, but it shouldn’t be that way, according to market research firm The NPD Group.

While traffic at quick-service pizza chains has been sluggish for some time, the category remains top of mind for many consumers, who tend to be an extremely loyal group once they choose a brand, according to new data from Port Washington, N.Y.-based NPD.

“Pizza traffic is down overall, but there’s a silver lining…ways for pizza places to focus on loyal customers,” said Dana Leo, NPD product manager for foodservice. “[However,] loyalty is a very local phenomena and it’s impossible to make good decisions about your product without understanding the local market.”

While consumers may not be visiting quick-service pizza places as often as they used to, they have pizza on the brain, nonetheless. When asked to name the first fast-food places that come to mind, consumers surveyed by NPD named pizza chains more often than any other category except hamburger chains. Seventy-three percent of respondents named hamburger chains and 55 percent named pizza chains. Less than one-quarter of respondents named Mexican chains, just 14 percent named chicken chains and only 13 percent named sandwich chains.

“The advertising awareness for pizza outpaces even a high level of brand awareness,” Leo said. “Pizza places are doing a better job at advertising than they are at building their brand…so this is an opportunity to look at building a brand.”

Consumers across the country eat pizza, but in each market they do so with varying degrees of frequency, NPD found. For example, in the West Coast market, which includes Los Angeles, Seattle, San Diego, Sacramento, Calif., San Francisco and Portland, Ore., the biggest number of frequent pizza customers can be found in Los Angeles and San Diego. In the quarter ended in March, of those consumers who said they’d visited a pizza restaurant yesterday, only those cities registered double-digit responses. During the same period, no other West Coast area registered as many consumers who’d said they’d visited in the last month, and only Los Angeles and San Diego registered double digits of consumers who said they’d visited a pizza place in the last three months. Nearly all areas had huge percentages of consumers who said they had not visited such restaurants in more than three months.

“[In these markets] there’s a big opportunity to bring people in more frequently,” Leo said.

“Frequency is the key—those who visit more often are more loyal,” Leo said. “[Operators have to] incentivize people to increase their frequency.”

“[There’s] a small, hard-core group that’s loyal to pizza restaurants,” Leo said. “To build traffic, [operators] need to tap into some of these other groups.”

The different pizza purchase behaviors exhibited in Los Angeles and Sacramento further suggest that to increase and sustain business, operators need to define their strategy market by market, NPD found. While a large percentage of consumers are frequent users of the three major pizza chains in Los Angeles, the market also has a significant number of infrequent and lapsed users. In the quarter ended in March, 12 percent of consumers there said they’d visited a pizza chain yesterday, 9 percent said they visited in the last month and nearly 10 percent said they’d visited in the last three months. However, more than half of respondents said they’d not visited in more than three months.

“If you’re trying to build loyalty in L.A., you would really look at the 51 percent of people who are lapsed users,” Leo said. “So marketing programs designed to bring them through the door have a huge opportunity.”

While Sacramento’s percentage of frequent and infrequent pizza users is similar to that of Los Angeles, the River City also has a huge percentage of consumers who said they rarely or never visited one of the area’s nine major pizza chains. In the quarter ended in March, 45 percent of respondents said they had not visited a pizza chain in more than three months and more than 30 percent said they’d never visited one.

Loyalty isn’t all that drives frequent users back to their favorite chains, NPD found. In the quarter ended in March, frequent visitors who would recommend a pizza place said the top reasons they’d revisit were “good price,” “quality of food,” “convenient location” and “always/regularly go there.”

Though traffic is down in the category overall, it’s been a banner year for Vancouver, Wash.-based Papa Murphy’s, said officials of the nearly 1,100-unit pizza chain.

“For years you saw a lot of sameness…all [the big chains were] doing delivery deals,” said Mark Strickler, vice president of brand marketing for Papa Murphy’s. “I’m not surprised the consumer has a tough time differentiating.”

While Papa Murphy’s is inherently different than most of its competitors because it’s a take-and-bake concept, Strickler says what really sets the chain apart is the uniqueness and quality of its offerings. Earlier this year the chain introduced the thin-crust Chicken Bacon Artichoke pizza with half the fat and half the calories of Papa Murphy’s regular pizzas that has “driven sales amazingly,” he said.

“You not only can’t get that at our competitors, you can’t get it anywhere,” Strickler said of the new pizza.

Another way Papa Murphy’s keeps customers coming back is through its three-year-old e-club, which regularly provides to customers who sign up special e-mail offers based on their location. Strickler said participation in the club has grown more than 250 percent in the last two years.

Experts agree that local marketing is more important than ever.

“[In this economy], people are not going to drive across town for pizza,” said Marc Slutsky, chief operating officer at Gahanna, Ohio-based Streetfighter Marketing. “[Operators have to] market to [their] geographic target area.”

While he advises clients to use a mix of media to reach their targeted customers, Slutsky says pizza operators don’t need to spend a lot of dough to increase traffic. Luring new customers by doling out product samples and bringing back less frequent users by distributing coupons through noncompeting local businesses are just two of the low-cost, localized solutions he suggested.